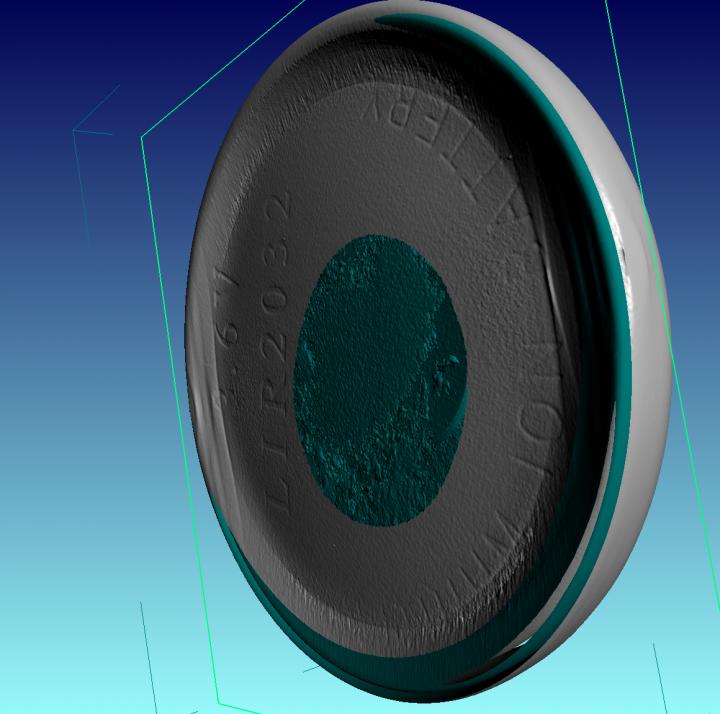 This is a full x-ray reconstruction of a coin cell supercapacitor. Source: William Kuykendall

Supercapacitors are an aptly named type of device that can store and deliver energy faster than conventional batteries. They are in high demand for applications including electric cars, wireless telecommunications and high-powered lasers.

But to realize these applications, supercapacitors need better electrodes, which connect the supercapacitor to the devices that depend on their energy. These electrodes need to be both quicker and cheaper to make on a large scale and also able to charge and discharge their electrical load faster. A team of engineers at the University of Washington thinks they’ve come up with a process for manufacturing supercapacitor electrode materials that will meet these stringent industrial and usage demands.

The researchers, led by UW assistant professor of materials science and engineering Peter Pauzauskie, published a paper on July 17 in the journal Nature Microsystems and Nanoengineering describing their supercapacitor electrode and the fast, inexpensive way they made it. Their novel method starts with carbon-rich materials that have been dried into a low-density matrix called an aerogel. This aerogel on its own can act as a crude electrode, but Pauzauskie’s team more than doubled its capacitance, which is its ability to store electric charge.

“In industrial applications, time is money,” said Pauzauskie. “We can make the starting materials for these electrodes in hours, rather than weeks. And that can significantly drive down the synthesis cost for making high-performance supercapacitor electrodes.”

Effective supercapacitor electrodes are synthesized from carbon-rich materials that also have a high surface area. The latter requirement is critical because of the unique way supercapacitors store electric charge. While a conventional battery stores electric charges via the chemical reactions occurring within it, a supercapacitor instead stores and separates positive and negative charges directly on its surface.

“Supercapacitors can act much faster than batteries because they are not limited by the speed of the reaction or byproducts that can form,” said co-lead author Matthew Lim, a UW doctoral student in the Department of Materials Science & Engineering. “Supercapacitors can charge and discharge very quickly, which is why they’re great at delivering these ‘pulses’ of power.”

“They have great applications in settings where a battery on its own is too slow,” said fellow lead author Matthew Crane, a doctoral student in the UW Department of Chemical Engineering. “In moments where a battery is too slow to meet energy demands, a supercapacitor with a high surface area electrode could ‘kick’ in quickly and make up for the energy deficit.”

To get the high surface area for an efficient electrode, the team used aerogels. These are wet, gel-like substances that have gone through a special treatment of drying and heating to replace their liquid components with air or another gas. These methods preserve the gel’s 3-D structure, giving it a high surface area and extremely low density. It’s like removing all the water out of Jell-O with no shrinking.

“One gram of aerogel contains about as much surface area as one football field,” said Pauzauskie.

Crane made aerogels from a gel-like polymer, a material with repeating structural units, created from formaldehyde and other carbon-based molecules. This ensured that their device, like today’s supercapacitor electrodes, would consist of carbon-rich materials.

Previously, Lim demonstrated that adding graphene — which is a sheet of carbon just one atom thick — to the gel imbued the resulting aerogel with supercapacitor properties. But, Lim and Crane needed to improve the aerogel’s performance, and make the synthesis process cheaper and easier.

In Lim’s previous experiments, adding graphene hadn’t improved the aerogel’s capacitance. So they instead loaded aerogels with thin sheets of either molybdenum disulfide or tungsten disulfide. Both chemicals are used widely today in industrial lubricants.

The researchers treated both materials with high-frequency sound waves to break them up into thin sheets and incorporated them into the carbon-rich gel matrix. They could synthesize a fully-loaded wet gel in less than two hours, while other methods would take many days.

After obtaining the dried, low-density aerogel, they combined it with adhesives and another carbon-rich material to create an industrial “dough,” which Lim could simply roll out to sheets just a few thousandths of an inch thick. They cut half-inch discs from the dough and assembled them into simple coin cell battery casings to test the material’s effectiveness as a supercapacitor electrode.

Not only were their electrodes fast, simple and easy to synthesize, but they also sported a capacitance at least 127 percent greater than the carbon-rich aerogel alone.

Lim and Crane expect that aerogels loaded with even thinner sheets of molybdenum disulfide or tungsten disulfide — theirs were about 10 to 100 atoms thick — would show an even better performance. But first, they wanted to show that loaded aerogels would be faster and cheaper to synthesize, a necessary step for industrial production. The fine-tuning comes next.

The team believes that these efforts can help advance science even outside the realm of supercapacitor electrodes. Their aerogel-suspended molybdenum disulfide might remain sufficiently stable to catalyze hydrogen production. And their method to trap materials quickly in aerogels could be applied to high capacitance batteries or catalysis.