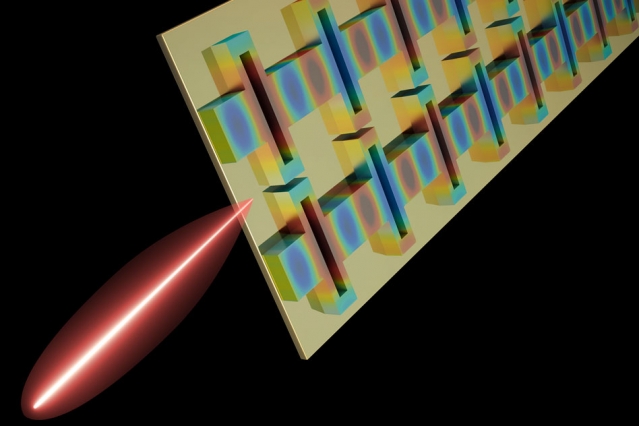 A tiny terahertz laser designed by MIT researchers is the first to reach three key performance goals at once: high power, tight beam, and broad frequency tuning. Image: Courtesy of the researchers

A terahertz laser designed by MIT researchers is the first to reach three key performance goals at once — high constant power, tight beam pattern, and broad electric frequency tuning — and could thus be valuable for a wide range of applications in chemical sensing and imaging.

The optimized laser can be used to detect interstellar elements in an upcoming NASA mission that aims to learn more about our galaxy’s origins. Here on Earth, the high-power photonic wire laser could also be used for improved skin and breast cancer imaging, detecting drugs and explosives, and much more.

The laser’s novel design pairs multiple semiconductor-based, efficient wire lasers and forces them to “phase lock,” or sync oscillations. Combining the output of the pairs along the array produces a single, high-power beam with minimal beam divergence. Adjustments to the individual coupled lasers allow for broad frequency tuning to improve resolution and fidelity in the measurements.

“People have done frequency tuning in lasers, or made a laser with high beam quality, or with high continuous wave power. But each design lacks in the other two factors,” says Ali Khalatpour, a graduate student in electrical engineering and computer science and first author on a paper describing the laser, published in Nature Photonics.

“This is the first time we’ve achieved all three metrics at the same time in chip-based terahertz lasers.”

“It’s like ‘one ring to rule them all,’” Khalatpour adds, referring to the popular phrase from The Lord of the Rings.

Joining Khalatpour on the paper are Qing Hu, a distinguished professor of electrical engineering and computer science at MIT who has done pioneering work on terahertz quantum cascade lasers; and John L. Reno of the Sandia National Laboratories.

For a component of the GUSTO chemical detector, NASA selected a novel semiconductor-based terahertz laser previously designed by the MIT researchers. It is currently the best-performing terahertz laser. Such lasers are uniquely suited for spectroscopic measurement of oxygen concentrations in terahertz radiation, the band of the electromagnetic spectrum between microwaves and visible light.

Terahertz lasers can send coherent radiation into a material to extract the material’s spectral “fingerprint.” Different materials absorb terahertz radiation to different degrees, meaning each has a unique fingerprint that appears as a spectral line. This is especially valuable in the 1 to 5 terahertz range.

For contraband detection, for example, heroin’s signature is seen around 1.42 and 3.94 terahertz, and cocaine’s at around 1.54 terahertz.

Like many lasers, these are bidirectional, meaning they emit light in opposite directions, which makes them less powerful. In traditional lasers, that issue is easily remedied with carefully positioned mirrors inside the laser’s body. But it’s very difficult to fix in terahertz lasers, because terahertz radiation is so long, and the laser so small, that most of the light travels outside the laser’s body.

In the laser selected for GUSTO, the researchers had developed a novel design for the wire lasers’ waveguides — which control how the electromagnetic wave travels along the laser — to emit unidirectionally. This achieved high efficiency and beam quality, but it didn’t allow frequency tuning, which NASA required.

Building on their previous design, Khalatpour took inspiration from an unlikely source: organic chemistry. While taking an undergraduate class at MIT, Khalatpour took note of a long polymer chain with atoms lined along two sides. They were “pi-bonded,” meaning their molecular orbitals overlapped to make the bond more stable.

The researchers applied the concept of pi-bonding to their lasers, where they created close connections between otherwise-independent wire lasers along an array. This novel coupling scheme allows phase-locking of two or multiple wire lasers.

To achieve frequency tuning, the researchers use tiny “knobs” to change the current of each wire laser, which slightly changes how light travels through the laser — called the refractive index. That refractive index change, when applied to coupled lasers, creates a continuous frequency shift to the pair’s center frequency.

For experiments, the researchers fabricated an array of 10 pi-coupled wire lasers. The laser operated with continuous frequency tuning in a span of about 10 gigahertz, and a power output of roughly 50 to 90 milliwatts, depending on how many pi-coupled laser pairs are on the array. The beam has a low beam divergence of 10 degrees, which is a measure of how much the beam strays from its focus over distances.

The researchers are also currently building a system for imaging with high dynamic range — greater than 110 decibels — which can be used in many applications such as skin cancer imaging. Skin cancer cells absorb terahertz waves more strongly than healthy cells, so terahertz lasers could potentially detect them. The lasers previously used for the task, however, are massive and inefficient, and not frequency-tunable. The researchers’ chip-sized device matches or outstrips those lasers in output power, and offers tuning capabilities.

“Having a platform with all those performance metrics together … could significantly improve imaging capabilities and extend its applications,” Khalatpour says.

“This is very nice work — in the THz [range] it has been very difficult to obtain high power levels from lasers simultaneous with good beam patterns,” says Benjamin Williams, associate professor of physical and wave electronics at the University of California at Los Angeles.

“The innovation is the novel way they have used to couple the multiple wire lasers together. This is tricky, since if all of the lasers in the array don’t radiate in phase, then the beam pattern will be ruined. They have shown that by properly spacing adjacent wire lasers, they can be coaxed into ‘wanting’ to operate in a coherent symmetric supermode — all collectively radiating together in lockstep. As a bonus, the laser frequency can be tuned … to the desired wavelength — an important feature for spectroscopy and … for astrophysics.”