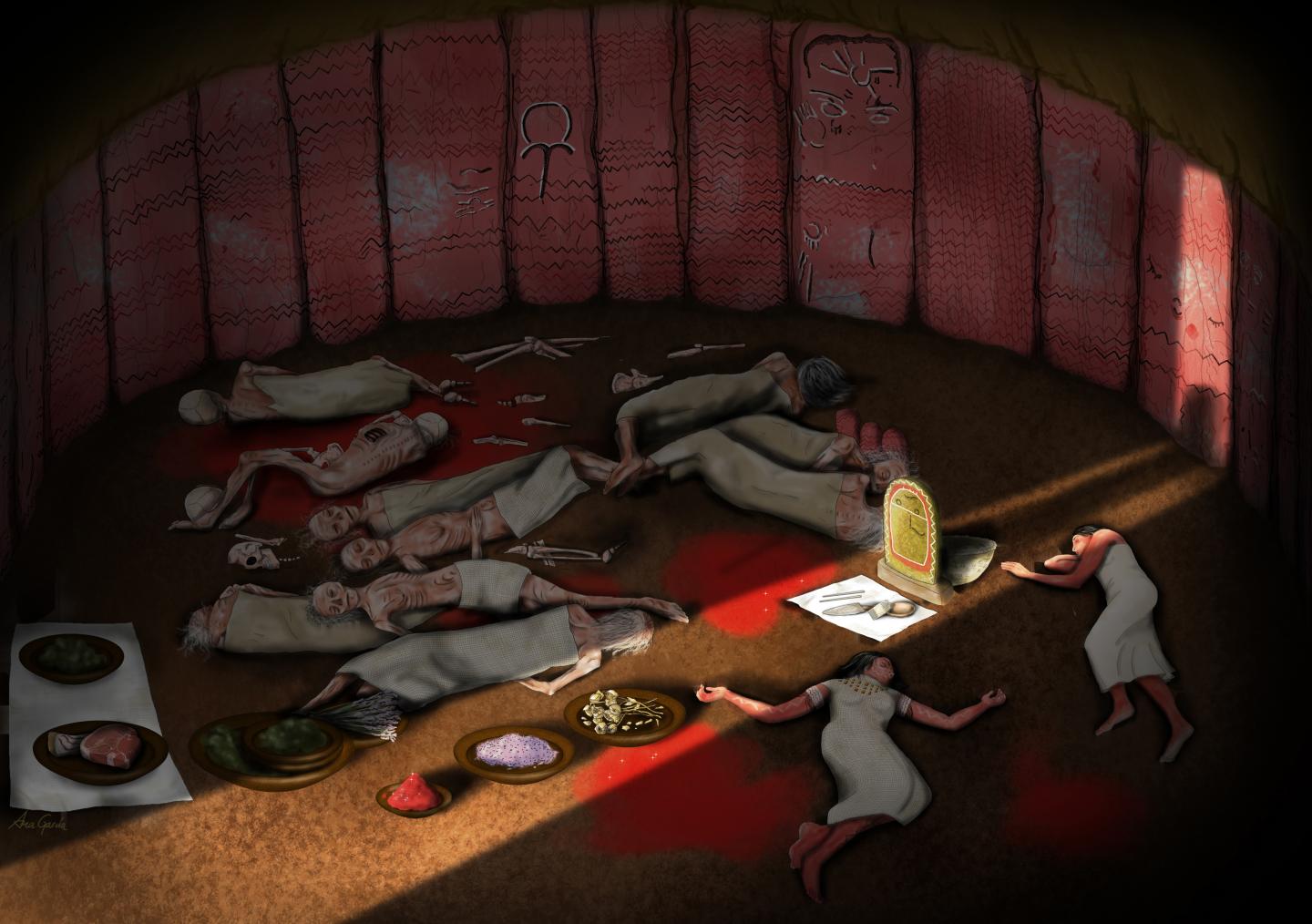 Artistic reconstruction of the Great Chamber of the Montelirio tholos in the final phase of its use. Design: Ana García. Credit: ATLAS Research Group (University of Seville).

Members of the department of Prehistory and Archaeology of the University of Seville have published a study that includes 130 radiocarbon datings, obtained in laboratories in Oxford and Glasgow (United Kingdom) and in the Centro Nacional de Aceleradores – CAN (National Accelerator Centre) – at the University of Seville. Together with the 45 previous datings, with 180 C14 datings, the Archaeological Site in Valencina de la Concepción (Seville) has become the site with currently the most radiocarbon dating in all Recent Iberian Prehistory (which includes the Neolithic period, the Copper Age and the Bronze Age).

This project, the result of a five-year collaboration between the Universities of Seville, Huelva, Cardiff and the Museum of Valencina, includes a statistical modelled complex of the radiocarbon datings to give a more precise approximation of the time of use of the Valencina site, and to know in a more detailed manner the social processes and cultural phenomena that occurred there during the near thousand years that it was inhabited, between 3200 and 2300 BCE.

Among the main conclusions that are highlighted by the experts is that the oldest parts of the site, which date from the 32nd century BCE, were funerary in nature, specifically hypogeum cavities that were used for collective sequential burials (for example, this is the case with the hypogea that were found in La Huera, Castilleja de Guzmán, and in Calle Dinamarca, Valencina).

“This data is important in the debate about the nature of this great site during its long history, as it is clear that funerary practices had a determining importance in its genesis”, comments the University of Seville Professor of Prehistory Leonardo García Sanjuán.

On the other hand, obtaining a series of C14 dates for four of the great Megalithic monuments of the site has allowed for a first orientative sequence to be established for its construction and use. In this respect, it is necessary to highlight that the oldest monuments, built between the 30th and 28th centuries BCE (Cerro de la Cabeza, Structure 10.042-10.049 and the Montelirio tholos) were characterised by the use of great slabs of slate to line the walls and the chambers, which were probably made of mud dried by the sun, and by their ‘canonical’ solar orientation (to the rising or setting of the sun). After what seems like a long period in the reduction of activity in the 27th century BCE, the tholos of La Pastora was probably built, with very different architectural characteristics: without great slabs of slate, but with a roofed chamber with a false stone dome, an important technical and aesthetic innovation, and with a “heretical” orientation towards the south east, facing away from the sunrise. “It is very probable that these changes in the monumental architecture were due to were due to changes in the social and ideological sphere, including, perhaps, religious “heterodoxies”, the researcher adds.

Thirdly, the experts have shown the end of the occupation of this part of the province of Seville happened between the 24th and 23rd centuries BCE, despite evidence of it being frequented and used in the Bronze Age (c. 2200-850 BCE). “In fact, the abandonment of the site seems rather abrupt, without a gradual transition towards a different social model. The possibility that the end of the Valencina settlement was due to a social crisis has been hinted at by the dates obtained from several human skulls separated from the rest of the skeletons in a pit in a Calle Trabajadores in Valencina”, states the director of the research group.

According to the data obtained from the radiocarbon dating, all these individuals almost died at the same time, which opens the possibility of a violent episode (killing, crime or sacrifice). The fact that several of the skulls were treated in a ritual manner, showing marks of having had the flesh removed and that this ‘special’ mortuary deposit appears to be associated with the greatest collection of pottery beakers found on the site, suggests that the episode had great symbolic significance.

The paleoenvironmental data for the Mediterranean and Europe indicate that between the 24th and 23rd centuries BCE, a period of greater aridity and dryness began globally, which could have had severe consequences for many of the planet’s societies, including droughts. At this time, the Iberian Peninsula saw the end of chalcolithic way of life and the abandonment of some of the most important sites with ditched enclosures, as now seems to be the case with Valencina de la Concepción. In broad strokes, this coincides with the end of the Old Kingdom in the Nile Valley, with a great crisis that brought about the end of the period of construction of the great pyramids.

This project has been published in Journal of World Prehistory, whose cover is dedicated to the stone arrow heads from the Montelirio tholos. It is the second time in less than a year that the work of this research group in the Archaeological Area of Valencina-Castilleja has been featured on the cover of this prestigious review.