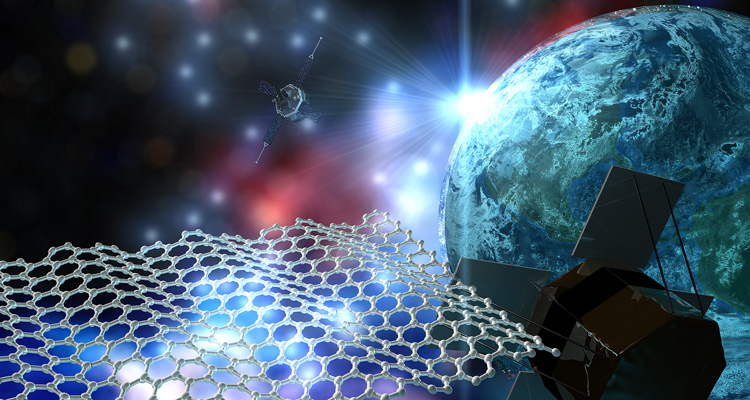 The experiment setup consists of a heterostructure of graphene and molybdenum disulphide; a spintronic device. By applying a gate voltage, it is possible to control whether the current that passes will include any spin signal or not. (Credit: Chalmers University of Technology)

By combining graphene with another two-dimensional material, researchers at Chalmers University of Technology have created a prototype of a transistor-like device for future computers, based on what is known as spintronics. Spin as the information carrier can result in electronics that are significantly faster and more energy efficient. It can also lead to more versatile components capable of both data calculation and storage. The discovery is published in the scientific journal Nature Communications.

Just over two years ago, the same research group at Chalmers University of Technology demonstrated that graphene, which is an excellent electrical conductor, also has unsurpassed spintronic properties.

The super-thin carbon mesh proved capable of conveying electrons with coordinated spin over longer distances and preserving the spin for a longer time than any other known material at room temperature.

Although the distance is still on the scale of a few micrometres and the time is still measured in nanoseconds, this in principle opened the door to the possibility of using spin in microelectronic components.

“But, it is not enough to have a good motorway for the spin signal to travel on. You also need traffic lights so the signal can be controlled,” says Associate Professor Saroj Dash, leader of the research group.

“Our new challenge became finding a material that can both convey and control the spin. It is hard, since both tasks normally require completely opposite material properties,” he explains.

Like many other researchers in the hot field of graphene, the Chalmers researchers therefore chose to test a combination of graphene and another thin, so-called two-dimensional material, with contrasting spintronic properties.

“Our material of choice was molybdenum disulphide, MoS2, due to its low spin lifetime steaming from high spin-orbit coupling,” states André Dankert, postdoc researcher in the group.

André Dankert and Saroj Dash designed an experiment where a few layers of molybdenum disulphide were placed on top of a layer of graphene in a type of sandwich, referred to as a heterostructure. With this, they could identify in detail what happens to the spin signal when the electron current reaches the heterostructure:

“Firstly, the magnitude of the spin signal and lifetime in graphene is reduced tenfold just through the close contact with molybdenum disulphide. But, we also show how one can control the signal and lifetime by applying electrical gate voltage across the heterostructure,” explains Saroj Dash.

This is because the natural energy barrier that exists between the material layers, called the Schottky barrier, reduces when the electrical voltage is applied. With this, the electrons can quantum mechanically tunnel from the graphene into the molybdenum disulphide. This causes spin polarisation to disappear; the spin becomes randomly distributed.

Opening or closing a “valve” in this manner by regulating a voltage is similar to how a transistor works in conventional electronics. Nonetheless, Saroj Dash is a little hesitant to call the device a spin transistor.

“When researchers proposed on future spin transistors, they often imagined something based on semiconductor technology and so called coherent manipulation of electron spin. What we have done works in a completely different way, but performs a similar switching task,” he says.

“This is the first time that anyone has been able to demonstrate that the gate control of spin current and spin lifetime works at room temperature – which naturally increases the possibilities for different applications in the future,” says Saroj Dash.

Although it is too early to predict what these would be, Dash points out that a component based on this principle might be extremely versatile because it contains magnetic memory elements, semiconductors and graphene, as well as having the capability of performing spintronic switching.

“It points to a multifunctional component that can handle both data storage and processor work – in a single unit.”

Molybdenum disulphide is a semiconducting substance that many have come in contact with, since it is the active ingredient in a certain type of lubricant sold at your local filling station.

With its layered structure, molybdenum disulphide has similarities to graphite, which is made up of several layers of graphene that stick together. However, when it comes to spintronics the materials are each others’ opposites. Molybdenum disulphide does not allow any polarised electron current to pass through whatsoever. The spin signal meets a sudden death since the electrons quickly return to their natural, random blend of up-spin and down-spin.

Spin is a quantum mechanical property of electrons and other elementary particles. The spin is either directed up or directed down. The distribution is normally random.

But, sometimes all or the majority of electrons in a material have their spin oriented in the same direction – up or down. This is how magnetism occurs.

With the help of magnets, an electron current can be homogenised – i.e. polarised – so that all electrons have up-spin, for example. The current is then said to carry a spin signal.

Coordinated spin is sensitive to disruptions and can be easily lost, but graphene has proven to be a conductor that allows a current to travel unusually long with its spin intact. Long enough to be able to use the spin as an information carrier in future logic components – spintronics.