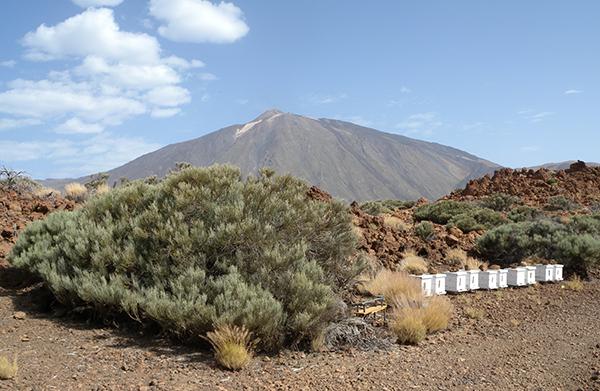 These are commercial honeybee hives in the Teide National Park, Tenerife, Spain.

The ‘die-off’ events occurring in honeybee colonies that are bred and farmed like livestock must not be confused with the conservation crisis of dramatic declines in thousands of wild pollinator species, say Cambridge researchers.

Writing in the journal Science, the conservationists argue there is a “lack of distinction” in public understanding – fuelled by misguided charity campaigns and media reports – between an agricultural problem and an urgent biodiversity issue.

In fact, they say domesticated honeybees actually contribute to wild bee declines through resource competition and spread of disease, with so-called environmental initiatives promoting honeybee-keeping in cities or, worse, protected areas far from agriculture, only likely to exacerbate the loss of wild pollinators.

“The crisis in global pollinator decline has been associated with one species above all, the western honeybee. Yet this is one of the few pollinator species that is continually replenished through breeding and agriculture,” said co-author Dr Jonas Geldmann from Cambridge University’s Department of Zoology.

“Saving the honeybee does not help wildlife. Western honeybees are a commercially managed species that can actually have negative effects on their immediate environment through the massive numbers in which they are introduced.

“Levels of wild pollinators, such as species of solitary bumblebee, moth and hoverfly, continue to decline at an alarming rate. Currently, up to 50% of all European bee species are threatened with extinction,” Geldmann said.

Honeybees are vital for many crops – as are wild pollinators, with some assessments suggesting wild species provide up to half the needed “pollinator services” for the three-quarters of globally important crops that require pollination.

However, generating honeybee colonies for crop pollination is problematic. Major flowering crops such as fruits and oilseed rape bloom for a period of days or weeks, whereas honeybees are active for nine to twelve months and travel up to 10km from their hives.

“Keeping honeybees is an extractive activity. It removes pollen and nectar from the environment, which are natural resources needed by many wild species of bee and other pollinators,” said González-Varo, also from Cambridge’s Zoology Department.

“Honeybees are artificially-bred agricultural animals similar to livestock such as pigs and cows. Except this livestock can roam beyond any enclosures to disrupt local ecosystems through competition and disease.”

As with other intensively farmed animals, overcrowding and homogenous diets have depressed bee immune systems and sent pathogen rates soaring in commercial hives. Diseases are transferred to wild species when bees feed from the same flowers, similar to germs passing between humans through a shared coffee cup.

This puts added pressure on endangered wild European bee species such as the great yellow bumblebee, which was once found across the UK but has lost 80% of its range in the last half century, and is now limited to coastal areas of Scotland.

Both wild and cultivated pollinators are afflicted by pesticides such as neonicotinoids, as well as other anthropogenic effects – from loss of hedgerows to climate change – which drive the much-publicised die-offs among farmed bees and the decline in wild pollinator species over the last few decades.

“Honeybee colony die-offs are likely to be a ‘canary in the coalmine’ that is mirrored by many wild pollinator species. The attention on honeybees may help raise awareness, but action must also be directed towards our threatened species,” said Geldmann.

“The past decade has seen an explosion in research on honeybee loss and the dangers posed to crops. Yet little research has been done to understand wild native pollinator declines, including the potential negative role of managed honeybees.”

Geldmann and González-Varo recommend policies to limit the impact of managed honeybees, including hive size limits, the moving of colonies to track the bloom of different crops, and greater controls on managed hives in protected areas.

“Honeybees may be necessary for crop pollination, but beekeeping is an agrarian activity that should not be confused with wildlife conservation,” they write.