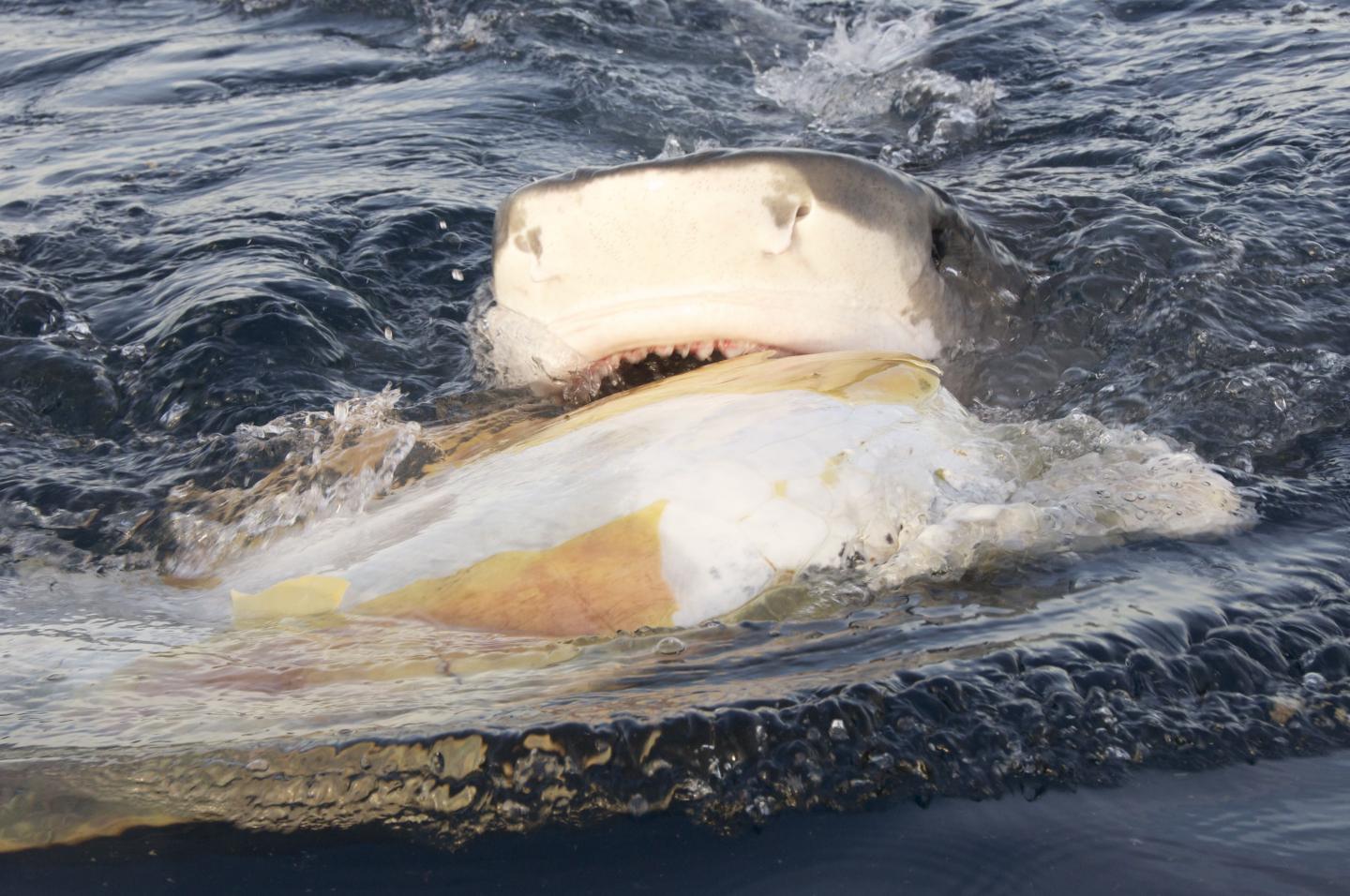 Tiger sharks are known as impressive predators that hunt and consume almost anything from birds to sea turtles. But when the opportunity presents itself, these sharks easily convert into the role of marine scavengers. This behavior was reported¹ in Springer’s journal Behavioral Ecology and Sociobiology by a team of American, Australian and British researchers led by Neil Hammerschlag of the University of Miami Rosenstiel School of Marine and Atmospheric Science in the US. They re-evaluated satellite tracking data collected from tiger sharks and green turtles off the Great Barrier Reef’s Raine Island, which is home to the world’s largest concentration of nesting green turtles.

Tiger shark (Galeocerdo cuvier) movements often overlap with those of sea turtles. When feeding on turtles, the sharks launch ambushes from below on unsuspecting turtles at the surface, limiting the ability of their prey to outmaneuver and foil attacks. As a consequence, when in areas of high shark density, turtles usually reduce their chances of becoming shark bait by spending as little time as possible close to the water surface, where their silhouettes are more easily spotted by the predators hunting below. This is the normal status quo, but not when it is nesting season on Raine Island, reports the research team. Then the sharks turn into scavengers, which saves them the effort of hunting.

Raine Island is a low-lying island in the Great Barrier Reef Marine Park that provides 32 hectares of beach sand where up to 12,000 female green turtles (Chelonia mydas) lay their eggs during nesting season. Few attacks on live turtles have ever been observed during these annual events, even though these marine reptiles are potentially very vulnerable to becoming tiger shark prey when entering and exiting the water around the island. However, nesting is very stressful and as many as 2,000 females can die during one season from exposure or exhaustion. When their carcasses are washed into the sea, they become easy pickings for the sharks.

The research team discovered that tiger sharks turn from hunters to scavengers by looking at their surfacing behavior during nesting season. To do so, they re-evaluated data obtained from an earlier study² by researchers at James Cook University and the Australian Institute of Marine Science. They found that during nesting season, tiger sharks spend the greater part of their time patrolling surface waters close to shore instead of remaining in deep water as they do when actively hunting, suggesting they are on the look-out for carcasses or weakened turtles that end up in the water. Green turtles also did not show any signs of the behaviors they typically use to avoid sharks, such as reducing their time at the surface, despite the presence of tiger sharks. These observations suggest that tiger sharks are not likely to be hunting healthy turtles during the nesting season, despite the opportunity to do so.

“For any predator, hunting and capturing prey is energetically demanding and inherently dangerous,” says Hammerschlag. “At Raine Island, although sharks can encounter and hunt thousands of healthy green turtles, the large numbers of dead and dying animals that get washed into the water during the nesting season makes it far more profitable for the sharks to scavenge on these carcasses rather than to chase live turtles, given the possibility of wasted time and energy when predation attempts are unsuccessful.”

This energy-saving switch in behavior to scavenging when faced with an abundance of food is not just typical of sharks, but also of predators such as hyenas and lions in terrestrial systems. “It goes to show that being at the top of the food chain is not just about being ferocious – it’s also about taking advantage of every opportunity to feed that comes your way, dead or alive,” says Hammerschlag.