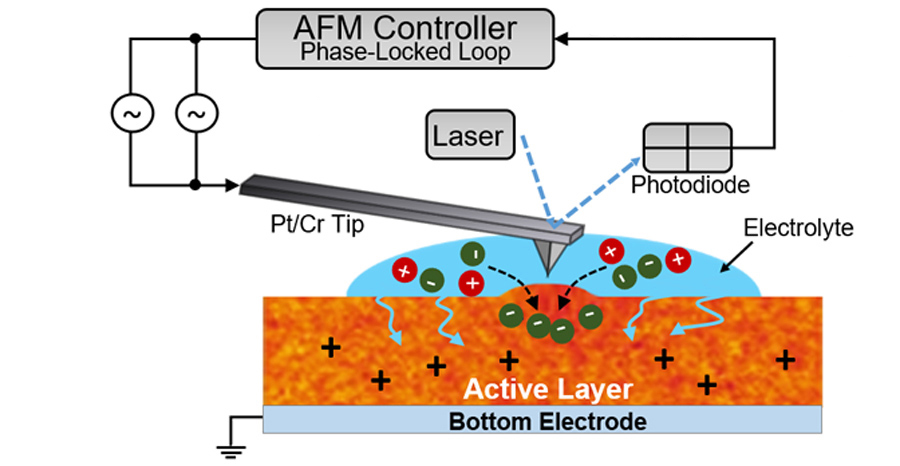 Depiction of the electrochemical strain microscopy technique used to measure which regions of the P3HT film could subtly swell to let in ion molecules. (Image: Rajiv Giridharagopal)

The problem is a fundamental incompatibility in communication styles.

That conclusion might crop up during divorce proceedings, or describe a diplomatic row. But scientists designing polymers that can bridge the biological and electronic divide must also deal with incompatible messaging styles. Electronics rely on racing streams of electrons, but the same is not true for our brains.

“Most of our technology relies on electronic currents, but biology transduces signals with ions, which are charged atoms or molecules,” said David Ginger, professor of chemistry at the University of Washington and chief scientist at the UW’s Clean Energy Institute. “If you want to interface electronics and biology, you need a material that effectively communicates across those two realms.”

Ginger is lead author of a paper published online June 19 in Nature Materials in which UW researchers directly measured a thin film made of a single type of conjugated polymer — a conducting plastic — as it interacted with ions and electrons. They show how variations in the polymer layout yielded rigid and non-rigid regions of the film, and that these regions could accommodate electrons or ions — but not both equally. The softer, non-rigid areas were poor electron conductors but could subtly swell to take in ions, while the opposite was true for rigid regions.

Organic semiconducting polymers are complex matrices made from repeating units of a carbon-rich molecule. An organic polymer that can accommodate both types of conduction — ion and electrons — is the key to creating new biosensors, flexible bioelectronic implants and better batteries. But differences in size and behavior between tiny electrons and bulky ions have made this no easy task.

Their results demonstrate how critical the polymer synthesis and layout process is to the film’s electronic and ionic conductance properties. Their findings may even point the way forward in creating polymer devices that can balance the demands of electronic transport and ion transport.

“We now understand the design principles to make polymers that can transport both ions and electrons more effectively,” said Ginger. “We even demonstrate by microscopy how to see the locations in these soft polymer films where the ions are transporting effectively and where they aren’t.”

Ginger’s team measured the physical and electrochemical properties of a film made out of poly(3-hexylthiophene), or P3HT, which is a relatively common organic semiconductor material. Lead author Rajiv Giridharagopal, a research scientist in the UW Department of Chemistry, probed the P3HT film’s electrochemical properties in part by borrowing a technique originally developed to measure electrodes in lithium-ion batteries.

The approach, electrochemical strain microscopy, uses a needle-like probe suspended by a mechanical arm to measure changes in the physical size of an object with atomic-level precision. Giridharagopal discovered that, when a P3HT film was placed in an ion solution, certain regions of the film could subtly swell to let ions flow into the film.

“This was an almost imperceptible swelling — just 1 percent of the film’s total thickness,” said Giridharagopal. “And using other methods, we discovered that the regions of the film that could swell to accommodate ion entry also had a less rigid structure and polymer arrangement.”

More rigid and crystalline regions of the film could not swell to let in ions. But the rigid areas were ideal patches for conducting electrons.

Ginger and his team wanted to confirm that structural variations in the polymer were the cause of these variations in electrochemical properties of the film. Co-author Christine Luscombe, a UW associate professor of materials science and engineering and member of the Clean Energy Institute, and her team made new P3HT films that had different levels of rigidity based on variations in polymer arrangement.

By subjecting these new films to the same array of tests, Giridharagopal showed a clear correlation between polymer arrangement and electrochemical properties. The less rigid and more amorphous polymer layouts yielded films that could swell to let in ions, but were poor conductors of electrons. More crystalline polymer arrangements yielded more rigid films that could easily conduct electrons.

These measurements demonstrate for the first time that small structural differences in how organic polymers are processed and assembled can have major consequences for how the film accommodates ions or electrons. It may also mean that this tradeoff between the needs of ion and electrons is unavoidable. But these results give Ginger hope that another solution is possible.