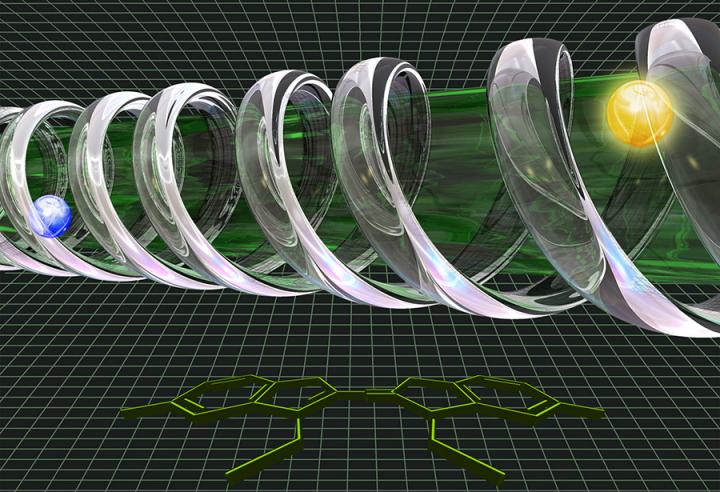 As the world struggles to meet the increasing demand for energy, coupled with the rising levels of CO2 in the atmosphere from deforestation and the use of fossil fuels, photosynthesis in nature simply cannot keep up with the carbon cycle. But what if we could help the natural carbon cycle by learning from photosynthesis to generate our own sources of energy that didn't generate CO2? Artificial photosynthesis does just that, it harnesses the sun's energy to generate fuel in ways that minimize CO2 production.

In a recent paper published in the Journal of the American Chemical Society (JACS), a team of researchers led by Hao Yan, Yan Liu and Neal Woodbury of the School of Molecular Sciences and Biodesign Center for Molecular Design and Biomimetics at Arizona State University report significant progress in optimizing systems that mimic the first stage of photosynthesis, capturing and harnessing light energy from the sun.

"Photosynthesis has mastered the art of collecting light energy and moving it over substantial distances to the right place for light-driven chemistry to take place. The problem with the natural complexes is that they are hard to reproduce from a design perspective; we can use them as they are, but we want to create systems that serve our own purposes," said Woodbury. "By using some of the same tricks as Nature, but in the context of a DNA structure that we can design precisely, we overcome this limitation, and enable the creation of light harvesting systems that efficiently transfer the energy of light were we want it."

Yan's lab has developed a way to use DNA to self-assemble structures that can serve as templates for assembling molecular complexes with almost unlimited control over size, shape and function. Using DNA architectures as a template, the researchers were able to aggregate dye molecules in structures that captured and transferred energy over tens of nanometers with an efficiency loss of <1% per nanometer. In this way the dye aggregates mimic the function of the chlorophyll-based antenna complex in natural photosynthesis by efficiently transferring light energy over long distances from the place where it is absorbed and the place where it will be used.

To further study biomimetic light harvesting complexes based on self- assembled dye-DNA nanostructures, Yan, Woodbury and Lin have received a grant from the Department of Energy (DOE). In previous DOE-funded work, Yan and his team demonstrated the utility of DNA to serve as a programmable template for aggregating dyes. To build upon these findings, they will use the photonic principles that underlie natural light harvesting complexes to construct programmable structures based on DNA self-assembly, which provides the flexible platform necessary for the design and development of complex molecular photonic systems.

"It is great to see DNA can be programmed as a scaffolding template to mimic Nature's light harvesting antennae to transfer energy over this long distance," said Yan. "This is a great demonstration of research outcome from a highly interdisciplinary team."

The potential outcomes of this research could reveal new ways of capturing energy and transferring it over longer distances without net loss. In turn, the impact from this research could lead the way designing more efficient energy conversion systems that will reduce our dependency on fossil fuels.

"I was delighted to participate in this research and to be able to build on some long term work extended back to some very fruitful collaborations with scientists and engineers at Eastman Kodak and the University of Rochester," said David G. Whitten of the University of New Mexico, Department of Chemical and Biological Engineering. "This research included using their cyanines to form aggregated assemblies where long range energy transfer between a donor cyanine aggregate and an acceptor occurs."