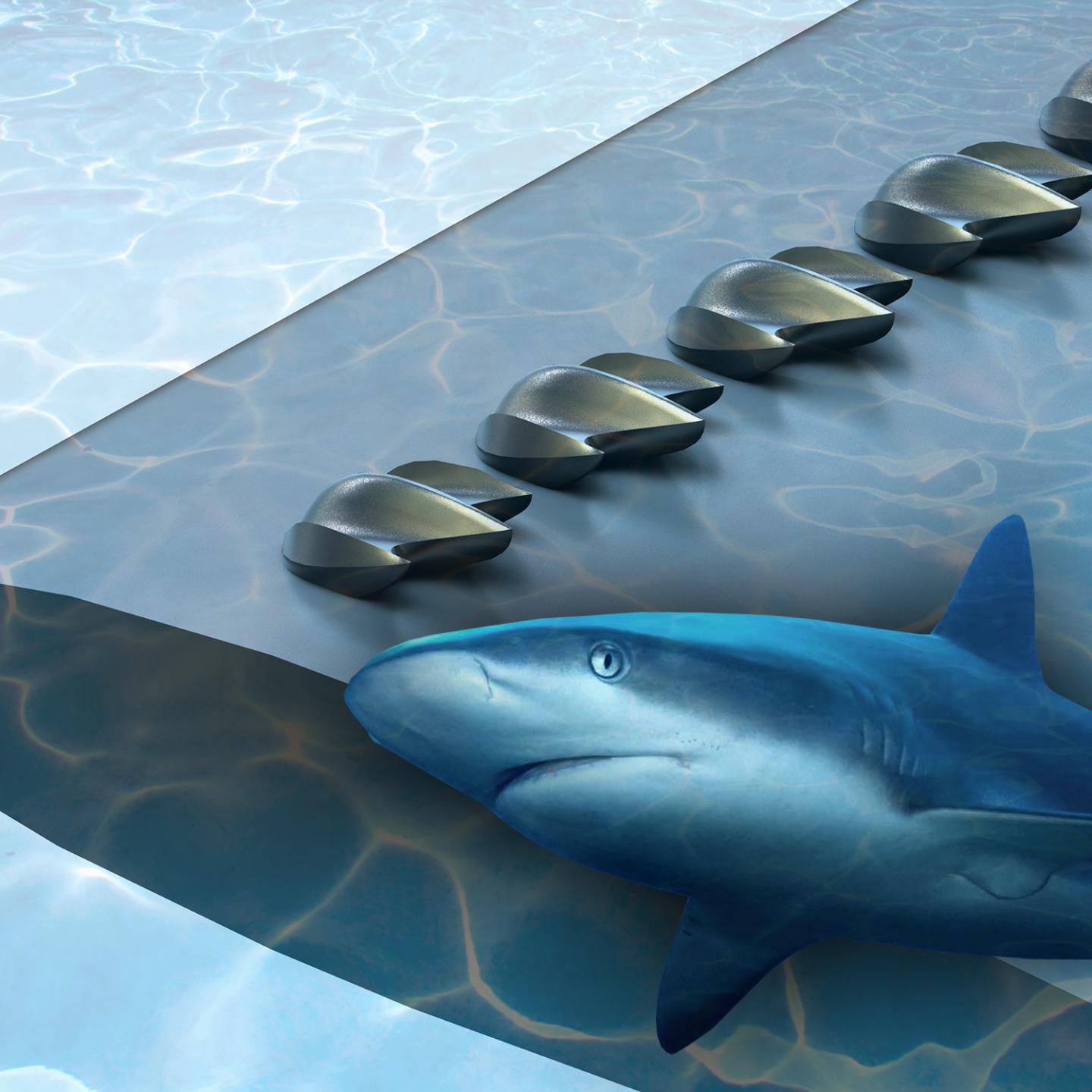 To build more aerodynamic machines, researchers are drawing inspiration from an unlikely source: the ocean.

A team of evolutionary biologists and engineers at Harvard University, in collaboration with colleagues from the University of South Carolina, have shed light on a decades-old mystery about sharkskin and, in the process, demonstrated a new, bioinspired structure that could improve the aerodynamic performance of planes, wind turbines, drones and cars.

The research is published in the Journal of the Royal Society Interface.

Sharks and airplanes aren’t actually all that different. Both are designed to efficiently move through fluid (water and air), using the shape of their bodies to generate lift and decrease drag. The difference is, sharks have about a 400 million-year head start on the design process.

“The skin of sharks is covered by thousands and thousands of small scales, or denticles, which vary in shape and size around the body,” said George Lauder, the Henry Bryant Bigelow Professor of Ichthyology and Professor of Biology in the Department of Organismic and Evolutionary Biology, and co-author of the research. “We know a lot about the structure of these denticles — which are very similar to human teeth — but the function has been debated.”

Most research has focused on the drag reducing properties of denticles but Lauder and his team wondered if there was more to the story.

“We asked, what if instead of mainly reducing drag, these particular shapes were actually better suited for increasing lift,” said Mehdi Saadat, a postdoctoral fellow at Harvard and co-first author of the study. Saadat holds a joint appointment in Mechanical Engineering at the University of South Carolina.

To help test that hypothesis, the researchers collaborated with a team of engineers from the Harvard John A. Paulson School of Engineering and Applied Sciences (SEAS). For inspiration, they turned to the shortfin mako, the fastest shark in the world. The mako’s denticles have three raised ridges, like a trident. Using micro-CT scanning, the team imaged and modeled the denticles in three dimensions. Next, they 3-D printed the shapes on the surface of a wing with a curved aerodynamic cross-section, known as an airfoil.

“Airfoils are a primary component of all aerial devices,” said August Domel, a Ph.D. student at Harvard and co-first author of the paper. “We wanted to test these structures on airfoils as a way of measuring their effect on lift and drag for applications in the design of various aerial devices such as drones, airplanes, and wind turbines.”

The researchers tested 20 different configurations of denticle sizes, rows and row positions on airfoils inside a water flow tank. They found that in addition to reducing drag, the denticle-shaped structures significantly increased lift, acting as high-powered, low-profile vortex generators.

Even if you don’t know what a vortex generator is, you’ve seen one in action. Cars and planes are equipped with these small, passive devices designed to alter the air flow over the surface of a moving object to make it more aerodynamic. Most vortex generators in the field today have a simple, blade-like design.

“You can imagine these vortex generators being used on wind turbines or drones to increase the efficiency of the blades,” said Katia Bertoldi, William and Ami Kuan Danoff Professor of Applied Mechanics at SEAS and co-author of the study. “The results open new avenues for improved, bioinspired aerodynamic designs.”

“This research not only outlines a novel shape for vortex generators but also provides insight into the role of complex and potentially multifunctional shark denticles,” said Lauder.