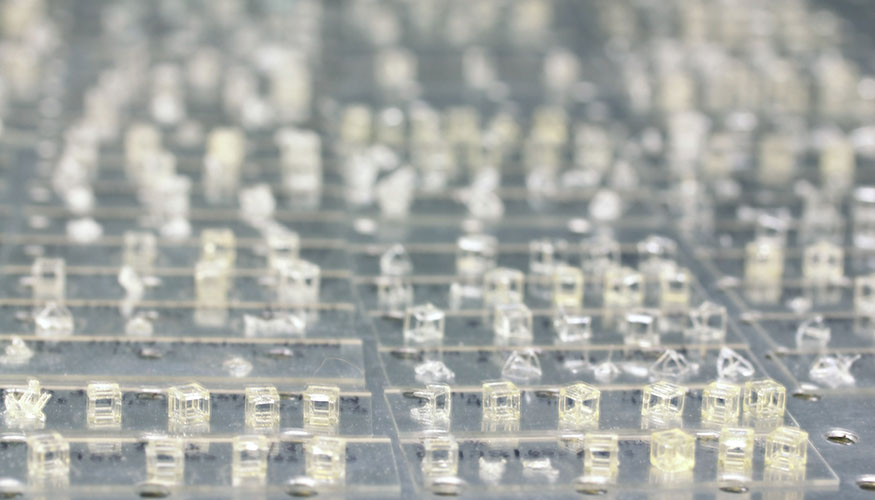 By using laser-generated, hologram-like 3D images flashed into photosensitive resin, researchers at Lawrence Livermore National Laboratory, along with academic collaborators, have discovered they can build complex 3D parts in a fraction of the time of traditional layer-by-layer printing. With this process, researchers have printed beams, planes, struts at arbitrary angles, lattices and complex and uniquely curved objects in a matter of seconds. Source: LLNL

While additive manufacturing (AM), commonly known as 3D printing, is enabling engineers and scientists to build parts in configurations and designs never before possible, the impact of the technology has been limited by layer-based printing methods, which can take up to hours or days to build three-dimensional parts, depending on their complexity.

However, by using laser-generated, hologram-like 3D images flashed into photosensitive resin, researchers at Lawrence Livermore National Laboratory (LLNL), along with collaborators at UC Berkeley(link is external), the University of Rochester(link is external) and the Massachusetts Institute of Technology(link is external) (MIT), have discovered they can build complex 3D parts in a fraction of the time of traditional layer-by-layer printing. The novel approach is called “volumetric” 3D printing, and is described in the journal Science Advances(link is external), published online Dec. 8.

“The fact that you can do fully 3D parts all in one step really does overcome an important problem in additive manufacturing,” said LLNL researcher Maxim Shusteff, the paper’s lead author. “We’re trying to print a 3D shape all at the same time. The real aim of this paper was to ask, 'Can we make arbitrary 3D shapes all at once, instead of putting the parts together gradually layer by layer?' It turns out we can.”

The way it works, Shusteff explained, is by overlapping three laser beams that define an object’s geometry from three different directions, creating a 3D image suspended in the vat of resin. The laser light, which is at a higher intensity where the beams intersect, is kept on for about 10 seconds, enough time to cure the part. The excess resin is drained out of the vat, and, seemingly like magic, researchers are left with a fully formed 3D part.

The approach, the scientists concluded, results in parts built many times faster than other polymer-based methods, and most, if not all, commercial AM methods used today. Due to its low cost, flexibility, speed and geometric versatility, the researchers expect the framework to open a major new direction of research in rapid 3D printing.

Volumetric 3D printing creates parts by overlapping three laser beams that define an object’s geometry from three different directions, creating a hologram-like 3D image suspended in the vat of resin. The laser light, which is at a higher intensity where the beams intersect, is kept on for about 10 seconds, enough time to cure the object.

“It’s a demonstration of what the next generation of additive manufacturing may be,” said LLNL engineer Chris Spadaccini, who heads Livermore Lab’s 3D printing effort. “Most 3D printing and additive manufacturing technologies consist of either a one-dimensional or two-dimensional unit operation. This moves fabrication to a fully 3D operation, which has not been done before. The potential impact on throughput could be enormous and if you can do it well, you can still have a lot of complexity.”

With this process, Shusteff and his team printed beams, planes, struts at arbitrary angles, lattices and complex and uniquely curved objects. While conventional 3D printing has difficulty with spanning structures that might sag without support, Shusteff said, volumetric printing has no such constraints; many curved surfaces can be produced without layering artifacts.

“This might be the only way to do AM that doesn’t require layering,” Shusteff said. “If you can get away from layering, you have a chance to get rid of ridges and directional properties. Because all features within the parts are formed at the same time, they don’t have surface issues.

“I’m hoping what this will do is inspire other researchers to find other ways to do this with other materials,” he added. “It would be a paradigm shift.”
Shusteff believes volumetric printing could be made even faster with a higher power light source. Extra-soft materials such as hydrogels could be wholly fabricated, he said, which would otherwise be damaged or destroyed by fluid motion. Volumetric 3D printing also is the only additive manufacturing technique that works better in zero gravity, he said, expanding the possibility of space-based production.

The technique does have limitations, researchers said. Because each beam propagates through space without changing, there are restrictions on part resolution and on the kinds of geometries that can be formed. Extremely complex structures would require lots of intersecting laser beams and would limit the process, they explained.

Spadaccini added that additional polymer chemistry and engineering also would be needed to improve the resin properties and fine tune them to make better structures.

“If you leave the light on too long it will start to cure everywhere, so there’s a timing game,” Spadaccini said. “A lot of the science and engineering is figuring out how long you can keep it on and at what intensity, and how that couples with the chemistry.”