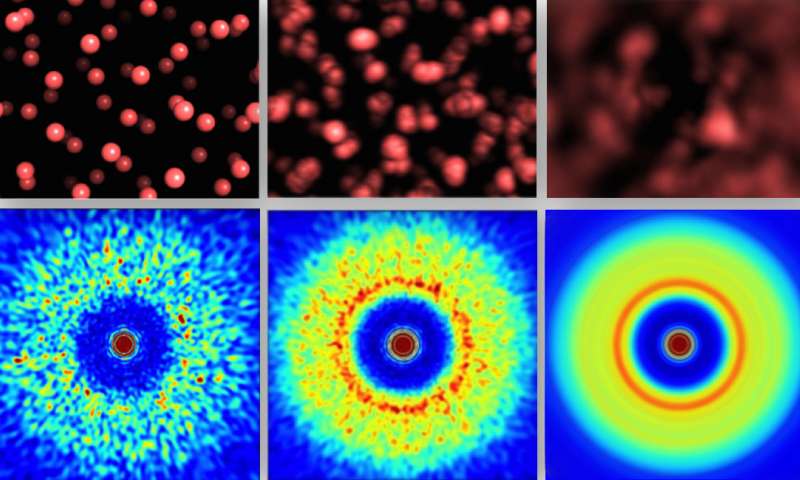 An illustration shows the “blurring” effect caused by water molecules moving during imaging with the X-ray laser. As the laser pulse gets longer, from left to right, the diffraction pattern produced by X-rays hitting the molecules changes (bottom row), reflecting the motion of the water molecules (top row). Experiments at SLAC’s LCLS X-ray laser were able to provide the timescale of the water dynamics by using pulses less than 100 millionths of a billionths of a second long. Credit: Fivos Perakis/Stockholm University Read more at: https://phys.org/news/2018-05-x-ray-laser-reveals-ultrafast-liquid.html#jCp

Water’s lack of color, taste and smell make it seem simple – and on a molecular level, it is. However, when many water molecules come together they form a highly complex network of hydrogen bonds. This network is believed to be responsible for many of the peculiar properties of liquid water, but its behavior is not yet fully understood.

Now researchers have probed the movements of molecules in liquid water that occur in less than 100 millionths of a billionth of a second, or femtoseconds. An international team led by researchers at Stockholm University carried out the experiments with the Linac Coherent Light Source (LCLS) X-ray laser at the Department of Energy’s SLAC National Accelerator Laboratory. They published their report this week in Nature Communications.

The study is the first to “photograph” water molecules on this timescale with a technique called ultrafast X-ray photon correlation spectroscopy, which bounces X-rays pulses off the molecules to produce a series of diffraction patterns. Varying the duration of the X-ray pulses essentially varies the exposure time, and any motion of the water molecules during an exposure will blur the resulting picture. By analyzing the blurring produced by different exposure times, the scientists were able to extract information about the molecular motion.

On this timescale, it was assumed that water molecules move randomly due to heat, behaving more like a gas than a liquid. However, the experiments indicate that the network of hydrogen bonds plays a role even on this ultrafast timescale, coordinating the motions of water molecules in an intricate dance, which becomes even more pronounced when water is “supercooled” below its normal freezing point.

“The key to understanding water on a molecular level is watching the changes of the hydrogen-bond network, which can play a major role in biological activity and life as we know it,” says Anders Nilsson, a professor at Stockholm University and former professor at SLAC.

Adds Stockholm University researcher Fivos Perakis, “It is a brand-new capability to be able to use X-ray lasers to see the motion of molecules in real time. This can open up a whole new field of investigations on these timescales, combined with the unique structural sensitivity of X-rays.”

The experimental results were reproduced by computer simulations, which indicate that the coordinated dance of water molecules is due to the formation of transient tetrahedral structures.

“I have studied the dynamics of liquid and supercooled water for a long time using computer simulations, and it is very exciting to finally be able to directly compare with experiments,” says Gaia Camisasca, a postdoctoral researcher at Stockholm University who performed the computer simulations for this study. “I look forward to seeing the future results that can come out from this technique, which can help improve the current water computer models.”