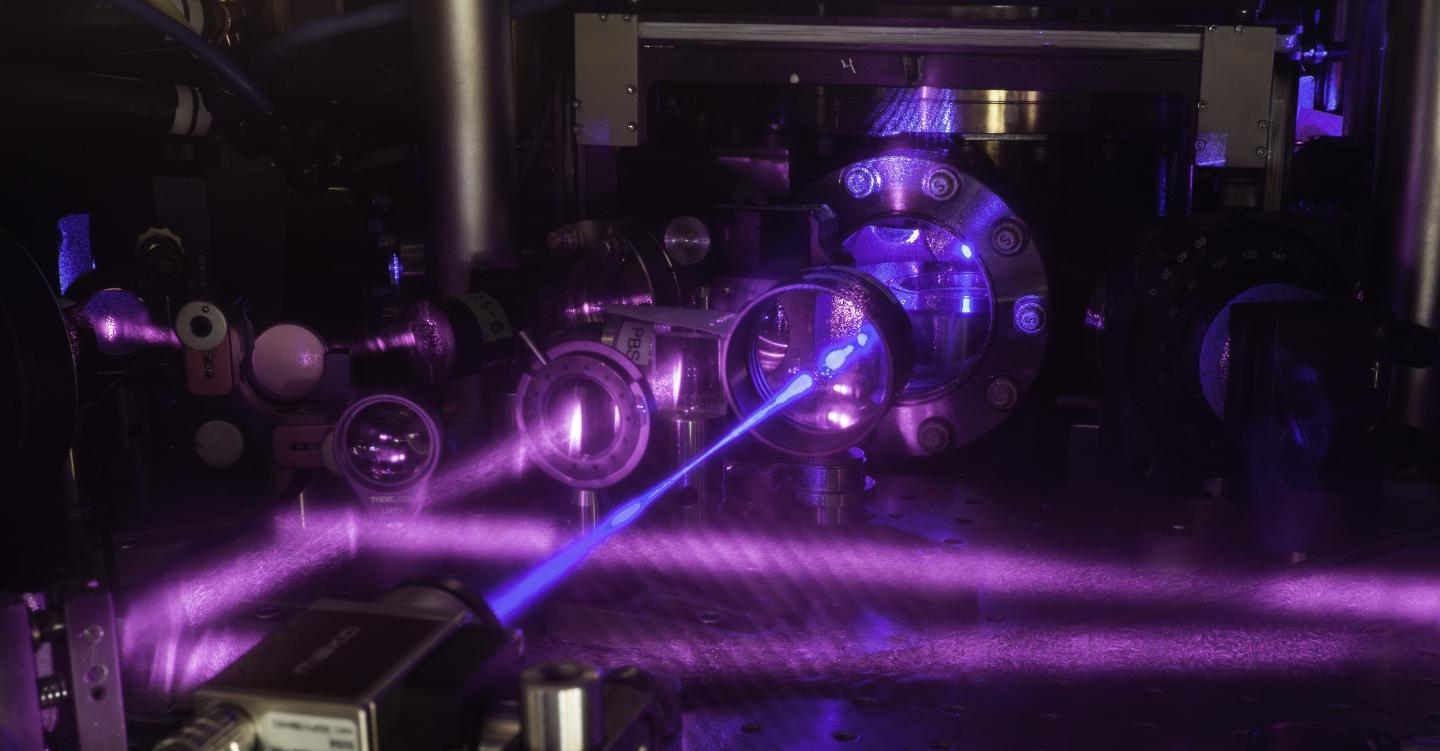 JILA’s three-dimensional (3-D) quantum gas atomic clock consists of a grid of light formed by three pairs of laser beams. Multiple lasers of various colors are used to cool the atoms, trap them in a grid of light, and probe them for clock operation. A blue laser beam excites a cube-shaped cloud of strontium atoms. Strontium atoms fluorescence strongly when excited with blue light, as seen in the upper right corner behind the vacuum window. Credit: G.E. Marti/JILA

JILA physicists have created an entirely new design for an atomic clock, in which strontium atoms are packed into a tiny three-dimensional (3-D) cube at 1,000 times the density of previous one-dimensional (1-D) clocks. In doing so, they are the first to harness the ultra-controlled behavior of a so-called “quantum gas” to make a practical measurement device.

With so many atoms completely immobilized in place, JILA’s cubic quantum gas clock sets a record for a value called “quality factor” and the resulting measurement precision. A large quality factor translates into a high level of synchronization between the atoms and the lasers used to probe them, and makes the clock’s “ticks” pure and stable for an unusually long time, thus achieving higher precision.

Until now, each of the thousands of “ticking” atoms in advanced clocks behave and are measured largely independently. In contrast, the new cubic quantum gas clock uses a globally interacting collection of atoms to constrain collisions and improve measurements. The new approach promises to usher in an era of dramatically improved measurements and technologies across many areas based on controlled quantum systems.

The new clock is described in the Oct. 6 issue of Science.

“We are entering a really exciting time when we can quantum engineer a state of matter for a particular measurement purpose,” said physicist Jun Ye of the National Institute of Standards and Technology (NIST). Ye works at JILA, which is jointly operated by NIST and the University of Colorado Boulder.

The clock’s centerpiece is an unusual state of matter called a degenerate Fermi gas (a quantum gas for Fermi particles), first created in 1999 by Ye’s late colleague Deborah Jin. All prior atomic clocks have used thermal gases. The use of a quantum gas enables all of the atoms’ properties to be quantized, or restricted to specific values, for the first time.

“The most important potential of the 3-D quantum gas clock is the ability to scale up the atom numbers, which will lead to a huge gain in stability,” Ye said. “Also, we could reach the ideal condition of running the clock with its full coherence time, which refers to how long a series of ticks can remain stable. The ability to scale up both the atom number and coherence time will make this new-generation clock qualitatively different from the previous generation.”

Until now, atomic clocks have treated each atom as a separate quantum particle, and interactions among the atoms posed measurement problems. But an engineered and controlled collection, a “quantum many-body system,” arranges all its atoms in a particular pattern, or correlation, to create the lowest overall energy state. The atoms then avoid each other, regardless of how many atoms are added to the clock. The gas of atoms effectively turns itself into an insulator, which blocks interactions between constituents.

The result is an atomic clock that can outperform all predecessors. For example, stability can be thought of as how precisely the duration of each tick matches every other tick, which is directly linked to the clock’s measurement precision. Compared with Ye’s previous 1-D clocks, the new 3-D quantum gas clock can reach the same level of precision more than 20 times faster due to the large number of atoms and longer coherence times.

The experimental data show the 3-D quantum gas clock achieved a precision of just 3.5 parts error in 10 quintillion (1 followed by 19 zeros) in about 2 hours, making it the first atomic clock to ever reach that threshold (19 zeros). “This represents a significant improvement over any previous demonstrations,” Ye said.

The older, 1-D version of the JILA clock was, until now, the world’s most precise clock. This clock holds strontium atoms in a linear array of pancake-shaped traps formed by laser beams, called an optical lattice. The new 3-D quantum gas clock uses additional lasers to trap atoms along three axes so that the atoms are held in a cubic arrangement. This clock can maintain stable ticks for nearly 10 seconds with 10,000 strontium atoms trapped at a density above 10 trillion atoms per cubic centimeter. In the future, the clock may be able to probe millions of atoms for more than 100 seconds at a time.

Optical lattice clocks, despite their high levels of performance in 1-D, have to deal with a tradeoff. Clock stability could be improved further by increasing the number of atoms, but a higher density of atoms also encourages collisions, shifting the frequencies at which the atoms tick and reducing clock accuracy. Coherence times are also limited by collisions. This is where the benefits of the many-body correlation can help.

The 3-D lattice design–imagine a large egg carton–eliminates that tradeoff by holding the atoms in place. The atoms are fermions, a class of particles that cannot be in the same quantum state and location at once. For a Fermi quantum gas under this clock’s operating conditions, quantum mechanics favors a configuration where each individual lattice site is occupied by only one atom, which prevents the frequency shifts induced by atomic interactions in the 1-D version of the clock.

JILA researchers used an ultra-stable laser to achieve a record level of synchronization between the atoms and lasers, reaching a record-high quality factor of 5.2 quadrillion (5.2 followed by 15 zeros). Quality factor refers to how long an oscillation or waveform can persist without dissipating. The researchers found that atom collisions were reduced such that their contribution to frequency shifts in the clock was much less than in previous experiments.

“This new strontium clock using a quantum gas is an early and astounding success in the practical application of the ‘new quantum revolution,’ sometimes called ‘quantum 2.0’,” said Thomas O’Brian, chief of the NIST Quantum Physics Division and Ye’s supervisor. “This approach holds enormous promise for NIST and JILA to harness quantum correlations for a broad range of measurements and new technologies, far beyond timing.”

Depending on measurement goals and applications, JILA researchers can optimize the clock’s parameters such as operational temperature (10 to 50 nanokelvins), atom number (10,000 to 100,000), and physical size of the cube (20 to 60 micrometers, or millionths of a meter).

Atomic clocks have long been advancing the frontier of measurement science, not only in timekeeping and navigation but also in definitions of other measurement units and other areas of research such as in tabletop searches for the missing “dark matter” in the universe.

The National Bureau of Standards, now NIST, invented the first atomic clock in 1948.