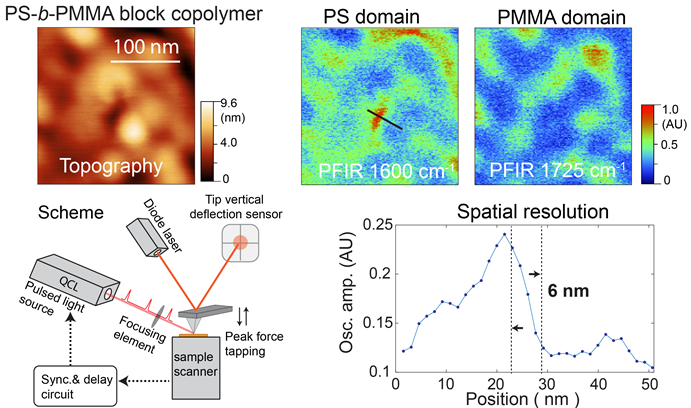 The lower portion of this image by Xiaoji Xu’s group shows the operational scheme of peak force infrared (PFIR) microscopy. The upper portion shows the topography of nanoscale PS-b-PMMA polymer islands on a gold substrate. (Image courtesy of Xiaoji Xu)

They may be tiny and invisible, says Xiaoji Xu, but the aerosol particles suspended in gases play a role in cloud formation and environmental pollution and can be detrimental to human health.

Aerosol particles, which are found in haze, dust and vehicle exhaust, measure in the microns. One micron is one-millionth of a meter; a thin human hair is about 30 microns thick.

The particles, says Xu, are among the many materials whose chemical and mechanical properties cannot be fully measured until scientists develop a better method of studying materials at the microscale as well as the much smaller nanoscale (1 nm is one-billionth of a meter).

Xu, an assistant professor of chemistry, has developed such a method and utilized it to perform noninvasive chemical imaging of a variety of materials, as well as mechanical mapping with a spatial resolution of 10 nanometers.

“Materials in nature are rarely homogeneous,” says Xu. “Functional polymer materials often consist of nanoscale domains that have specific tasks. Cellular membranes are embedded with proteins that are nanometers in size. Nanoscale defects of materials exist that affect their mechanical and chemical properties.

“PFIR microscopy represents a fundamental breakthrough that will enable multiple innovations in areas ranging from the study of aerosol particles to the investigation of heterogeneous and biological materials,” says Xu.

Xu and his group recently reported their results in an article titled “Nanoscale simultaneous chemical and mechanical imaging via peak force infrared microscopy.” The article was published in Science Advances, a journal of the American Association for the Advancement of Science, which also publishes Science magazine.

The article’s lead author is Le Wang, a Ph.D. student at Lehigh. Coauthors include Xu and Lehigh Ph.D. students Haomin Wang and Devon S. Jakob, as well as Martin Wagner of Bruker Nano in Santa Barbara, Calif., and Yong Yan of the New Jersey Institute of Technology.

“PFIR microscopy enables reliable chemical imaging, the collection of broadband spectra, and simultaneous mechanical mapping in one simple setup with a spatial resolution of ~10 nm,” the group wrote.

“We have investigated three types of representative materials, namely, soft polymers, perovskite crystals and boron nitride nanotubes, all of which provide a strong PFIR resonance for unambiguous nanochemical identification. Many other materials should be suited as well for the multimodal characterization that PFIR microscopy has to offer.

“In summary, PFIR microscopy will provide a powerful analytical tool for explorations at the nanoscale across wide disciplines.”

Xu and Le Wang also published a recent article about the use of PFIR to study aerosols. Titled “Nanoscale spectroscopic and mechanical characterization of individual aerosol particles using peak force infrared microscopy,” the article appeared in an “Emerging Investigators” issue of Chemical Communications, a journal of the Royal Society of Chemistry. Xu was featured as one of the emerging investigators in the issue. The article was coauthored with researchers from the University of Macau and the City University of Hong Kong, both in China.

PFIR simultaneously obtains chemical and mechanical information, says Xu. It enables researchers to analyze a material at various places, and to determine its chemical compositions and mechanical properties at each of these places, at the nanoscale.

“A material is not often homogeneous,” says Xu. “Its mechanical properties can vary from one region to another. Biological systems such as cell walls are inhomogeneous, and so are materials with defects. The features of a cell wall measure about 100 nanometers in size, placing them well within range of PFIR and its capabilities.”

PFIR has several advantages over scanning near-field optical microscopy (SNOM), the current method of measuring material properties, says Xu. First, PFIR obtains a fuller infrared spectrum and a sharper image—6-nm spatial resolution—of a wider variety of materials than does SNOM. SNOM works well with inorganic materials, but does not obtain as strong an infrared signal as the Lehigh technique does from softer materials such as polymers or biological materials.

“Our technique is more robust,” says Xu. “It works better with soft materials, chemical as well as biological.”

The second advantage of PFIR is that it can perform what Xu calls point spectroscopy.

“If there is something of interest chemically on a surface,” Xu says, “I put an AFM [atomic force microscopy] probe to that location to measure the peak-force infrared response.

A third advantage, says Xu, is that PFIR obtains a mechanical as well as a chemical response from a material.

“Our method simultaneously obtains chemical and mechanical information. It will be useful for analyzing a material at various places and determining its compositions and mechanical properties at each of these places, at the nanoscale.”

A fourth advantage of PFIR is its size, says Xu.

“We use a table-top laser to get infrared spectra. Ours is a very compact light source, as opposed to the much larger sizes of competing light sources. Our laser is responsible for gathering information concerning chemical composition. We get mechanical information from the AFM. We integrate the two types of measurements into one device to simultaneously obtain two channels of information.”

Although PFIR does not work with liquid samples, says Xu, it can measure the properties of dried biological samples, including cell walls and protein aggregates, achieving a 10-nm spatial resolution without staining or genetic modification.

Xu’s work has been supported by start-up funding from Lehigh, a Lehigh Faculty Research Grant, and in-kind equipment support from Bruker Nano.