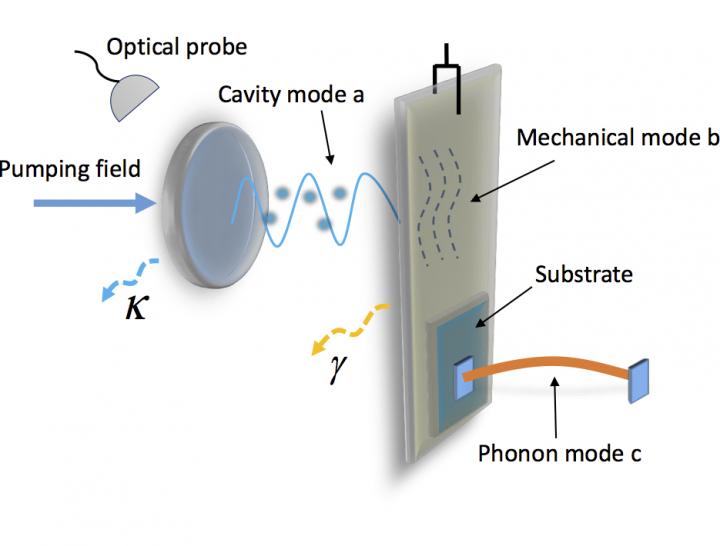 This is the scheme of the quantum non-demolition phonon counter. Credit: ©Science China Press

The precision measurement of photons, the smallest energy quanta of mechanics, has always been the main constraint to the development of quantum applications, such as quantum computation and quantum communication. A recent study has shown that a well-designed optomechanical device (see figure) can non-destructively detect phonon signals of a wide range of frequencies and in single-quantum level.

The paper titled: “Quantum non-demolition phonon counter with a hybrid optomechnical system”, written by professor Zhang Keye from the East China Normal University and researcher Dong Ying from the University of Waterloo in Canada, is published recently in SCIENCE CHINA Physics, Mechanics & Astronomy 61(5), 050311(2018).

In the paper the researchers put forward a new design of measurement device of phonons (see fig1). Different from the optical photons, which have a lot of methods of quantum measurement developed in the extensive researches of quantum optics, the phonons are difficult to detect precisely because their frequency domain is full of various low-frequency noises and the thermal noise of materials.

In addition, in the quantum region, the quantum measurement back-action is no longer negligible, leading to a destructive effect on the quantum states of phonons to be detected. So far, the methods of high-precision quantum metrology of phonons are mostly based on the photon-phonon scattering effect, which has a big limit on the frequency domain of the phonons.

Their new method, utilize the polaritons, the quasiparticles of the optomechanical system as a bridge, effectively performing the non-destructive quantum measurement method of photons on the phonons. In addition, they also break through the frequency constraint by parametric phonon coupling, greatly broadening the effective phonon frequency range of this method.

This result is of great significance for quantum computing, quantum communication and other quantum technologies based on solid quantum devices.