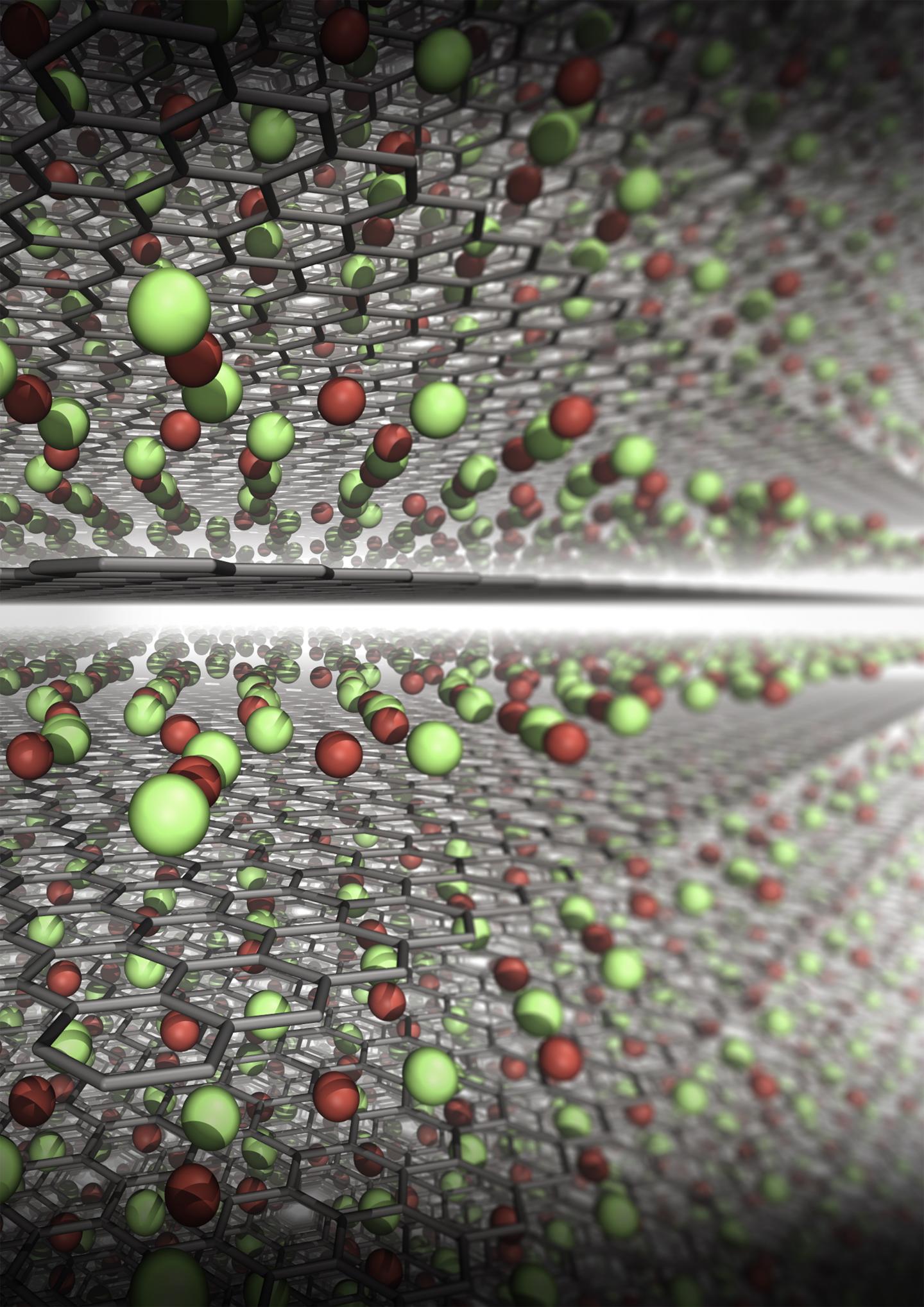 An illustration shows a molecular structure of the fully charged cathode developed in this work. Credit: (U.S. Army illustration)

Soldiers carrying 15-25 pounds of batteries could carry batteries a fraction of the weight but with the same energy and improved safety, a new study shows.

In the latest issue of the journal Nature, researchers at the U.S. Army Combat Capabilities Development Command’s Army Research Laboratory, the Army’s corporate research laboratory known as ARL, and the University of Maryland demonstrated a transformative step in battery technology with the identification of a new cathode chemistry.

Completely free of transition metal and delivering unprecedented high capacity by reversibly storing Li-ion at high potential (~4.2 V), the finding opens a possibility to significantly increase the lithium-ion battery energy density while preserving safety due to the aqueous nature of the electrolyte, said Dr. Kang Xu, an ARL fellow and senior research chemist.

“Such a high energy, safe and potentially flexible new battery will likely give the Soldiers what they need on the battlefield: reliable high energy source with robust tolerance against abuse,” he said. “It is expected to significantly enhance the mobility and lethality of the Soldier while unburdening logistics requirements.”

Building on their previous discoveries of the intrinsically safe “water-in-salt electrolytes (WiSE)” and the technique to stabilize graphite anodes in WiSE, the team’s development of the novel cathode chemistry further extends available energy for aqueous batteries to a previously unachievable level.

Leveraging the reversible halogen conversion and intercalation in a graphite structure enabled by a super-concentrated aqueous electrolyte, the authors demonstrated the full aqueous Li-ion batteries with excellent cycling stability and a projected energy density of 460 Wh/Kg (total mass of cathode and anode), which is comparable or even higher than state-of-the-art Li-ion batteries using transition metal oxide cathodes and flammable non-aqueous electrolytes.

The researchers, led by Chunsheng Wang, R.F. and F.R. Wright Distinguished Chair Professor in UMD’s Department of Chemical & Biomolecular Engineering and Department of Chemistry and Biochemistry; Kang Xu, ARL Fellow, and Oleg Borodin, ARL scientist, developed the battery into a testable stage with button cell configuration that is typically used as a test vehicle in research labs, and characterized in details the conversion – intercalation chemistry that is responsible for the increased energy density. More research is needed to scale it up into a practical large-scale battery, Kang said.

“This new cathode chemistry happens to be operating ideally in our previously-developed ‘water-in-salt’ aqueous electrolyte in Science in 2015, which makes it even more unique – it combines both high energy density of non-aqueous systems and high safety of aqueous systems,” said the first author of the paper, Chongyin Yang, an assistant research scientist in the Department of Chemical and Biomolecular Engineering at College Park.

“The energy output of water-based battery reported in this work is comparable to ones based on flammable organic liquids other than water, but is much safer.” Wang Said. “It gets about 25% extra the energy density of an ordinary cell phone battery. The new cathode is able to hold, per gram, 240 milliamps for an hour of operation, whereas the kind widely used cathode in cell phones, laptops, and tools (LiCoO2), provides only 120-140 milliamps each hour per gram.”

Beyond portable batteries for Soldiers, this aqueous battery chemistry could also be used in applications that involve large energies at kilowatt or megawatt levels or where battery safety and toxicity are primary concerns, including non-flammable batteries for airplanes, naval vessels, or spaceships, or in civilian applications for portable electronics, electric vehicles and large-scale grid storage.

“The paper by the University of Maryland and the Army team is the most creative new battery chemistry I have seen in at least 10 years,” said Professor Jeff Dahn, of Dalhousie University in Canada. Dahn is a leader in battery technology and one of the inventors of the lithium ion battery. “The fact that the LiCl and LiBr reversibly convert and form halogen intercalated graphite is truly incredible. The team has demonstrated encouraging reversibility for 150 cycles and have shown that high energy densities should be attainable in 4-volt cells that contain no transition metals and no non-aqueous solvents. It remains to be seen if a practical long-lived commercial cell can be developed, but I am very excited by this research.”

Prof. Gleb Yushin of Georgia Tech and CTO of SILA nanotechnology, who was not involved in the study, noted that “In their paper C. Wang et al. demonstrated an absolutely remarkable progress in their development of nonflammable aqueous Li-ion batteries by simultaneously increasing cell voltage and utilizing cobalt-free and nickel-free cathodes. In contrast to traditional intercalation cathodes based on rare, expensive and rather toxic transition metals, such as cobalt and nickel, researchers demonstrated excellent cycle stability in a graphite-salt composite cathode coupled with a pure graphite anode. Their innovative solution enables the use of cheaper and environmentally safer graphite as a higher gravimetric capacity cathode that operates at a higher average voltage than state of the art. In yet another contrast to traditional Li-ion where Li ions do all the work, the new cells utilize both Li cations and halogen anions for charge storage. Overall, this work reports on multiple key milestones for aqueous ion batteries and provides a major leap towards their commercially viable use in stationary storage and possibly even electric transportation applications.”

“This work is mainly about a brand-new concept of Li-ion cathode chemistry – using the redox reactions of halogens (Br and Cl in this case) to store charges, and using their intercalation nature to stabilize their strong oxidizing products inside the interlayer of graphite, forming dense-packed graphite intercalation compounds,” said Yang, a scientist at Argonne’s Advanced Photon Source . “This new ‘Conversion-Intercalation’ chemistry inherits the high energy of conversion-reaction and the excellent reversibility from topotactic intercalation.”