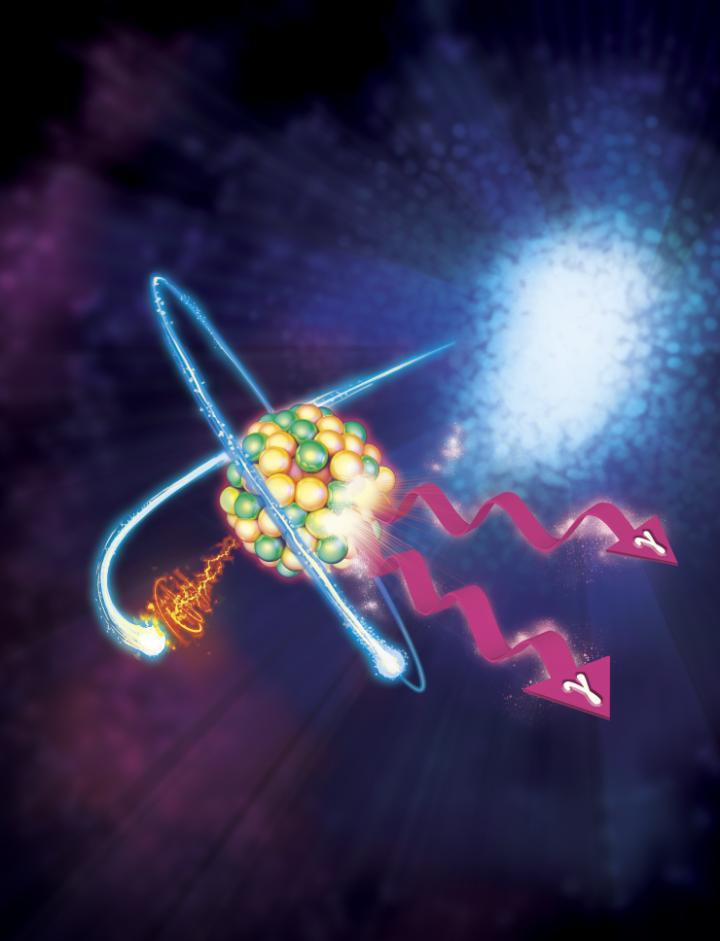 The cover image is an artistic impression of the process of nuclear excitation by electron capture. A highly stripped ion, illustrated here as an atomic nucleus with a single orbiting electron, captures an incident electron into a vacant orbit. Under the right conditions, this capture transfers a small amount of energy into the nucleus, which subsequently emits a much larger amount of energy in the form of gamma rays. Image courtesy of ARL’s James J. Carroll, William Parks and Eric Proctor

A multinational research team led by Army scientists successfully induced a controlled release of stored isotopic energy using a physical effect involving atomic electrons that was proposed more than 40 years ago but never before demonstrated experimentally.

Scientists said this significant scientific achievement marks a step in the Army’s quest to find and access alternative energy sources far beyond those possible with chemicals for new types of batteries.

This result is reported as a Letter in the February 8 issue of the journal Nature.

“Efforts are underway to develop new tools for the Army of the future, whether in enhancing the ability to understand the battlespace, better protecting the Soldier, or moving more quickly and efficiently,” said Dr. James Carroll, a team leader in the U.S. Army Research Laboratory’s Power Components Branch. “However, without sufficient energy and power, none of these improvements are feasible. Thus, there is clearly a strong motivation to expand the Army’s access to energy and new power sources. For example, this drives research into improved chemical batteries with Army-specific capabilities to lighten the burden for Soldiers; however, research is also underway to determine the feasibility of accessing energy stored by isotopes at 100,000 times the density that chemicals can provide. One can say we are trying to push beyond a ‘chemical limit’ for entirely new types of batteries.”

Carroll and the ARL team are hoping to accomplish this by exploring a non-chemical class of materials, namely radioisotopes that store energy in non-fissionable materials. In this new result, they demonstrated in a test of a specific isotope of molybdenum that energy could be stored in an excited form of those nuclei that lasts for about seven hours, and that energy could be released on a much shorter time scale by a new process involving the atomic shells around that nucleus. Creating a “hole” in an atomic shell, a free electron falling into that shell transferred just the right (small) amount of energy to the nuclei and, like a switch, caused a controlled release of the greater stored energy. The fascinating science behind this process was what attracted other researchers from the U.S., Europe, and Australia to join in this experiment.

The emphasis of the team at ARL focuses on learning more about basic energy-release mechanisms that may, in the deep future, support new types of power sources. It was as part of this effort that the electron-nuclear mechanism was demonstrated for the first time, an example of how the ARL focus dovetails with pure scientific research.

In the near term, the main impact is fundamental in providing the first evidence for this effect that can be used to evaluate theoretical models to understand the process, and new experiments are being prepared to characterize the process further. In the long term, the researchers hope that this mechanism may provide a practical means of providing a new type of batteries and power sources for Army needs.