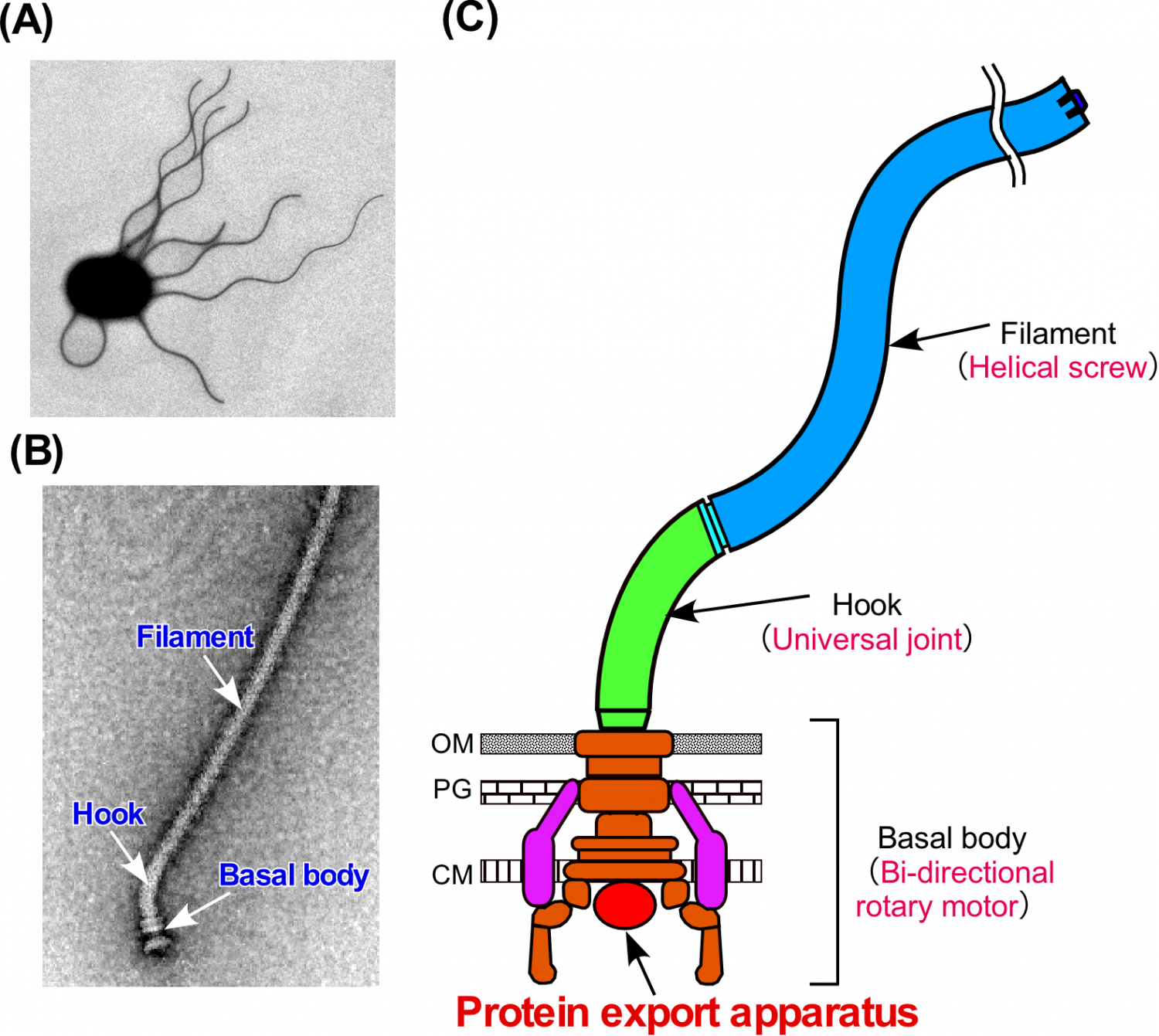 Osaka University researchers use X-ray crystallography and electron microscopy to resolve the assembly of the export gate apparatus in Salmonella. The new details of this nanomachine are expected to clarify how bacteria infect eukaryotic cells and present new molecular targets for drug discovery.

One of the oldest nanomachines in biology is the bacterial flagellum. This apparatus is evolutionary essential, endowing onto bacteria the ability to move. The flagellum shares high similarity with another bacterial structure, the injectisome, which as the name implies is how some bacteria deliver their content to infect a host. A new study by researchers at Osaka University reveals how a specific structure in flagellum and injectisome, the export gate complex, dynamically assembles and how preventing this assembly could make bacteria innocuous. The study can be seen in PLOS Biology.

Associate Professor Tohru Minamino at the Graduate School of Frontier Biosciences has been studying the export gate complex for many years using electron microscopy. His interest in this complex is mainly in engineering new nanomachines, but he has realized the same research could have medical implications.

“There are many structural and functional similarities between the flagellar and injectisome proteins. They could make good targets for inhibiting bacterial infection,” he said.

Figure 2. Model for the FliP ring structure. FliP forms a homo-hexamer. The FliO complex acts as a scaffold to bind to FliP to facilitate FliP ring formation. (Credit: Osaka University)

The export complex in Salmonella flagellum consists of five transmembrane proteins. These will assemble sequentially to form the export gate, beginning with the protein FliP. The export gate in Salmonella injectisome is believed to assemble similarly using five homologous proteins. Minamino shows that even though it is not a part of the gate structure, a sixth transmembrane protein, FliO, is essential to commence the gate assembly.

“FliO acts as a scaffold for FliP to form a ring structure. Without this ring, the other transmembrane proteins will not follow into the gate complex,” he said.

Electron microscopy images indicated that the FliO scaffold causes FliP to form a hexamer, which allows subsequent transmembrane proteins to join the assembly. Electrostatic calculations identified which specific amino acids in FliP were critical for the FliO-FliP interactions and the FliP-FliP interactions, providing candidate targets for experimental drugs. To demonstrate that FliO is necessary for the export gate assembly and not the structure, Minamino showed that the over-expression of FliP can bypass the FliO defect and proceed to complete the export gate apparatus.

Although FliO enables FliP to form a hexamer, the FliP homologous protein in the injectisome, SpaP, forms a pentemer and a hetero-hexamer along with SpaR, the FliR homologous protein. Computational analysis suggested FliP could also take this structure.

Figure 3. Model for the assembly process of the flagellar export apparatus. The assembly of the export gate complex begins with FliP ring formation with the help of the FliO complex, followed by the assembly of FliQ, FliR, and FlhB and finally of FlhA during MS ring formation in the cytoplasmic membrane. Upon completion of the C ring structure, the cytoplasmic ATPase ring complex is formed at the flagellar base, allowing export substrates to go into the central cavity of the FliP ring complex. (Credit: Osaka University)

“A significant number of the FliP ring particles we analyzed could be assigned to 5-fold rotational analysis, so they could form pentamers. We are confident FliP is a good model for SpaP,” said Minamino.

Identification of the first step for export gate assembly, namely the oligmerization of FliP through FliO interactions, suggests a potential way to disrupt the pathology of bacteria like Salmonella.