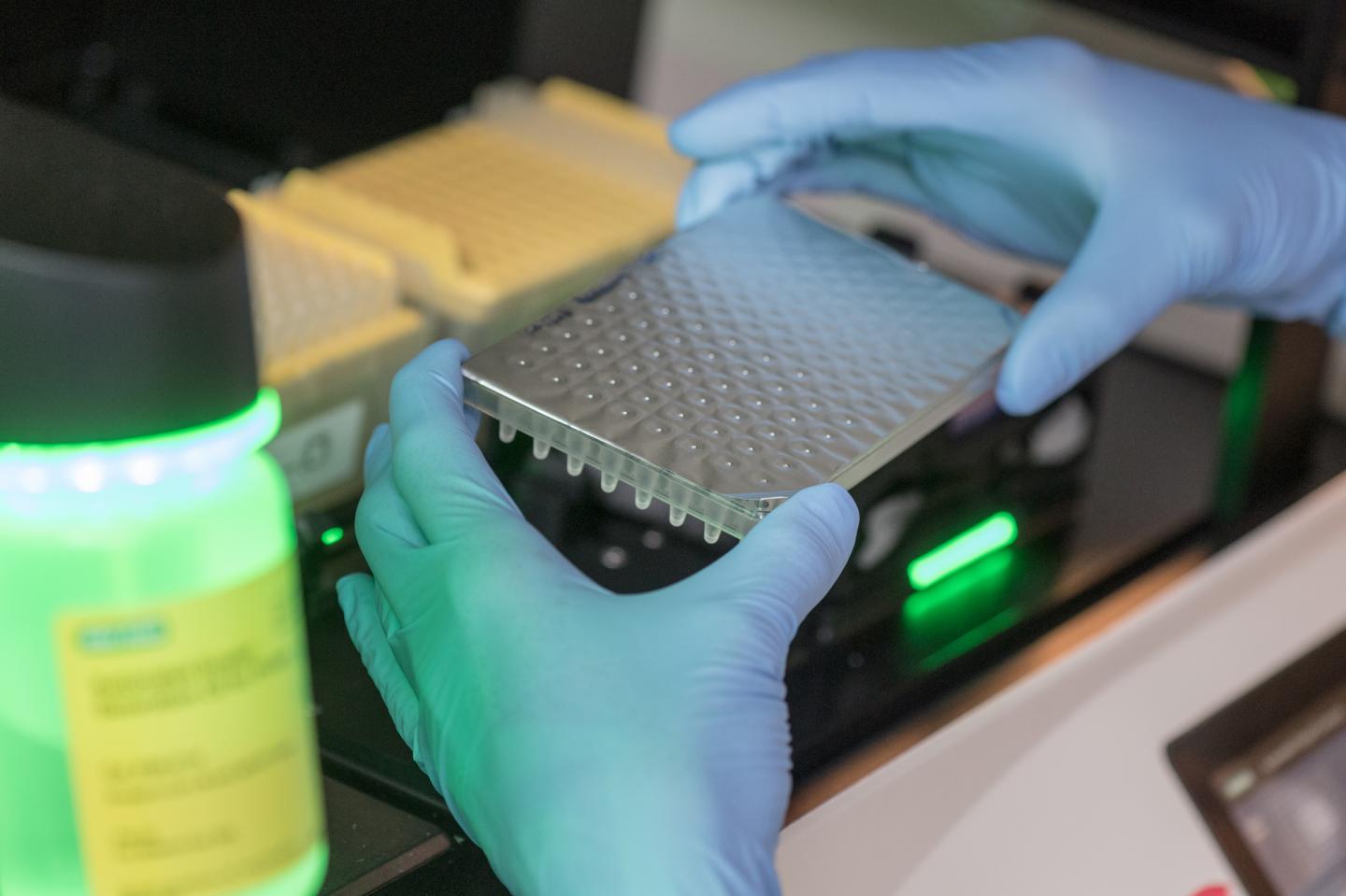 The test detects RNA molecules via via Droplet Digital PCR. Therefore the samples are pipetted in 96-well PCR-racks (shown on the picture). Source: Andreas Heddergott / TUM

When bacteria develop antibiotic resistance, treatment with these medications becomes ineffective. Similarly, tumor cells can also change in such a way that renders them resistant to particular medications. This makes it vitally important for cancer patients and their doctors to determine as early as possible whether a specific therapy is working or not. A new blood test developed by researchers at the Technical University of Munich (TUM) can predict drug resistance in patients with advanced prostate cancer.

Prostate cancer tumor cells require the androgen hormone, testosterone, to grow. They possess a receptor to which testosterone binds and then signals the cancer cells to divide and grow. If a prostate tumor has already grown to a large size and started spreading throughout the body, therapeutic drugs are used to block growth where it starts – either by targeting tumor cell receptors to prevent testosterone from binding, or they entirely block the body’s overall production of testosterone. Two of the drugs most frequently used in this type of therapy are abiraterone and enzalutamide.

The hunt for resistant tumor cells

During the course of treatment, however, some tumor cells develop resistance to these drugs, and continue to grow and metastasize. The culprit: the tumor’s testosterone receptors have changed their structure, and the new variant can signal cancer cells to continue dividing and spreading – even without testosterone. The most common receptor variant seen in patients is called AR-V7. “If we know in advance whether or not a tumor has developed cells with this receptor, we can provide advice on an individual basis at an early stage – this can spare seriously-ill patients from undergoing an ineffective therapy,” explains Assistant Professor Dr. Matthias Heck, co-leader of the study and a specialist for Urology at the University Hospital TUM Klinikum rechts der Isar in Munich.

Heck and his team collaborated with colleagues led by Dr. Dr. Christof Winter, a physician and bioinformatician and the head of the “Liquid Profiling and Bioinformatics” lab at the TUM Institute of Clinical Chemistry and Pathobiochemistry to develop a new blood test. Until now, blood tests used to detect prostate tumor cells have looked for specific surface structures on the cells. It’s not only a time-consuming and expensive process because of the special equipment required for the tests, but it’s also not always efficacious. If the cells being tested lack the specific structure being searched for, these tests fail to detect their presence. The new test developed by TUM researchers utilizes a completely different method for looking at different markers in order to reliably, quickly and inexpensively measure the presence of the modified receptor AR-V7 at an early stage. Moreover, it can also determine whether or not the tumor is resistant to treatment with abiraterone and enzalutamide.

The new blood test provides an alternative to and has the potential to improve existing testing methods: It analyzes the amount of AR-V7 RNA molecules in the blood. In each and every one of the cells in our body, RNA is responsible for the translation of genetic information into protein molecules, including receptor molecules. If the test detects high levels of AR-V7 RNA in the blood, it’s evidence that the patient has already developed tumor cells resistant to therapy with abiraterone and enzalutamide. Dr. Silvia Thöne, co-lead author of the study, emphasizes the high sensitivity and accuracy of the new testing method: “Only minute amounts of RNA are needed in a sample for the test to work. Additionally, since AR-V7 RNA is present in every tumor cell that possesses the resistant receptors, it means that no tumor cells are slipping by undetected.”

For the study, TUM researchers analyzed blood samples from 85 patients with advanced stages of prostate cancer. They were able to successfully demonstrate that approximately one fifth of the patients had large amounts of AR-V7 RNA in their blood – an indication of large quantities of resistant tumor cells. It was exactly these patients who failed to respond to therapy with abiraterone and enzalutamide. They also had poorer prognoses during the subsequent course of their illness: Their tumors returned more quickly and they had shorter survival times than other patients.

“We were able to demonstrate that we can accurately predict whether or not resistance against abiraterone or enzalutamide is present in a patient,” explains Winter. The next step for researchers will be to further improve upon the testing method and also compare its efficacy to that of existing testing methods using a larger sample of patients. The goal? TUM researchers want to determine if their new blood test can someday be incorporated into the routine battery of clinical examinations for prostate cancer patients in the future.