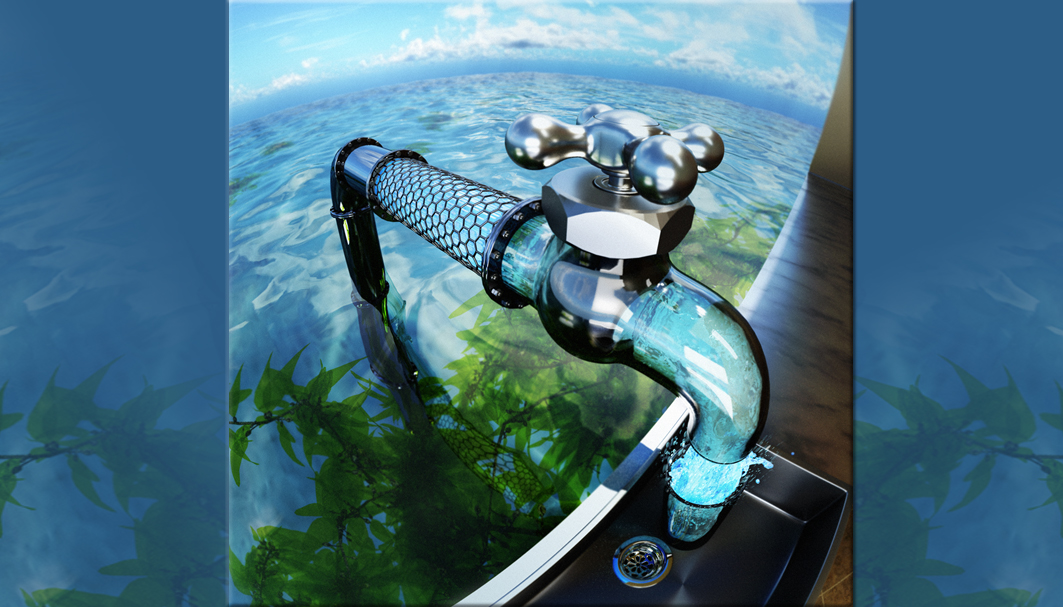 An artist’s depiction of the promise of carbon nanotube porins for desalination. The image depicts a stylized carbon nanotube pipe that delivers clean desalinated water from the ocean to a kitchen tap. Image by Ryan Chen/LLNL

Lawrence Livermore (LLNL) scientists, in collaboration with researchers at Northeastern University(link is external), have developed carbon nanotube pores that can exclude salt from seawater. The team also found that water permeability in carbon nanotubes (CNTs) with diameters smaller than a nanometer (0.8 nm) exceeds that of wider carbon nanotubes by an order of magnitude.

The nanotubes, hollow structures made of carbon atoms in a unique arrangement, are more than 50,000 times thinner than a human hair. The super smooth inner surface of the nanotube is responsible for their remarkably high water permeability, while the tiny pore size blocks larger salt ions.

“We found that carbon nanotubes with diameters smaller than a nanometer bear a key structural feature that enables enhanced transport. The narrow hydrophobic channel forces water to translocate in a single-file arrangement, a phenomenon similar to that found in the most efficient biological water transporters,” said Ramya Tunuguntla, an LLNL postdoctoral researcher and co-author of the paper, appearing in the Aug. 24 edition of Science.

Computer simulations and experimental studies of water transport through CNTs with diameters larger than 1 nm showed enhanced water flow, but did not match the transport efficiency of biological proteins and did not separate salt efficiently, especially at higher salinities. The key breakthrough achieved by the LLNL team was to use smaller-diameter nanotubes that delivered the required boost in performance.

“These studies revealed the details of the water transport mechanism and showed that rational manipulation of these parameters can enhance pore efficiency,” said Meni Wanunu, a physics professor at Northeastern University and co-author on the study.

“Carbon nanotubes are a unique platform for studying molecular transport and nanofluidics,” said Alex Noy, LLNL principal investigator on the CNT project and a senior author on the paper. “Their sub-nanometer size, atomically smooth surfaces and similarity to cellular water transport channels make them exceptionally suited for this purpose, and it is very exciting to make a synthetic water channel that performs better than nature’s own.”