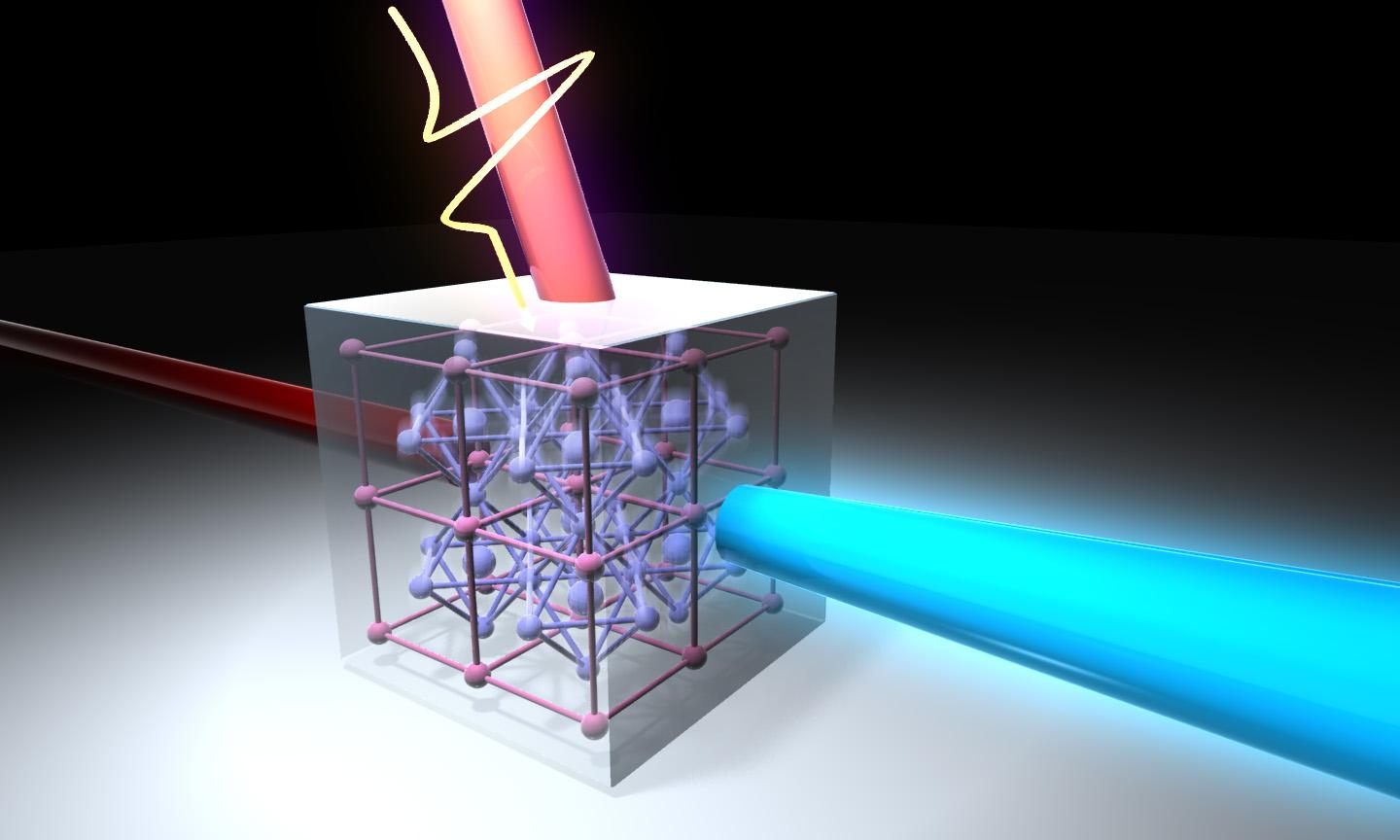 SHG allows for conversion of incident red light into blue light. Irradiation with a terahertz laser pulse can significantly enhance the SHG effect in BiCoO3.

How can the color of laser light be changed? One popular method to achieve this is the so-called second harmonic generation (SHG) effect, which doubles the frequency of light and hence changes its color. However, observing this nonlinear effect requires a polar crystal in which inversion symmetry is broken. For this reason, identifying crystals that can elicit strong SHG has been an important research topic, so that their properties can be exploited for applications in materials science.

Observation of nonlinear optical phenomena like SHG requires a finite second-order electric susceptibility, which occurs within any polar structure without inversion symmetry, and strong laser light or pulses. In the perovskite-type cobalt oxide BiCoO3 used in this work, an apical oxygen shift along the c-axis and a Co-O5 pyramid are present in the unit cell, resulting in symmetry breaking and a large spontaneous polarization at room temperature. For the laser pulse, the strong electromagnetic wave with an electric field up to ~1 MV/cm in the THz energy region was developed by Hideki Hirori and his team at iCeMS and was used to achieve ultrafast control of BiCoO3’s nonlinear behavior.

Yoichi Okimoto at Tokyo Institute of Technology and colleagues were specifically interested in understanding how the intensity of SHG from the BiCoO3 crystal changes when irradiated with a THz (i.e., far-infrared) laser pulse at room temperature. Notably, an unprecedented enhancement of SHG by more than 50 % was observed, indicating that employing THz laser light in this fashion can significantly improve the figure of merit of nonlinear crystals. In addition, this effect occurs on the 100 femtosecond (10-13 s) time scale, suggesting possible application to ultrafast optoelectronic devices.

Mechanistically, the ultrafast enhancement of the second harmonic signal can be understood in terms of d-d transitions from occupied to unoccupied states that exist around the wide energy band of the applied THz pulse. The photoexcited electrons elongate the apical oxygen atoms of the Co-O5 pyramids in the crystal structure via electron-phonon coupling, thereby augmenting its polar structure (and hence second-order electric susceptibility).

Future investigations of the photoexcited state of BiCoO3 and other polar oxide materials will consider higher-order nonlinear optical responses as well as ultrafast structural measurements using the THz pulse to elucidate additional mechanistic details of these fascinating materials.