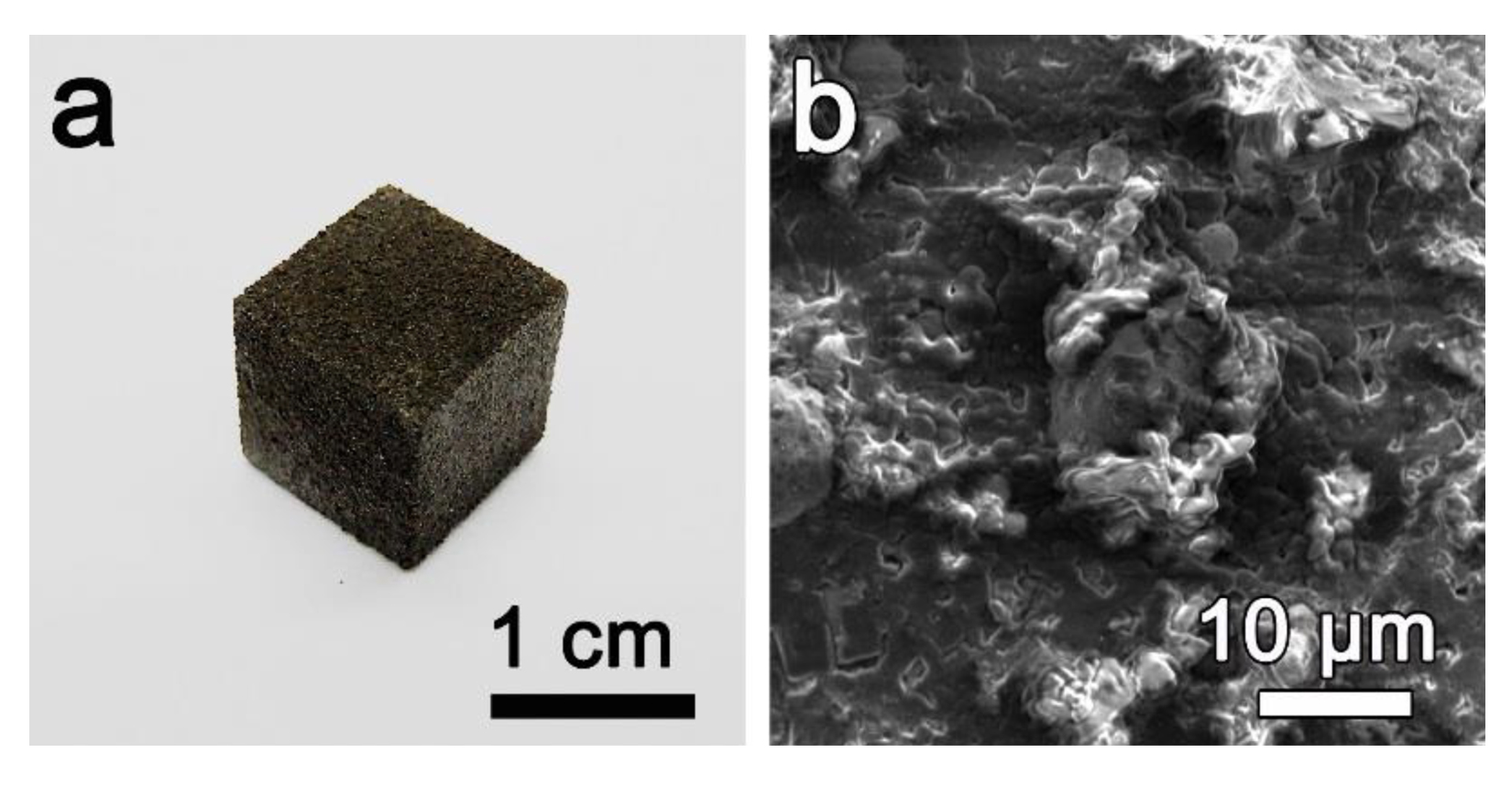 Laser sintering was used to 3-D print objects made of graphene foam, a 3-D version of atomically thin graphene. At left is a photo of a fingertip-sized cube of graphene foam; at right is a close-up of the material as seen with a scanning electron microscope. (Image courtesy of Tour Group/Rice University)

The research could yield industrially useful quantities of bulk graphene and is described online in a new study in the American Chemical Society journal ACS Nano.

“This study is a first of its kind,” said Rice chemist James Tour, co-corresponding author of the paper. “We have shown how to make 3-D graphene foams from nongraphene starting materials, and the method lends itself to being scaled to graphene foams for additive manufacturing applications with pore-size control.”

Graphene, one of the most intensely studied nanomaterials of the decade, is a two-dimensional sheet of pure carbon that is both ultrastrong and conductive. Scientists hope to use graphene for everything from nanoelectronics and aircraft de-icers to batteries and bone implants. But most industrial applications would require bulk quantities of graphene in a three-dimensional form, and scientists have struggled to find simple ways of creating bulk 3-D graphene.

For example, researchers in Tour’s lab began using lasers, powdered sugar and nickel to make 3-D graphene foam in late 2016. Earlier this year they showed that they could reinforce the foam with carbon nanotubes, which produced a material they dubbed “rebar graphene” that could retain its shape while supporting 3,000 times its own weight. But making rebar graphene was no simple task. It required a pre-fabricated 3-D mold, a 1,000-degree Celsius chemical vapor deposition (CVD) process and nearly three hours of heating and cooling.

In the latest study, a team from Tour’s lab and the labs of Rice’s Jun Luo and Tianjin’s Naiqin Zhao adapted a common 3-D printing technique to make fingertip-size blocks of graphene foam. The process is conducted at room temperature. No molds are required and the starting materials are powdered sugar and nickel powder.

“This simple and efficient method does away with the need for both cold-press molds and high-temperature CVD treatment,” said co-lead author Junwei Sha, a former student in Tour’s lab who is now a postdoctoral researcher at Tianjin. “We should also be able to use this process to produce specific types of graphene foam like 3-D printed rebar graphene as well as both nitrogen- and sulfur-doped graphene foam by changing the precursor powders.”

Three-D laser printers work differently than the more familiar extrusion-based 3-D printers, which create objects by squeezing melted plastic through a needle as they trace out two-dimensional patterns. In 3-D laser sintering, a laser shines down onto a flat bed of powder. Wherever the laser touches powder, it melts or sinters the powder into a solid form. The laser is rastered, or moved back and forth, line by line to create a single two-dimensional slice of a larger object. Then a new layer of powder is laid over the top of that layer and the process is repeated to build up three-dimensional objects from successive two-dimensional layers.

The new Rice process used a commercially available CO2 laser. When this laser was shone onto the sugar and nickel powder, the sugar was melted and the nickel acted as a catalyst. Graphene formed as the mixture cooled after the laser had moved on to melt sugar in the next spot, and Sha and colleagues conducted an exhaustive study to find the optimal amount of time and laser power to maximize graphene production.

The foam created by the process is a low-density, 3-D form of graphene with large pores that account for more than 99 percent of its volume.