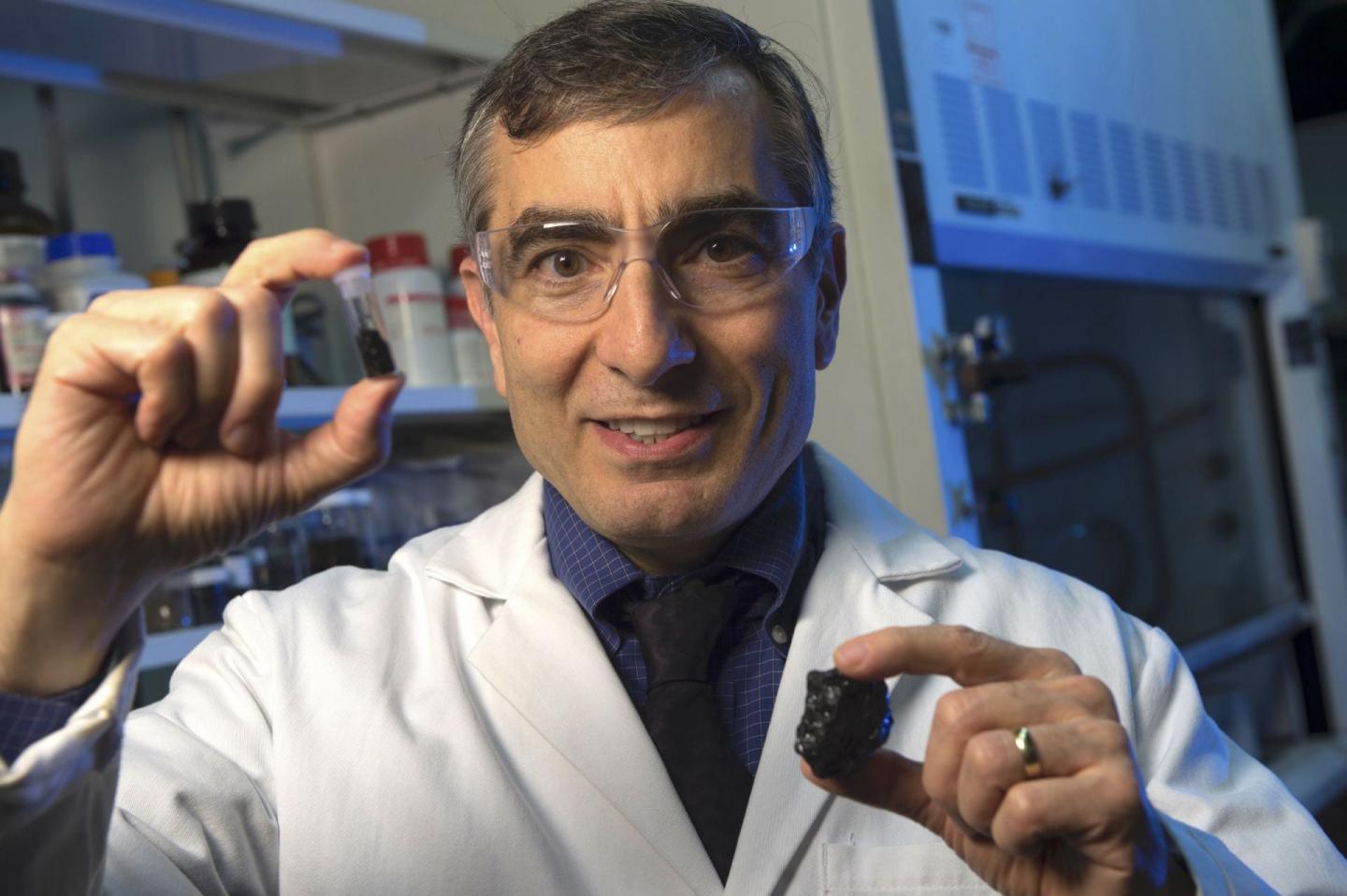 Rice University chemist James Tour holds coal and a vial of coal-derived graphene quantum dots. The dots have been modified for use as an effective antioxidant. Credit: Jeff Fitlow/Rice University

Graphene quantum dots drawn from common coal may be the basis for an effective antioxidant for people who suffer traumatic brain injuries, strokes or heart attacks.

Quantum dots are semiconducting materials small enough to exhibit quantum mechanical properties that only appear at the nanoscale.

Rice chemist James Tour, A&M neurologist Thomas Kent and UTHealth biochemist Ah-Lim Tsai and their teams found the biocompatible dots, when modified with a common polymer, are effective mimics of the body’s own superoxide dismutase, one of many natural enzymes that keep oxidative stress in check.

But because natural antioxidants can be overwhelmed by the rapid production of reactive oxygen species (ROS) that race to heal an injury, the team has been working for years to see if a quick injection of reactive nanomaterials can limit the collateral damage these free radicals can cause to healthy cells.

An earlier study by the trio showed that hydrophilic clusters modified with polyethylene glycol (PEG) to improve their solubility and biological stability are effective at quenching oxidative stress, as a single nanoparticle had the ability to neutralize thousands of ROS molecules.

“Replacing our earlier nanoparticles with coal-derived quantum dots makes it much simpler and less expensive to produce these potentially therapeutic materials,” Tour said. “It opens the door to more readily accessible therapies.”

Tests on cell lines showed a mix of PEG and graphene quantum dots from common coal is just as effective at halting damage from superoxide and hydrogen peroxides as the earlier materials, but the dots themselves are more disclike than the ribbonlike clusters.

The Tour lab first extracted quantum dots from coal in 2013 and reported on their potential for medical imaging, sensing, electronic and photovoltaic applications. A subsequent study showed how they can be engineered for specific semiconducting properties.

In the new study, the researchers evaluated the dots’ electrochemical, chemical and biological activity. The Rice lab chemically extracted quantum dots from inexpensive bituminous and anthracite coal, modified them with the polymer and tested their abilities on live cells from rodents.

The results showed that quantum dot doses in various concentrations were highly effective at protecting cells from oxidation, even if the doses were delayed by 15 minutes after the researchers added damaging hydrogen peroxide to the cell culture dishes.

The disclike, 3-5-nanometer bituminous quantum dots are smaller than the 10-20-nanometer anthracite dots. The researchers found the level of protection was dose-dependent for both types of particles, but that the larger anthracite-derived dots protected more cells at lower concentrations.

“Although they both work in cells, in vivo, the smaller ones are more effective,” Tour said. “The larger ones likely have trouble accessing the brain as well.”