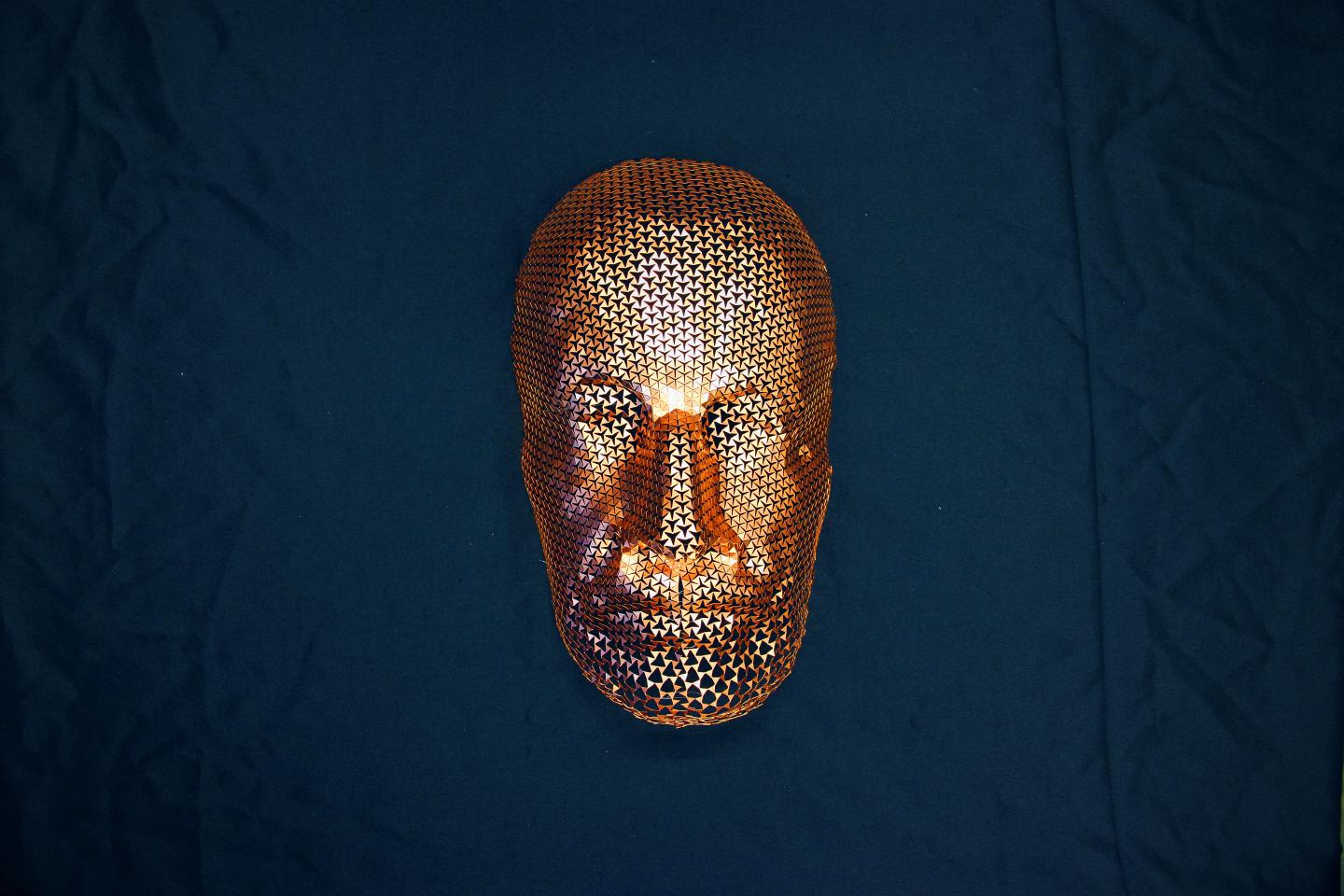 A computational design tool created a pattern of perforations that enabled a flat sheet of copper to form a 3-D mask. This tool could be used to explore the possiblities of materials that stretch uniformly. Source: David J. Srolovitz, fundamental.berlin

A new computational design tool can turn a flat sheet of plastic or metal into a complex 3-D shape, such as a mask, a sculpture or even a lady’s high-heel shoe.

Researchers at Carnegie Mellon University and the Swiss Federal Institute of Technology in Lausanne, Switzerland (EPFL), say the tool enables designers to fully and creatively exploit an unusual quality of certain materials — the ability to expand uniformly in two dimensions. A rubber band, by contrast, contracts in one dimension while being stretched in another.

“We’re taking a flat piece of material and giving it the tendency, or even the desire, to bend into a certain 3-D shape,” said Keenan Crane, assistant professor of computer science and robotics at Carnegie Mellon.

In this case, the researchers were making hexagonal cuts into flexible, but not normally stretchable plastic and metal sheets to give them the ability to expand uniformly, up to a point. But the design tool could be useful for a variety of synthetic materials, known as auxetic materials that share this same distinctive quality.

The ability to design complex objects from auxetic materials could have a wide variety of applications in biomechanics, consumer goods and architecture, said Mark Pauly, assistant professor of computer and communications sciences at EPFL.

The researchers will present their method July 27 at the International Conference on Computer Graphics and Interactive Techniques (SIGGRAPH) in Anaheim, Calif.

Origami-style folding techniques already have helped produce devices such as cardiac stents, which must be maneuvered into the narrowed artery of a heart patient and then expanded to hold the artery open, and solar arrays that unfold after being launched into space. Auxetic materials could be used in similar ways, while also exploiting their additional capabilities.

“Artists and designers have played around with these materials, but ultimately they have been limited by the things they could fashion by hand,” Crane said. “We wanted to see what you could do if you got computation involved.”

In particular, they worked with Mina Konakovi?, a Ph.D. student at EPFL, to use conformal geometry to map the surfaces of these auxetic materials. Just as auxetic sheets expand uniformly in two dimensions, conformal geometry studies maps between spaces where lengths uniformly shrink and expand. A key challenge in connecting the two is addressing the harsh, physical reality that real materials can only expand so much, she said.

Metal and plastic sheets, altered with cuts to lend them auxetic qualities, are convenient materials to explore how to create these complex designs, Crane said. In this study, a series of hexagonal slits were cut into the sheets to create triangular elements that were able to rotate relative to their neighbors, allowing them to expand uniformly.

Based on a 3-D digital model, the computational tool can determine the pattern of slits necessary to make the sheet conform to the desired shape. This pattern can then be transferred to a laser cutter to begin the fabrication process. The researchers used this process to make a woman’s high-heel shoe, a sculpture, a woman’s fashion top, a lampshade and face masks.

For now, determining just how to bend the laser-cut sheet to achieve the 3-D shape is a little tricky, Crane acknowledged. To form a mask, for instance, the perforated sheet was placed over a cast of the face and pressed into position. The ultimate solution, not addressed in this early study, would be to use materials that would automatically pop into position, he said.