A plastic film that is thinner than a human hair and can be bent thousands of times without disrupting its ability to detect light has been developed by RIKEN researchers (Advanced Materials, “Ultraflexible near-infrared organic photodetectors for conformal photoplethysmogram sensors”).

They demonstrated its potential for on-skin medical diagnostics by attaching it to the fingertips and using it as a highly sensitive sensor of blood flow.

Wearable medical devices must be comfortable for patients, but this can be difficult to achieve due to the brittleness of materials such as silicon typically used to construct sensors. Recent advances in polymer technology, however, have presented a solution in the form of soft sheets of conductive organic molecules that can flex to accommodate the mechanical movements of the body.

Takao Someya and Kenjiro Fujuda of the RIKEN Center for Emergent Matter Science and their colleagues have been developing polymer devices that also detect near-infrared light — a form of radiation that can safely penetrate and illuminate tissue a few millimeters beneath the skin.

But they have struggled to achieve high-speed signal reading with these devices, particularly when they are stretched. Poor conformation to skin and stress-induced reductions in electron speeds were pinpointed as possible causes.

To resolve these issues, the team aimed to radically decrease the typical, 100-micrometer-scale thickness of polymer near-infrared detectors.

To achieve this, they deposited a near-infrared sensitive “active layer” of aromatic polymers onto a substrate of the polymer parylene and then coated the device with the parylene to optimize the physical layout of its active layer. They also used a Teflon layer to make it easier to peel the film from the supporting glass.

“Building devices on extremely thin polymers requires structural engineering at the nanoscale to minimize energy-intensive processes, such as strain,” notes Sungjun Park, the first author of the study.

“Because we assembled the device components in a layer-by-layer fashion, we could locate them in a neutral plane where stress is minimal. This maintains device performance under severe mechanical deformation.” 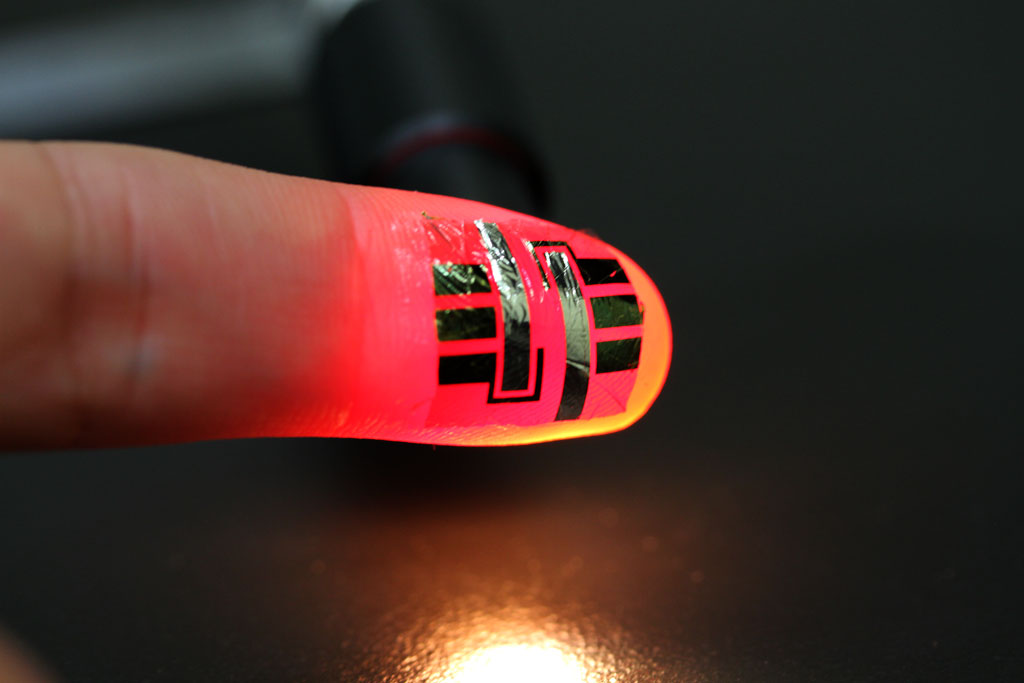 A photograph showing the blood film sensor attached to a fingertip. The sensor is based on ultrathin, flexible organic film. Image: © 2018 RIKEN Center for Emergent Matter Science

The resulting ultrathin device, which was a mere 3 micrometers thick, showed exceptional durability during testing, maintaining millisecond-quick response times to near-infrared light even when compressed to half its original size.

The polymer’s slim form enabled it to adhere tightly to curved parts of the body and eliminate artifacts caused by movements during measurements.

Inspired by these results, the researchers attached the polymer to a volunteer’s fingertips and demonstrated it could act as a device that measures blood flow characteristics using infrared light, with a sensitivity that exceeds conventional devices with glass substrates.

The team intends to integrate such photodetectors with organic light-emitting diodes, power sources (either solar cells or batteries), and processors to realize self-powered sensor systems.