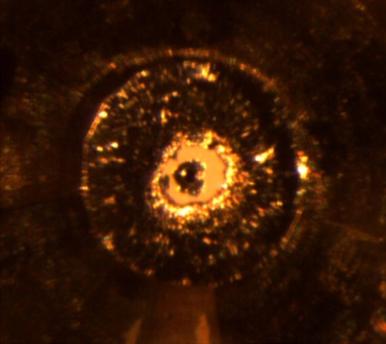 An international team working at the Advanced Photon Source at Argonne National Laboratory has devised a method for achieving static pressures vastly higher than any previously reached. Above: an image of a diamond anvil cell inside the pressure chamber. Traditionally, a diamond anvil cell works like a vice that squeezes the sample between two single-crystal diamonds to produce extreme pressure. In the new device, a miniscule ball of nano-crystalline diamonds sits atop each single-crystal diamond. As the diamonds are squeezed together, the load is transferred from the larger diamond to the nano-ball. This causes the nano-diamond balls to compress and actually get harder, allowing them to both generate and withstand extreme pressures. Image via Dubrovinskaia et al./Science.

Extraordinary things happen to ordinary materials when they are subjected to very high pressure and temperature. Sodium, a conductive metal in normal conditions, becomes a transparent insulator; gaseous hydrogen becomes a solid.

But generating the terapascal pressures — that’s ten million times the atmospheric pressure at the earth’s surface — needed to explore the most extreme conditions in the laboratory has been possible only with the use of shock waves, which generate the pressure for a very short time and then destroy samples. Now an international team working at the U.S. Department of Energy’ (DOE) Advanced Photon Source (APS), a DOE Office of Science User Facility at Argonne National Laboratory, has devised a method for achieving static pressures vastly higher than any previously reached.

“Achieving ultra-high pressures opens new horizons for a deeper understanding of matter,” said Leonid Dubrovinsky, a scientist at the University of Bayreuth, Germany, who was one of the developers of the new method. “It is of great importance for the fundamental sciences, for modeling the interior of giant planets and for the development of novel materials with unusual properties for technological applications.”

“It is a huge step,” said Vitali Prakapenka, a scientist at the Center for Advanced Radiation Sources at the University of Chicago who worked on the experiments.

Dubrovinsky and colleagues designed a version of a double-stage diamond anvil cell typically used to generate high pressures. The traditional apparatus works like a vice that squeezes the sample between two single-crystal diamonds. In the new device, a miniscule ball of nano-crystalline diamonds sits atop each single-crystal diamond. As the diamonds are squeezed together, the load is transferred from the larger diamond to the nano-ball. The nano-diamond balls compress and actually get harder, allowing them to both generate and withstand extreme pressures.

The researchers further extended the capabilities of the apparatus by introducing a gasket assembly that acts as a secondary pressure chamber inside the cell, allowing them to work with gases and liquids as well as solids.

The transparency of the new nano-diamond balls opens the possibility for achieving high pressure and high temperature simultaneously. “We can shine the high power laser through the diamond anvil and through the nano-diamond as well, and heat the sample when it’s already pressurized,” said Prakapenka. “And we can then probe the sample properties in situ with synchrotron X-ray techniques.”

This ability to probe matter at ultra-high static pressures has important implications for understanding the physics and chemistry of materials. The most direct immediate application is to the study of the materials under tremendous pressure on the interiors of the giant planets. But Prakapenka suggests other possibilities.

“We can synthesize absolutely new materials with unique properties that we would never have predicted,” he said. “And we believe that there still exist some materials that we can synthesize only at high pressure, like superconductors, and then quench down, bring to ambient conditions and use. In this case it’s a very small amount — it’s only microns — but for the future application in nanorobotic technology, who knows.”

The group worked at the GeoSoilEnviro Consortium for Advanced Radiation Sources (GSECARS) beamline, which is operated by the University of Chicago at Sector 13 of the APS. The high intensity and energy of the APS’s X-ray beams were crucial for the experiments. “The beam should be intense enough to go through the diamond anvil and through the one- or two-micron sample and give you enough statistics to see diffraction from the sample,” said Prakapenka. “You need very high-intensity, high-energy X-rays to do that. It’s only possible at third-generation synchrotrons like APS.”

Also critical were GSECARS’s monochromator, optics and imaging systems, which bring the beam to the sample position, focus it down to a spot less than three microns and let the scientists see and analyze the sample in situ.