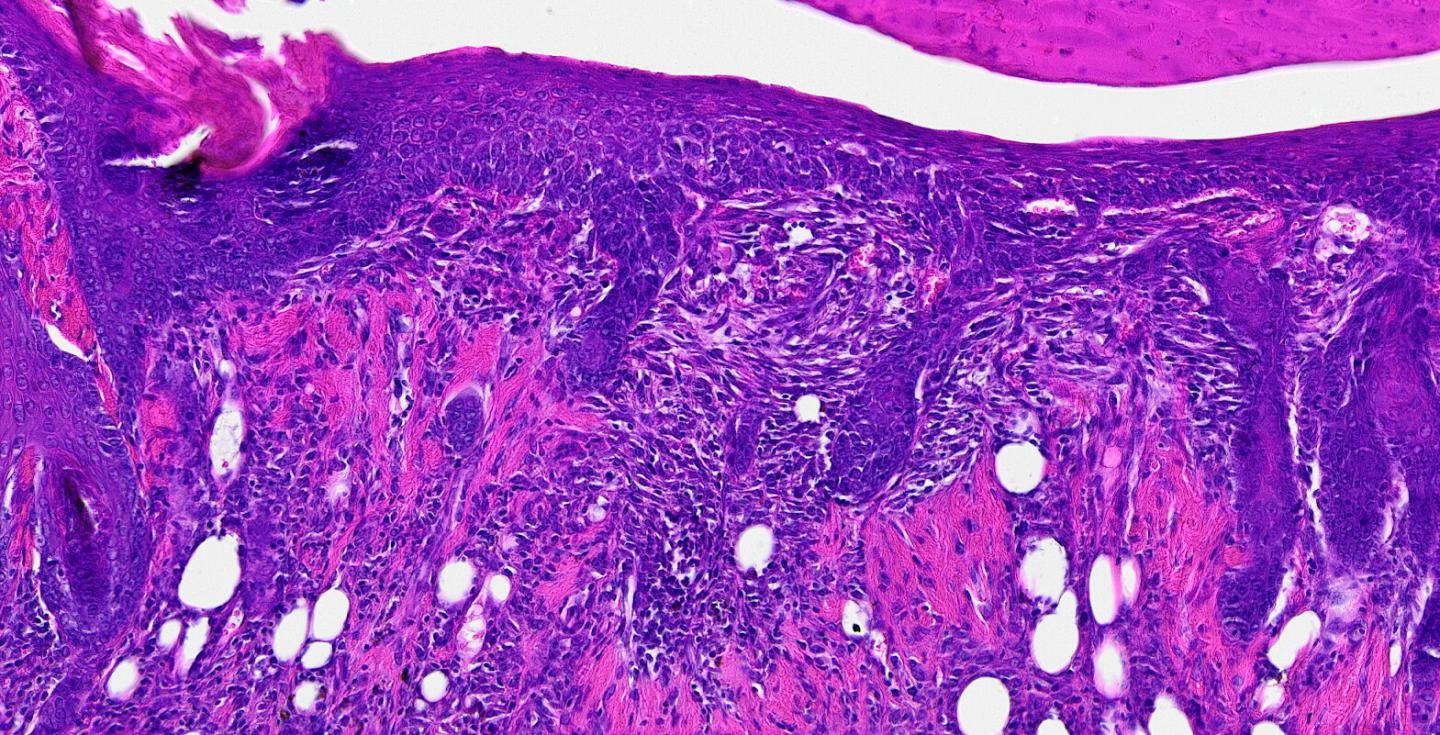 This is a tissue section 14 days post-wounding reveals the presence of hair follicles regenerating at the center of the wound. Re-growing hair follicles is one of the biggest challenges in the field of wound healing.

Researchers from the Harvard John A. Paulson School of Engineering and Applied Sciences (SEAS) and the Wyss Institute for Biologically Inspired Engineering have developed new wound dressings that dramatically accelerate healing and improve tissue regeneration. The two different types of nanofiber dressings, described in separate papers, use naturally-occurring proteins in plants and animals to promote healing and regrow tissue.

“Our fiber manufacturing system was developed specifically for the purpose of developing therapeutics for the wounds of war,” said Kit Parker, the Tarr Family Professor of Bioengineering and Applied Physics at SEAS and senior author of the research. “As a soldier in Afghanistan, I witnessed horrible wounds and, at times, the healing process for those wounds was a horror unto itself. This research is a years-long effort by many people on my team to help with these problems.”

Parker is also a Core Faculty Member of the Wyss Institute.

The most recent paper, published in Biomaterials, describes a wound dressing inspired by fetal tissue.

In the late 1970s, when scientists first started studying the wound healing process early in development, they discovered something unexpected: wounds incurred before the third trimester left no scars. This opened a range of possibilities for regenerative medicine. But for decades, researchers have struggled to replicate those unique properties of fetal skin.

Unlike adult skin, fetal skin has high levels of a protein called fibronectin, which assembles into the extracellular matrix and promotes cell binding and adhesion. Fibronectin has two structures: globular, which is found in blood, and fibrous, which is found in tissue. Even though fibrous fibronectin holds the most promise for wound healing, previous research focused on the globular structure, in part because manufacturing fibrous fibronectin was a major engineering challenge.

But Parker and his team are pioneers in the field of nanofiber engineering.

The researchers made fibrous fibronectin using a fiber manufacturing platform called Rotary Jet-Spinning (RJS), developed by Parker’s Disease Biophysics Group. RJS works likes a cotton candy machine — a liquid polymer solution, in this case globular fibronectin dissolved in a solvent, is loaded into a reservoir and pushed out through a tiny opening by centrifugal force as the device spins. As the solution leaves the reservoir, the solvent evaporates and the polymers solidify. The centrifugal force unfolds the globular protein into small, thin fibers. These fibers — less than one micrometer in diameter — can be collected to form a large-scale wound dressing or bandage.

“The dressing integrates into the wound and acts like an instructive scaffold, recruiting different stem cells that are relevant for regeneration and assisting in the healing process before being absorbed into the body,” said Christophe Chantre, a graduate student in the Disease Biophysics Group and first author of the paper.

The researchers also demonstrated that wounds treated with the fibronectin dressing have close to normal epidermal thickness and dermal architecture, and even regrew hair follicles — often considered one of the biggest challenges in the field of wound healing.

“This is an important step forward,” said Chantre. “Most work done on skin regeneration to date involves complex treatments combining scaffolds, cells and even growth factors. Here we were able to demonstrate tissue repair and hair follicle regeneration using an entirely material approach. This has clear advantages for clinical translation.”

In another paper published in Advanced Healthcare Materials, the Disease Biophysics Group demonstrated a soy-based nanofiber that also enhances and promotes wound healing.

Soy protein contains both estrogen-like molecules — which have been shown to accelerate wound healing — and bioactive molecules similar to those that build and support human cells.

“Both the soy and fibronectin fiber technologies owe their success to keen observations in reproductive medicine,” said Parker. “During a woman’s cycle, when her estrogen levels go high, a cut will heal faster. If you do a surgery on a baby still in the womb, they have scar-less wound healing. Both of these new technologies are rooted in the most fascinating of all the topics in human biology — how we reproduce.”

“These findings show the great promise of soy-based nanofibers for wound healing,” said Seungkuk Ahn, a graduate student in the Disease Biophysics Group and first author of the paper. “These one-step, cost-effective scaffolds could be the next generation of regenerative dressings and push the envelope of nanofiber technology and the wound care market.”

Both kinds of dressing, according to researchers, have advantages in the wound-healing space. The soy-based nanofibers — consisting of cellulose acetate and soy protein hydrolysate — are inexpensive, making them a good option for large-scale usage, such as on burns. The fibronectin dressings, on the other hand, could be used for smaller wounds on the face and hands, where the prevention of scarring is important.