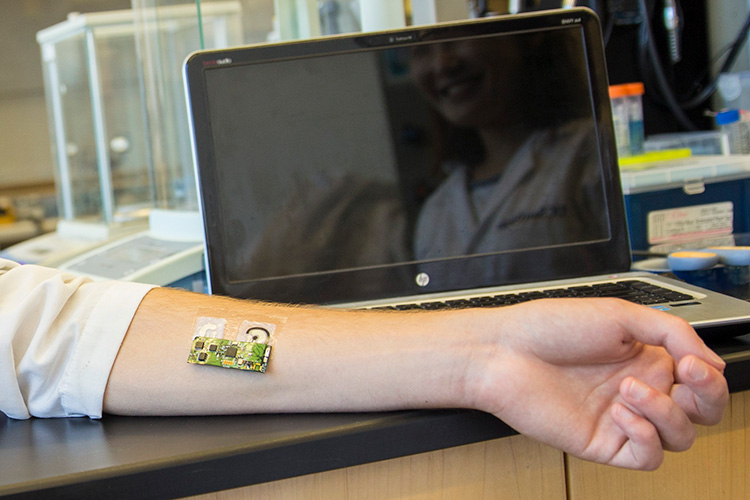 A new type of temporary tattoo could potentially prevent drunk driving accidents in the future.

Engineers from the University of California, San Diego designed an electronic wearable patch that can measure an individual’s blood alcohol level through sensible sweat, the visible form of perspiration that could provide a better real-time indicator of a person’s blood alcohol concentration.

The invention is comprised of screen-printed electrodes, a miniature hydrogel patch housing a sweat-inducing drug called pilocarpine, as well as a flexible electronic circuit board that simultaneously powers the tattoo and enables wireless communication with a mobile device.

“Lots of accidents on the road are caused by drunk driving. This technology provides an accurate, convenient and quick way to monitor alcohol consumption to help prevent people from driving while intoxicated,” said nanoengineering professor Joseph Wang, one of the co-leaders of this experiment, in a statement.

It was tested on nine healthy volunteers where it was attached to their arms after drinking either a bottle of beer or a glass of red wine, according to the university’s announcement.

The process begins when the tattoo discharges the pilocarpine to make the wearer sweat. An electrode coated in the alcohol oxidase enzyme will react by generating hydrogen peroxide upon coming into contact with the individual’s perspiration.

Hydrogen peroxide can be detected electrochemically so that information is transformed into electrical signals sent wirelessly to a mobile device through Bluetooth, per the university’s press release.

It took about 15 minutes for the tattoo to deliver results. The accuracy of the results remained intact after numerous attempts at bending and shaking the tattoo emphasizing read-outs won’t be impaired by movement.

Wang suggested that this technology could eventually be built into a car’s alcohol ignition locks, but his team’s next steps will be designing a device that may be able to monitor alcohol levels for a full 24 hours.

Another organization is developing an alternative method for tracking blood alcohol levels with a slight tweak.

San, Francisco-based BACtrack won a $200,000 grand prize in May for its prototype wrist monitor named BACtrack Skyn. This device measures the ethanol seeping through a person’s skin in order to determine how much they’ve had to drink, but takes 45 minutes to completely analyze the information it’s given.