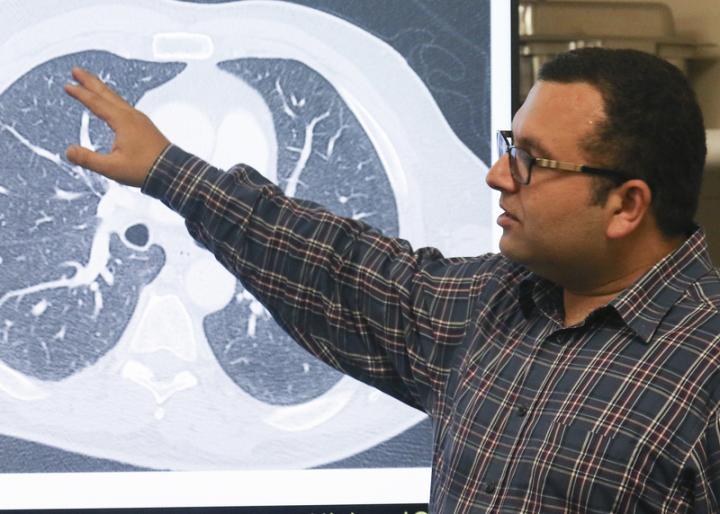 Assistant Professor Ulas Bagci leads the group of engineers at the University of Central Florida that have taught a computer how to detect tiny specks of lung cancer in CT scans, which radiologists often have a difficult time identifying. The artificial intelligence system is about 95 percent accurate, compared to 65 percent when done by human eyes, the team said

Doctors may soon have help in the fight against cancer thanks to the University of Central Florida’s Computer Vision Research Center.

Engineers at the center have taught a computer how to detect tiny specks of lung cancer in CT scans, which radiologists often have a difficult time identifying. The artificial intelligence system is about 95 percent accurate, compared to 65 percent when done by human eyes, the team said.

“We used the brain as a model to create our system,” said Rodney LaLonde, a doctoral candidate and captain of UCF’s hockey team. “You know how connections between neurons in the brain strengthen during development and learn? We used that blueprint, if you will, to help our system understand how to look for patterns in the CT scans and teach itself how to find these tiny tumors.”

The approach is similar to the algorithms that facial-recognition software uses. It scans thousands of faces looking for a particular pattern to find its match.

Engineering Assistant Professor Ulas Bagci leads the group of researchers in the center that focuses on AI with potential medical applications.

The group fed more than 1,000 CT scans – provided by the National Institutes of Health through a collaboration with the Mayo Clinic – into the software they developed to help the computer learn to look for the tumors.

Graduate students working on the project had to teach the computer different things to help it learn properly. Naji Khosravan, who is pursuing his doctorate degree, created the backbone of the system of learning. His proficiency at novel machine learning and computer vision algorithms led to his summer as an intern at Netflix helping the company with various projects.

LaLonde taught the computer how to ignore other tissue, nerves and other masses it encountered in the CT scans and analyze lung tissues. Sarfaraz Hussein who earned his doctorate degree this past summer, is fine-tuning the AI’s ability to identify cancerous versus benign tumors, while graduate student Harish Ravi Parkash is taking lessons learned from this project and applying them see if another AI system can be developed to help identify or predict brain disorders.

“I believe this will have a very big impact,” Bagci said. “Lung cancer is the number one cancer killer in the United States and if detected in late stages, the survival rate is only 17 percent. By finding ways to help identify earlier, I think we can help increase survival rates.”

The team will present its finding in September at the largest premier conference for medical imaging research – the MICCAI 2018 conference in Spain. The team’s work has been published in advance of the conference. https://arxiv.org/pdf/1805.02279.pdf

The next step is to move the research project into a hospital setting; Bagci is looking for partners to make that happen. After that, the technology could be a year or two away from the marketplace, Bagci said.

“I think we all came here because we wanted to use our passion for engineering to make a difference and saving lives is a big impact,” LaLonde said.

Ravi Prakash agrees. He was studying engineering and its applications to agriculture before he heard about Bagci and his work at UCF. Bagci’s research is in the area of biomedical imaging and machine learning and their applications in clinical imaging. Previously, Bagci was a staff scientist and the lab manager at the NIH’s Center for Infectious Disease Imaging lab, in the department of Radiology and Imaging Sciences.