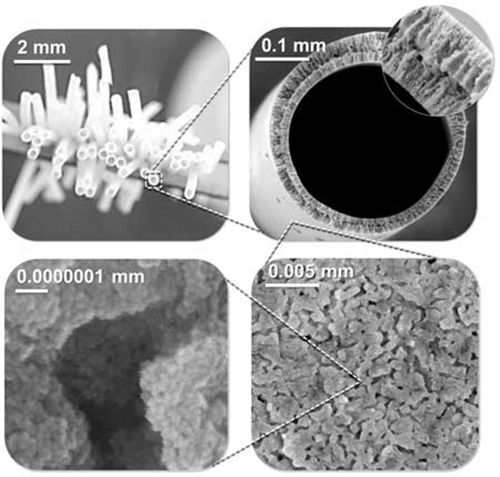 A tube-shaped bijel filter. Researchers at the University of Pennsylvania’s School of Engineering and Applied Science have a new way of making polymer filters out of bijels, or bicontinuous interfacially jammed emulsion gels, that allow functional nanoparticles to adhere to the surface of the polymer. They tested their method with nanoparticles that prevent the build-up of biofilms. Photo: University of Pennsylvania

Filtration membranes are, at their core, sponge-like materials that have micro- or nanoscopically small pores. Unwanted chemicals, bacteria and even viruses are physically blocked by the maze of mesh, but liquids like water can make it through.

The current standard for making these filters is relatively straightforward, but doesn’t allow for much in the way of giving them additional functionality. This is a particular need when it comes to “biofouling.” The biological material they are supposed to filter out — including bacteria and viruses– gets stuck on the surface of the mesh, blocking the pores with a slimy residue.

Beyond reducing the flow, such biofilms can potentially contaminate whatever liquid makes it through to the other side of the filter.

Researchers at the University of Pennsylvania’s School of Engineering and Applied Science have a new way of making membranes that could address this problem. Their method allows them to add in a host of new abilities via functional nanoparticles that adhere to the surface of the mesh.

They have demonstrated this new process with membranes that block bacteria- and virus-sized contaminants without letting them stick, a property that would vastly increase the efficiency and lifespan of the filter.

The “antifouling” membranes they have tested would be immediately useful in relatively simple applications, like filtering drinking water, and could eventually be used on the oily compounds found in fracking wastewater and other heavy-duty pollutants.

The researchers’ method, described in a paper recently published in the journal Nature Communications, allows for membranes made from a wide range of polymers and nanoparticles. Beyond antifouling abilities, future nanoparticles could catalyze reactions with the contaminants, destroying them or even converting them into something useful.

The study was led by Daeyeon Lee, a professor in Penn Engineering’s Department of Chemical and Biomolecular Engineering, and Kathleen Stebe, Penn Engineering’s Deputy Dean for Research and Richer & Elizabeth Goodwin Professor of Chemical and Biomolecular Engineering, along with Martin F. Haase, an assistant professor at Rowan University who developed the technology as a postdoctoral researcher in the labs of Stebe and Lee. Harim Jeon, Noah Hough, and Jong Hak Kim also contributed to the study.

The researchers’ new membrane-making method relies on a specialized type of liquid mixture known as a “bicontinuous interfacially jammed emulsion gel,” or “bijel.” Unlike emulsions that consist of isolated droplets, both the oil and water phases of bijels consist of densely intertwined but fully connected networks. Nanoparticles introduced to the emulsion find their way to the interface between the oil and water networks.

Lee, Stebe and Haase previously devised a new way of making bijels that allows for a greater range of component materials, which they described in a 2015 Advanced Materials paper. Now, they have shown a way to make a solid filter using the same method.

“We knew this technology had promise,” Stebe said. “Some of that promise is now being made real.”

As with their earlier bijels, this filter begins as an intertwined network of water and oil, with a dense layer of nanoparticles separating the two. But by using an oil that can be polymerized with UV light — crosslinking free-floating individual molecules into a solid, 3D mesh — the researchers are now able to solidify the structure of the bijel.

Critically, this method leaves the dense layer of nanoparticles in place on the surface of the polymer after the water has been flowed away. Conventional ways of making polymer membranes don’t allow for this.

“In our experiment, we were able to filter out very small gold nanoparticles, in sizes equivalent to viruses,” said Lee. “The tube shape also works well in large-scale implementation of these filter membranes. Because they have large surface-area-to-volume ratios and don’t get clogged, we can draw in fluid from the sides and suck it out from the end, allowing for continuous filtration.”

“Membranes are typically passive materials that do not adapt their properties when environmental conditions change,” said Haase. “An exciting aspect about our membranes is that they can be made to open and close their pores in response to a chemical signal. This unique feature enables the membrane to have controllable permeability, which is useful for the separation of different types of contaminants from water.”

Lee is also a co-principal investigator at Penn Engineering’s REACT, or Research and Education in Active Coatings Technologies for human habitat. This multidisciplinary program is aimed at improving shelters used in disaster relief, and as such, Lee has interacted with emergency responders and equipment providers, such as ShelterBox.

“When we spoke to people at ShelterBox, they said that more than a tent, what people need is clean water,” Lee said. “REACT could potentially make these filters part of a system that does both.”

With several ongoing refugee crises around the world and millions still without potable water after hurricane Maria struck Puerto Rico, the importance of this development is not lost on the researchers.

“There are really people right now who need this kind of technology so badly,” said Stebe.