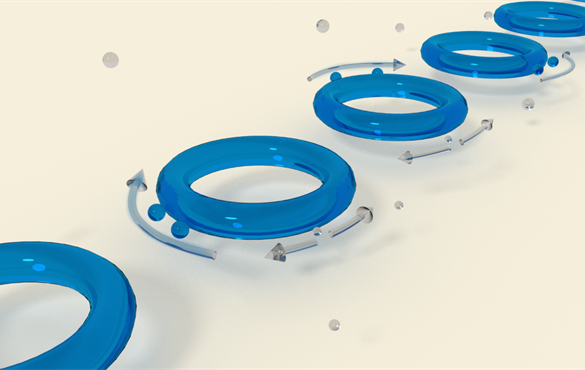 t’s long been thought that two’s company and three’s a crowd. But electrical and systems engineers at Washington University in St. Louis and their collaborators have shown that the addition of a third nanoscatterer, complementing two “tuning” nanoscatterers, to a photonics resonator makes for a fascinating physics party. (Credit: W. Chen and L. Yang)

It’s long been thought that two’s company and three’s a crowd. But electrical and systems engineers at Washington University in St. Louis and their collaborators have shown that the addition of a third nanoscatterer, complementing two “tuning” nanoscatterers, to a photonics resonator makes for a fascinating physics party.

Specifically, the two tuning nanoscatterers set the resonator at an “exceptional point,” a special state of a system at which unusual phenomena may occur. The third nanoscatterer perturbs the system, and like a nasty playground bully, the smaller it is, the more response it gets.

The Washington University team, led by Lan Yang, the Edwin H. & Florence G. Skinner Professor of Electrical & Systems Engineering, has made major strides recently in the study and manipulation of light. The team’s most recent discovery of the sensing capability of microresonators could have impacts in the creation of biomedical devices, electronics and biohazard detection devices.

“It’s challenging to detect nanoscale objects, such as nanoparticles,” Yang said. “If the object is very small, it introduces little perturbation to a sensing system. We utilize an unusual topological feature associated with exceptional points of a physical system to enhance the response of an optical sensor to very small perturbations, such as those introduced by nanoscale objects. The beauty of the exceptional point sensor is the smaller the perturbation, the larger the enhancement compared to a conventional sensor.”

Yang’s sensor system belongs to a category called whispering gallery mode (WGM) resonators, which work like the famous whispering gallery in St. Paul’s Cathedral in London, where someone on one side of the dome can hear a message spoken to the wall by someone on the other side. Unlike the dome, which has resonances or sweet spots in the audible range, the sensor resonates at light frequencies.

“The so-called ‘exceptional point’ endows a whispering-gallery sensor with exceptional performance for detecting nanoscale objects, surpassing that of conventional whispering-gallery sensors,” said Weijian Chen, an electrical engineering doctoral student in Yang’s lab. “Strikingly, the smaller the target object is, the better the performance of our new sensor will be.”

Yang’s WGM features two companion silica scatterers, or nanotips, which set on the toroid, or donut-shaped wire, the avenue for millions of light packets called photons to traverse. These devices tune various parameters in the system to influence function. Using nanopositioning systems, the researchers can move the scatterers and increase the size and even introduce another medium—a virus particle, for instance—into the field to perturb the field and beckon an exceptional point.

In the team’s most recent experiments, the two “tuning” nanoscatterers bring the resonator to exceptional points; the third particle perturbs the system from its exceptional points and leads to a frequency splitting. Because of the very complex-square-root topology near an exceptional point, the frequency-splitting, which is the sensing signal, is represented mathematically as the square root of the perturbation strength. It is significantly larger than what is found in traditional, non-exceptional point-sensing schemes using very small perturbations.

Yang and her group are exploring the use of the exceptional point in photoacoustic imaging studies and other scenarios where they seek development of “unconventional light transport modes,’ she said. “There should be many applications arising from that.”