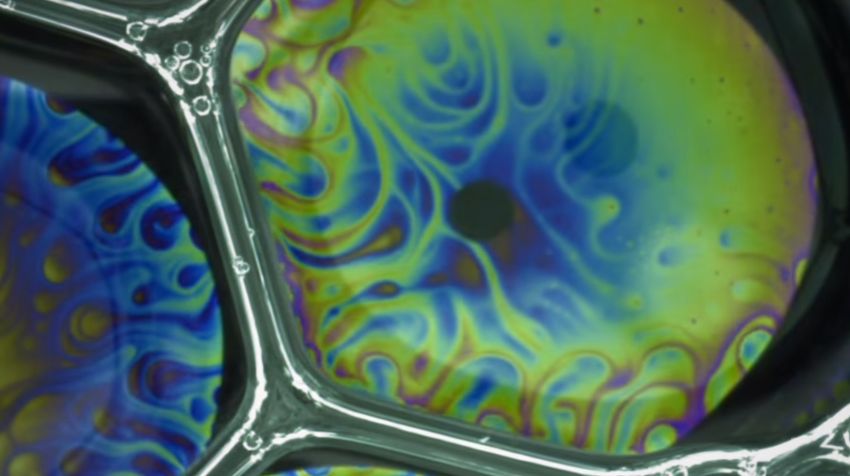 The spinning rainbow surface of a soap bubble is more than mesmerizing – it’s a lesson in fluid mechanics. Better understanding of these hypnotic flows could bring improvements in many areas, from longer lasting beer foam to life-saving lung treatments.

The whirling on the surface of bubbles is caused in part by the Marangoni effect. This phenomenon occurs when molecules called surfactants move from areas of low surface tension to areas of higher surface tension along the boundary between two different substances. Your body is full of natural surfactants, such as the tear film of our eyes and the fluid contained in the tiny air sacs within our lungs. In a soap bubble, the Marangoni effect helps stabilize the bubble by creating a more even distribution of surface tension.

Prompted by the inquisitiveness of a high school intern, researchers at Stanford have figured out how to pause this swirling – a feat never before documented. The research, published in Physics Review Fluids, allows for closer examination of these flows, while also producing kaleidoscopic works of art.

“We were able to actually stop the Marangoni flows. Arrest them. It was a remarkable phenomenon and with very delicate control of these flows and these patterns,” said co-author Gerald Fuller, a professor of chemical engineering.

The researchers achieved this control by creating an air bubble about 1 millimeter across under the surface of a soapy solution, raising the bubble quickly to the surface, pausing and then raising it again. With each bump upward, they launched a new layer of Marangoni flows at the outer rim of the bubble, which trapped the previous layer. They were able to create as many as seven different Marangoni flows in one bubble.

These halted flows are mysterious because they are akin to freezing a crashing wave.

“The colors on the bubbles indicate the thickness of the film, so you have these valleys and hills that are in a geometrical frustrated state on a surface that itself is ephemeral,” said lead author Saad Bhamla, who conducted the work in Fuller’s lab as a graduate student and is now a postdoctoral scholar in bioengineering. “An interesting question is why you are able to do that in the first place.”

Bubbles are inexpensive, seemingly straightforward, and easy to make and manipulate. This makes them a powerful tool for researchers. Like mice and fruit flies, bubbles are a model system, a prime choice for experimentation.

“You almost expect that things that are mundane – day-to-day objects, simple things – are all figured out. You take it for granted,” Bhamla said. “If you ask the question ‘Why?’ even the simplest things have a lot that we can discover about them because we have better tools today, we have better techniques today.”

Countless disciplines have looked into the power of bubbles, including computing, architecture, math and biology. In the 17th century, Isaac Newton used bubbles to investigate optics. More than 300 years later, physicist Pierre-Gilles de Gennes discussed soap bubbles and surfactants in his Nobel lecture for the 1991 Nobel Prize in physics.

Previously, the Fuller Research Group has worked on alleviating dry eyes and on concocting replacements for lung surfactants, which are used to prevent collapsed lungs in newborns that result from a condition called neonatal respiratory distress syndrome. At present, the lab is studying the dynamics of bubbles and the Marangoni effect as they relate to the quality of beer foam, separating crude oil from water and the creation of unwanted bubbles in drug formulations, which can reduce the efficacy of a drug therapy.

“As you appreciate prevalence of surfactant foams in food products and in personal products, you realize that there is a need to understand the lifetime of these systems,” Fuller said.

Current work on this project also involves stepping back and deconstructing the phenomenon in order to more fully understand its implications.

These immobilized waves created patterns so beautiful that the researchers made a short film of their experiment, coupled with an animated explanation of the Marangoni effect. The video won a Milton Van Dyke Award from the American Physical Society, an award named for a former Stanford professor of mechanical engineering and of aeronautics and astronautics. Van Dyke was known for his promotion of scientific education and appreciation for the beauty of fluid motion. This award acknowledges outstanding visual examples of fluid mechanics.