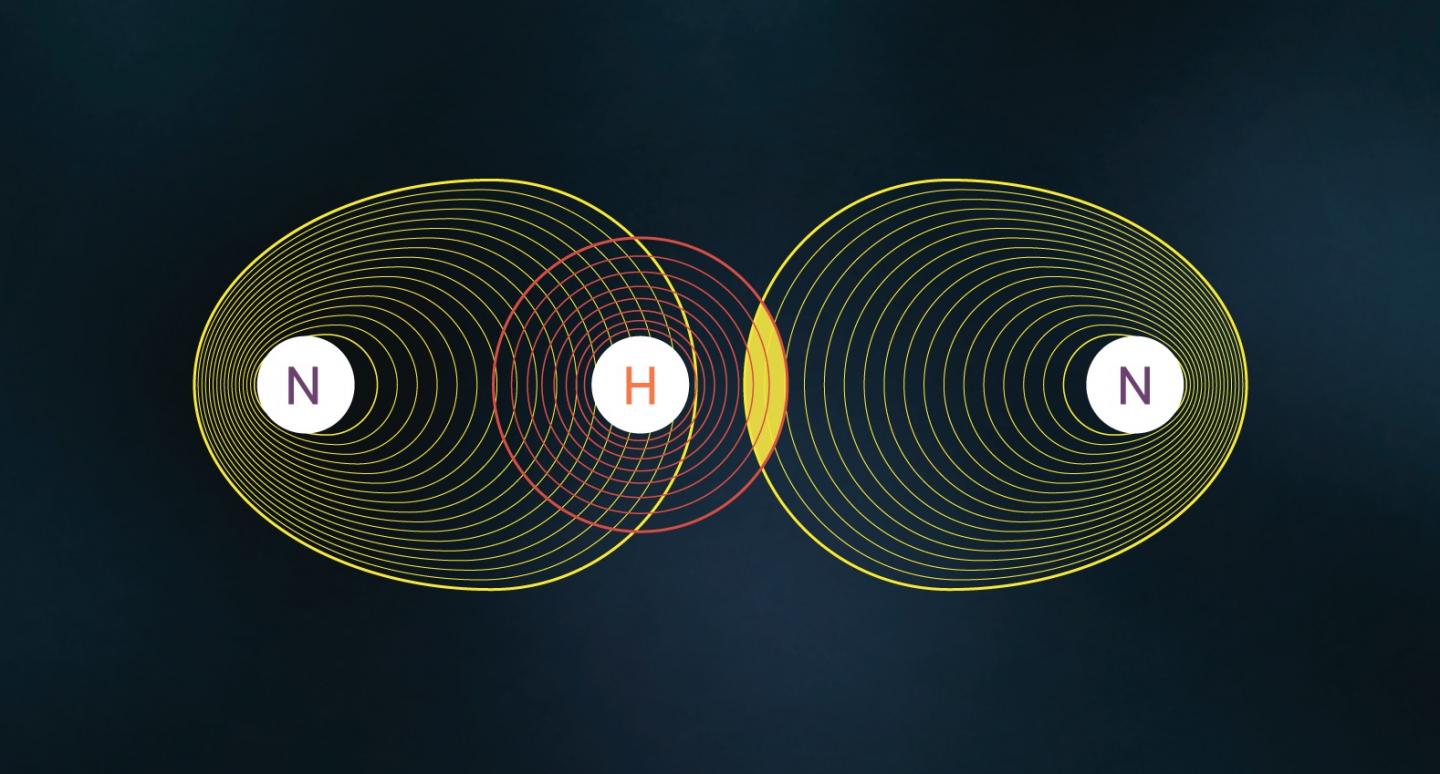 This image shows the formation of a hydrogen bond. Source: MIPT press-ofice

Researchers from the Institute of Molecular Science and Technologies (ISTM-CNR, Italy), Moscow Institute of Physics and Technology (MIPT), and the University of Milan have experimentally confirmed a model to detect electron delocalization in molecules and crystals. The chemists, whose paper was published in Acta Crystallographica on April 1, 2016, have also illustrated examples on how the same approach have been used to obtain precious insights into the chemical bonding of a wide variety of systems, from metallorganic compounds to systems of biological relevance.

As electrons are quantum objects, they cannot be clearly identified (or, to use the scientific term, localized) in a particular place. This means that the behaviour of electrons cannot be described using equations that work with regular, non-quantum objects: instead of an electron as a ball within a molecule, scientists have to examine a blurred cloud. Developing a mathematical model to determine the distribution of electrons relatively quickly and accurately is one of the most significant challenges of modern science.

“The main novelty introduced by our study is the possibility of detecting electron delocalization directly from experimental data. Electron delocalization, which is a cornerstone paradigm of chemistry (fundamental, for example, for understanding aromaticity), could so far be estimated only through approaches relying on quantities not obtainable from experimental measurements, e.g. the so-called ‘delocalization index’. Our results may therefore pave the way for looking at this important phenomenon in a new fashion” – writes Gabriele Saleh, one of the co-authors of the study.

The mathematical model proposed in 1998 by the Canadian expert in quantum chemistry Richard Bader and the Italian researcher Carlo Gatti sees electron distribution in a crystal as the sum of contributions of so-called Source Functions. From this point of view, a molecule (or crystal) is seen as a set of individual elements, each of which contributes to the final distribution. This approach, as shown by subsequent studies, provides an insightful view of hydrogen bonds, metal-ligand bonds, and other types of chemical interactions.

From theory to practice

In 2016, Carlo Gatti, Gabriele Saleh (researcher at MIPT’s Laboratory of Computer Design of Materials) and Leonardo Lo Presti of the University of Milan demonstrated yet another use of the Bader-Gatti approach for studying chemical bonding directly from experimental results. For the analysis, they used data obtained previously by European and Australian scientists in X-ray and neutron diffraction experiments on samples of benzene, naphthalene and other compounds. In these experiments X-ray beam is directed onto a sample and once it passes through it, it is diffracted. By looking at how this diffraction occurs and in which direction particles are deflected, scientists are able to make conclusions about the distribution of electrons within a crystal under study – this distribution is described using the concept of electron density.

In their paper, the researchers note that the results – presented in the form of X-ray diffraction derived electron density of molecules – allow the Bader-Gatti model to be used to describe the subtle effects associated with electron delocalization in organic molecular crystals. The experimental data is fully consistent with the results of ab initio numerical modelling – based on the fundamental laws of quantum mechanics.

In some cases, electrons within molecules or crystals cannot be related to a particular bond or atom. They belong to the structure as a whole and are called “delocalized electrons”. These particles play a key role in the formation of certain molecules and their behaviour can only be described using the principles of quantum chemistry – e.g. electrons forming a ring in a molecule of benzene or its derivatives.

The modelling of molecules and crystals is important both from a theoretical and from a practical point of view. Detailed knowledge of how electrons are distributed within a subject under study will enable scientists to understand the properties of the substance as a whole; and this information is also needed when calculating interactions between molecules themselves. Data on electron density is of paramount importance to help discover new drugs (to identify exactly which molecules can reach a target protein and react with it), and to calculate the characteristics of materials formed by various molecules.

Among the prospects for further research, there are not only studies about the density of electrons, but also their spins – characteristics which determine the magnetic properties of a material.

The use of methods of quantum mechanics is increasingly blurring the boundary between scientific disciplines, and issues related to the chemistry of compounds are gradually moving into the field of physics and computational mathematics.