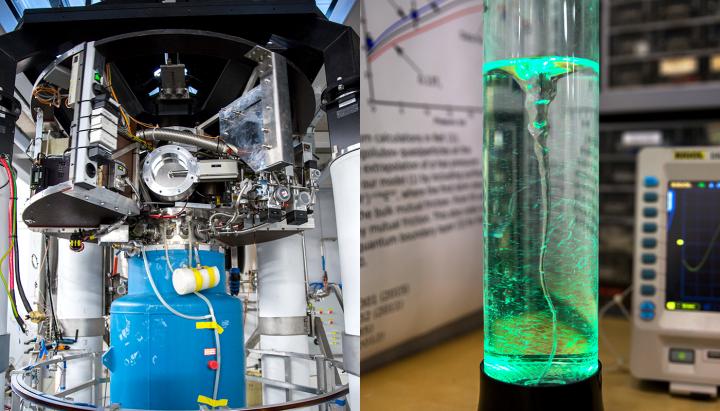 Rotating cryostat with the superfluid helium near absolute zero (left); a novelty model of a vortex inside a container (right) similar to the one inside the cryostat. The actual vortices are perfectly even, whereas in the model, the vortex varies in thickness.

Understanding the causes and effects of the friction could pave the way for explorations into the composition of neutron stars and our universe. Here on Earth, the Aalto researchers’ results will be invaluable for curtailing the production of heat and unwanted glitches in quantum computer components.

“For now, we have to study the phenomenon itself more in depth, before we can have insight exhaustive enough to be applied to experimental research and developing technologies,” notes Jere Mäkinen, doctoral researcher at Aalto University.

When the vortices are in stable and ordered laminar motion at zero temperature, as opposed in endlessly chaotic turbulence, there should be no friction nor means for a vortex to transfer any kinetic energy to its surroundings.

Yet that is exactly what Mäkinen and his supervisor, Dr. Vladimir Eltsov, have now found to happen.

“What we suspect could be a source of the friction are quasi-particles trapped in the cores of the vortices. When the vortices accelerate, the particles gain kinetic energy which dissipates to surrounding particles and creates friction,” explains Mäkinen.

“In turbulent systems, kinetic energy always dissipates from the motion of vortices, but up to now everyone had thought that when vortices are in laminar motion the dissipation of energy is zero at zero temperature. But it turns out, it’s not,” continues Vladimir Eltsov.

Mäkinen compares the dissipation of heat to shaking a box full of table tennis balls: they gain kinetic energy from the moving box and the other balls bouncing around.

Preventing the vortices from dissipating heat and therefore friction, would, for example, enhance the performance of and the ability to retain data in superconducting components used to construct quantum computers.

The holy grail of studies on quantum turbulence is to understand and explain turbulence in classical fluids. The work of Mäkinen and Eltsov is an initial step towards coming to grips with the inner workings of vortices in superfluids. From there, one could move on to comprehending turbulence in our everyday environment, in a ‘classic’ state.

The implications could spin entire industries around. New ways to improve aerodynamics of planes and vehicles of all kinds or controlling the flow of oil or gas in pipelines would open up, just to name a few.

Mysteries of the universe are also contained in these experiments. Collapsed, massively heavy neutron stars are believed to contain complex superfluid systems. Glitches and abnormalities like sudden changes in the stars’ rotation speed, could be caused by bursts of vortices and similar energy dissipation to the one now discovered in the experiments at Aalto University.