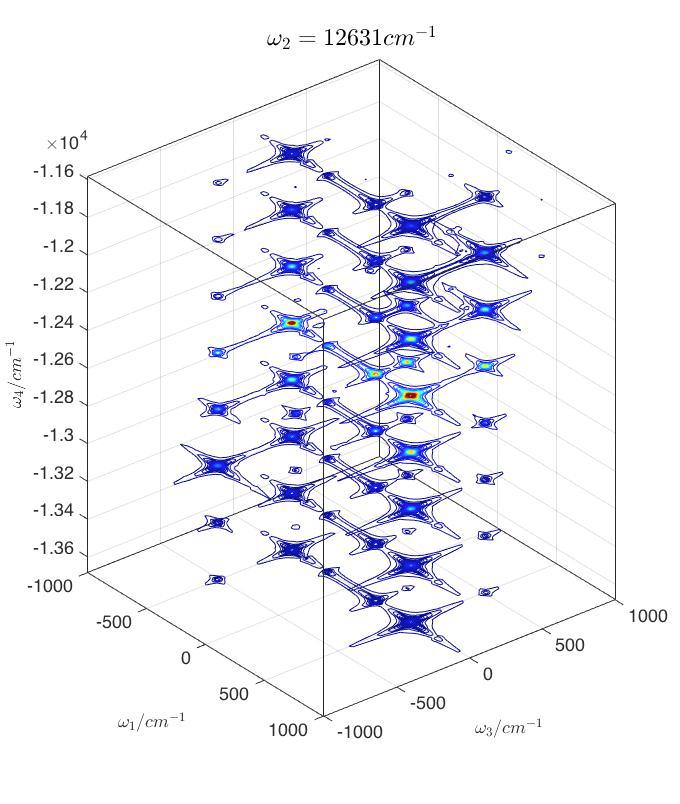 This is a simulated 4-D GAMERS spectrum shown as a 3-D cut through one spectral axis. Two dimensions encode information on vibrational frequencies, while the remaining dimensions represent electronic transitions in the molecule. Source: Harel

Researchers at Northwestern University have created a new method to extract the static and dynamic structure of complex chemical systems. In this context, “structure” doesn’t just mean the 3-D arrangement of atoms that make up a molecule, but rather time-dependent quantum-mechanical degrees of freedom that dictate the optical, chemical and physical properties of the system.

Consider how we view the world: three dimensions in space and one dimension in time, i.e., space-time. Remove any one of these dimensions and the view becomes incomplete and far more confused. For the same reason, this new method uses four spectral dimensions to resolve structure to reveal hidden features of molecular structure.

In this week’s The Journal of Chemical Physics, from AIP Publishing, assistant professor Elad Harel and professor Irving M. Klotz, from the Department of Chemistry at Northwestern University, report a novel 4-D coherent spectroscopic method that directly correlates within and between electronic and vibrational degrees of freedom of complex molecular systems.

Harel’s work involves a theoretical description of a recent experimental method developed in his lab, called GRadient-Assisted Multi-dimensional Electronic Raman Spectroscopy, or “GAMERS.” It’s a multidimensional coherent spectroscopic method in which the dimensions are the electronic and vibrational degrees of freedom of the system.

“Using multiple pulses of light, GAMERS probes how these different degrees of freedom are correlated to one another, creating a sort of spectral map that is unique to each molecule,” Harel said. “[I]t demonstrates that subtle effects dictating the chemical, physical, and optical properties of a system, which are normally hidden in lower-order or lower-dimensionality methods, may be extracted by the GAMERS method.”

Unlike other methods, this enables a uniquely detailed look at the molecules’ energy structure in way that may offer predictive value.

“The shape of the potential surface, which is important for determining the kinetics and thermodynamics of a chemical reaction, may be directly measured,” Harel said. “The level of molecular detail afforded by using more pulses of light to interrogate the system was surprising.”

One potential application of GAMERS could be to pinpoint the physical mechanism of energy transfer during the earliest stages of photosynthesis, a question that remains controversial among researchers, according to Harel.

Right now, the main application of this work “is to enable insights into the physical mechanisms behind a host of quantum phenomena in a wide variety of chemical systems,” Harel said. “These include singlet fission processes, charge carrier generation and transport in hybrid perovskites, and energy transfer in pigment-protein complexes. Understanding these processes has important implications for developing next-generation solar cells.”

The GAMERS method is still in an early phase of development, according to Harel, but the team has high hopes for its future application.