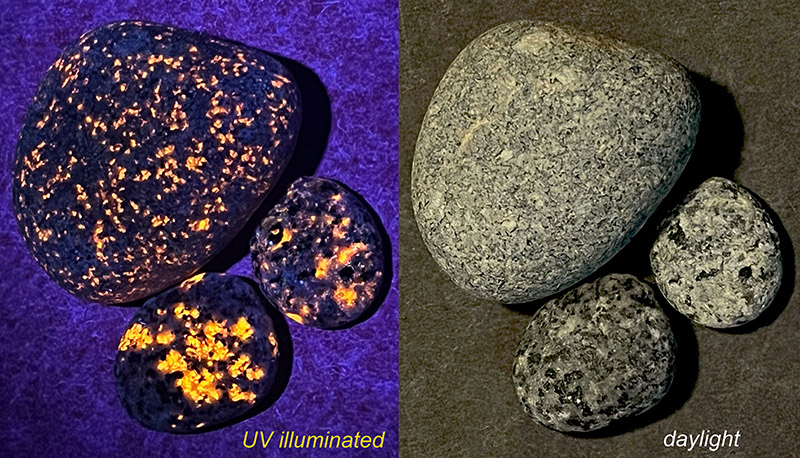 I’ve discovered a new sport, one made possible by Erik Rintamaki. No, he’s not the inventor of pickleball — and the sport I found is not the fastest growing in the U.S. My new sport is a bit more scientific and, for R&Ders, it comes with a useful allegory.

The sport I discovered is Yooperlite hunting. It is a sport practiced in the dark. I’ve only hunted on beaches, specifically the beaches on the southern shore of Lake Superior, in Michigan’s Upper Peninsula. It may be possible to hunt in other locales, but the constant wave action continually turns up new finds. Hunting on dry land, while logic dictates it is possible, would be far more a onetime event.

Yooperlites are the colloquial name for fluorescent rocks, non-descript by day — but startling and interesting when exposed to short wavelength UV light. The name derives from the Upper Peninsula, or UP, where locals are proudly Yoopers. Before jumping into more of the science of Yooperlites, I’ll need to defend my use of sport. This was a topic of a recent lively discussion. The conclusion was that leisure activities can be placed in one of three categories: hobbies, games, or sports. Hobbies are a purely autotelic activity, done only for joy alone. They can be practiced alone. Games require competition. Under our unofficial definition, bridge and poker are games, solitaire is a hobby. Games require scoring. Performance must be measurable. Sports are games with an added caveat. Sports require exertion, real thermodynamic work. A game with sufficient effort is a sport.

I went Yooperlite hunting with others. We walked for miles along the shore in the pitch black, the Milky Way shimmering clearly overhead. As we walked, we shone our UV flashlights into the breaking waves. Glimmers of a glow would put us into rapid action, attempting to grab the stone before the rippling water obscured the location. It quickly turned into a competition. We all were trying to find the most. Counting the rocks found provided scoring. Effort, scoring, and competition. Yooperlite hunting is a sport.

Yooperlites just look like a rock by day, gray and fairly ordinary. They are a syenite, a kind of low-quartz granite, a crystalline igneous rock. It is obvious they aren’t a homogeneous composition when examined closely. There are clear grains, regions where different minerals have crystallized. Yooperlites, the particular syenite clasts we seek, look like many, if not most of other rocks on the beach in visible light. Shine a 365nm UV light on them at night and they glow a bright orange. They are but a tiny fraction of the rocks on the beach. Yooperlites glow due to the presence of sodalite in the rock matrix. Sodalite was not known to be in Michigan until the discovery of Yooperlites.

Lack of known sources of sodalite in Michigan leads most to conjecture Yooperlites were transported to the northern UP. Most point to the Coldwell Alkaline Complex in Ontario as the source — and glaciers as the mode of transportation. The Coldwell Complex is what remains of Precambrian volcano, the cooled remnants of a magma flow. If the guess on the source is correct, the rocks I found came from more than 160 miles (and 1.1 billion years!) away. Sodalite is common in alkali complex. Sodalite is a crystalline aluminosilicate mineral rich in sodium. Commonly blue in daylight, it is a well-known fluorescent mineral. Grains of sodalite, little crystals, glow orange in the presence of my 365nm light.

They aren’t the only thing that glows under UV light on the beach. Exploring a night with a UV light in hand is an interesting experience. My dark shorts were ablaze with white fibers, unseen in normal light. Monofilament fishing line, invisible by day, now made a bright line in the sand. Fish in the shallows, camouflaged by day now glowed an eerie blue. The same was true for toads and frogs at the water’s edge. Let me preface this next observation with a disclaimer that I am not particularly arachnophobic. I don’t cuddle spiders, but they don’t particularly scare me. However, I wasn’t prepared for the surprisingly large and startlingly fast spiders inhabiting the Lake Superior shore. My introduction to Arctosa littoralis was memorable. The 15-mm body of the spider is at the center of about a 60 mm — that’s about 2.5 inches — diameter of rapidly moving legs. These arachnid cheetahs race around the beach, glowing a weird yellow under UV illumination. I’m not scared of spiders, but these rather freaked me out. Beach wolf spiders are a reminder that new approaches can yield unexpected results. Sometimes scary results.

The beach wolf spiders are part of the allegory, something useful for R&Ders. Erik’s discovery of Yooperlites was completely unexpected. Serendipity placed him on a rocky beach with UV light in hand. Many great discoveries have been made thanks to serendipity. (Very rarely do discoveries glow a bright orange color.) They can be subtle. Yet serendipitous discoveries still require recognition. They require an open mind, one capable of recognition of something new. Erik sought agates but ended up finding something far more exciting. The beach wolf spiders are a reminder that not everything you find is useful. It can, at times, be scary.

The last part of the allegory for R&D is about the willingness to take new approaches. Erik sought a better way to find agates by looking in a new way. He framed the problem in a new light. A failed method for finding agates gave something far more interesting. When projects aren’t going well, think of Erik. Stop and ask whether there is a way to shine a different light on the problem. Chances are, there won’t be an immediate bright orange glow. It will likely be far more subtle. However, there may just be a glimmer of a new approach.