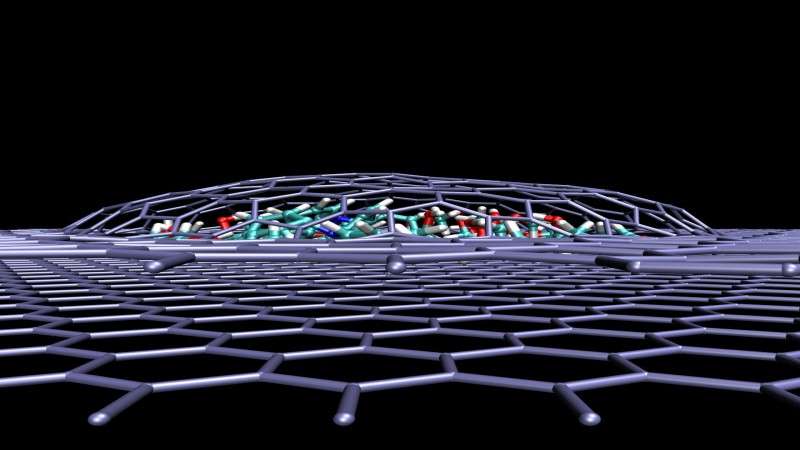 A graphene hydraulic ‘nano-press’ has proved to be capable of creating new two-dimensional materials by exerting huge pressure on compounds sealed between layers of graphene.

Graphene, the world’s first two-dimensional material, has a new property to add to its superlative repertoire. New research has shown that sealing molecules between two atomically thin sheets of graphene creates extreme pressure upon the molecules to modify their state, converting them to new crystals.

The University of Manchester research group, led by Professor Rahul Nair, published the findings in Nature Communications. The striking results demonstrate new methods of creating versatile 2D materials which have unique properties and benefits for a wide range of applications.

The graphene nano-press is made possible due to the material’s unique properties. Graphene is stronger than diamond, which allows the extreme amount of pressure to be exerted on trapped molecules without breaking the graphene layers. The two stacked layers also create a self-sealing envelope around the trapped molecules to contain them.

Molecules enclosed between two layers of graphene experience pressures equivalent of 10,000 times the air pressure in a bicycle tyre.

Professor Nair said: “Due to this extreme high pressure and large confinement of trapped molecules, these graphene enclosures effectively act as a nano scale pressure cooker which works at room temperature.”

Graphene, first isolated and studied at The University of Manchester in 2004, demonstrated that two-dimensional materials have extraordinary properties which could change how we manufacture electronics, composites, batteries and more.

A whole family of 2D crystals have since been discovered, increasing our knowledge and understanding of atomically-thin materials beyond graphene. These new nano-crystals allow us to expand the toolkit with which researchers can work to create the devices and applications of the future.

This research was stimulated by previous work at the National Graphene Institute observing what happens to water molecules at the nanoscale.

2D crystals of copper oxide, magnesium oxide and calcium oxide were produced using this new approach at room temperature which was previously thought to be impossible. Conversion of salt solutions such as copper sulphate, or magnesium chloride usually requires exposure to intense heat and pressure to create these reactions. This new method incurs the same results at room temperature via the pressure created in a one nanometre enclosure between two graphene layers.

Vasu Siddeswara Kalangi, Ph.D., the first author on the research paper said: “The observed effects are not limited to graphene enclosures; other 2D crystals can be used, too. Our study shows the possibility of exploring high pressure chemistry and physics at the nanoscale using the graphene hydraulic press.”

This new research also allows scientists to understand the effect of trapped molecules within new heterostructure devices which could help or disrupt their work.

Exciting new avenues have opened up to allow for a better understanding of the world around us on an atomic scale and accelerating the commercialisation of new graphene-based devices.