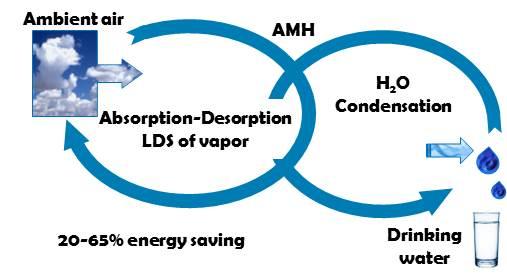 Getting clean water to communities in parched areas of the planet remains an ongoing challenge. Recent developments that harvest water from air have been proposed as a solution. However, the technology to do so consumes a lot of energy. But based on new modeling results, scientists now report in ACS’ journalEnvironmental Science & Technology that a new system design would require less energy and produce high-quality water.

The atmosphere around us contains water vapor in amounts comparable to all the surface and underground liquid freshwater on the planet, according to an International Organization for Dew Utilization study published in 2000. However, current machines that collect water from this airy reservoir have major limitations. For example, one method uses electrical refrigeration to cool the air and condense the vapor, but that consumes 40 to 90 percent of the total system’s energy requirements. Scientists from the Technion (Israel) compared this strategy to their new design that uses a liquid desiccant to first separate the vapor from air and then cool only the vapor. Their calculations show that this approach would result in 20 to 65 percent energy savings over the standard system, depending on where the technology is applied and the sites’ climate conditions.