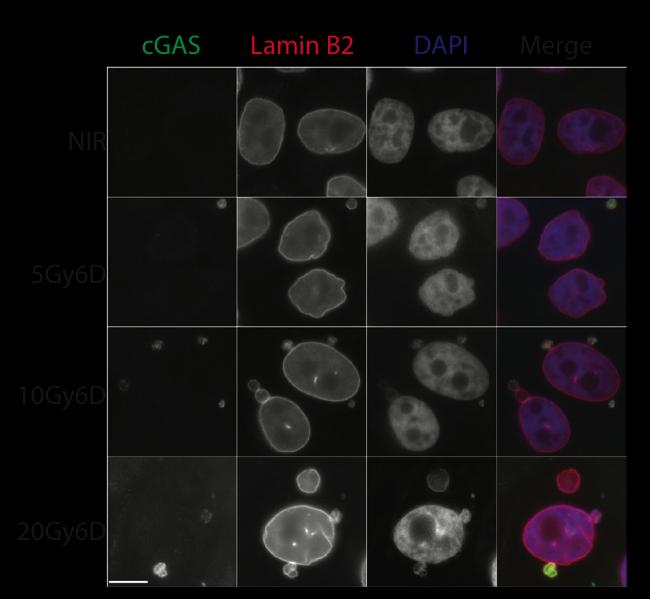 Cancer is essentially a disease of the cell replication cycle. The goal of treating the disease is to permanently kill off the cells that replicate with abandon without any molecular brakes. Chemotherapy and radiation cause breaks in DNA, and eventually, death even in these out-of-control cells. Within minutes after being exposed to treatment, cancer cells call on DNA-repair proteins to counteract the damage wrought by these treatments. Days later, immune cells show up to tumors to assist further in beating back cells that have survived the effects of the toxic therapies.

This delayed arrival of immune cells after cancer therapy is well documented and critical for responses to chemotherapy and radiation, yet the events underlying their induction remain poorly understood. Now, researchers from the Perelman School of Medicine at the University of Pennsylvania have discovered how DNA damage is a clarion call for the immune system. The findings are published this week in Nature.

“Having solved what cues immune cells to arrive at cancer cells with DNA damage in the first place, we can apply that information to design better treatments,” said senior author Roger Greenberg, MD, PhD, a professor of Cancer Biology and director of Basic Science for the Basser Center for BRCA. “This tactic aims to improve a patient’s response to treatment using the immune system at the same time as inhibitors to keep cancer cells on track to replicate until cell death sets in.”

If a cell’s DNA is damaged, it stalls for about 24 hours at a point in the cell replication cycle just prior to entering a phase that leads to cell division. Cells resume dividing as they eventually overcome their wounds, and this leads to activation of signals that attracts the immune system.

In the Nature study, the Penn team describes how DNA damage from cancer therapies causes small packages of DNA from the nucleus to form in the cytoplasm when cells divide after experiencing DNA damage from radiation or chemotherapies. These out-of-place micronuclei tend to rupture, exposing DNA within the cytoplasm to a special surveillance protein. This watchdog molecule is typically activated when invaders such as viruses are detected as foreign DNA in the cytoplasm. The anti-microbe alarm incites an immune response, hailing immune cells to attack micronuclei-filled cancer cells.

The team demonstrated that inhibiting cells from progressing to later cell-division stages prevented micronuclei from forming and strongly reduced immune responses to cancer cells that had been treated with radiation.

Overall, the Nature study reveals that changes in how fast or slow a cancer cell progresses through cell division is an important consideration for cancer therapies that combine DNA damage and immune checkpoint inhibitors.

“Our work allows for the development of rational strategies to increase immune response to enhance patients’ sensitivity to radiation,” Greenberg said. “This approach would combine drugs that damage DNA and inhibit immune checkpoints with those that promote cell division by interfering with the factors that delay cell division in response to DNA damage.”