The field of materials science has become abuzz with “metal-organic frameworks” (MOFs), versatile compounds made up of metal ions connected to organic ligands, thus forming one-, two-, or three-dimensional structures. There is now an ever-growing list of applications for MOF, including separating petrochemicals, detoxing water from heavy metals and fluoride anions, and getting hydrogen or even gold out of it.

But recently, scientists have begun making MOFs, made of building blocks that typically make up biomolecules, e.g. amino acids for proteins or nucleic acids for DNA. Apart from the traditional MOF use in chemical catalysis, these biologically derived MOFs can be also used as models for complex biomolecules that are difficult to isolate and study with other means.

Now, a team of chemical engineers at École polytechnique fédérale de Lausanne (EPFL) Valais Wallis have synthesized a new biologically-derived MOF that can be used as a “nanoreactor”—a place where tiny, otherwise-inaccessible reactions can take place. Led by Kyriakos Stylianou, scientists from the labs of Berend Smit and Lyndon Emsley constructed and analyzed the new MOF with adenine molecules—one of the four nucleobases that make up DNA and RNA. 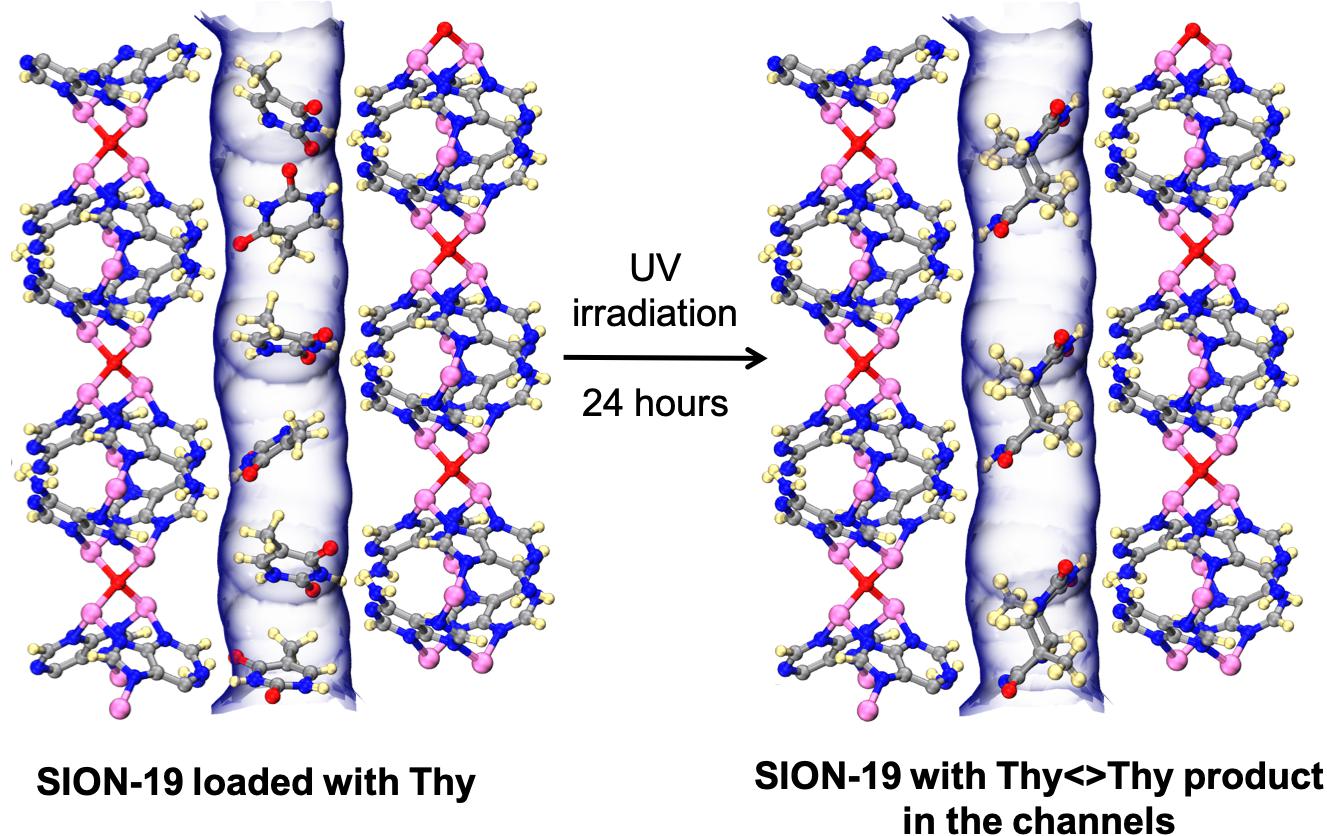 SION-19, a biologically derived MOF based on adenine was used to ‘lock’ Thymine (Thy) molecules in the channels through hydrogen bonding interactions between adenine and thymine. Upon irradiation, thymine molecules were dimerized into di-thymine (Thy<>Thy). Image: Peter G. Boyd/EPFL.

The reason for this was to mimic the functions of DNA, one of which include hydrogen-bonding interactions between adenine and another nucleobase, thymine. This is a critical step in the formation of the DNA double helix, but it also contributes to the overall folding of both DNA and RNA inside the cell.

“The adenine molecules act as structure-directing agents and ‘lock’ thymine molecules in specific positions within the cavities of our MOF,” says Stylianou.

So the researchers took advantage of this locking and illuminated the thymine-loaded MOF—a way to catalyze a chemical reaction.

As a result, the thymine molecules could be dimerized into a di-thymine product, which the scientists were able to be isolate—a huge advantage, given that di-thymine is related to skin cancer and can now be easily isolated and studied.

“Overall, our study highlights the utility of biologically derived MOFs as nanoreactors for capturing biological molecules through specific interactions, and for transforming them into other molecules,” says Stylianou.