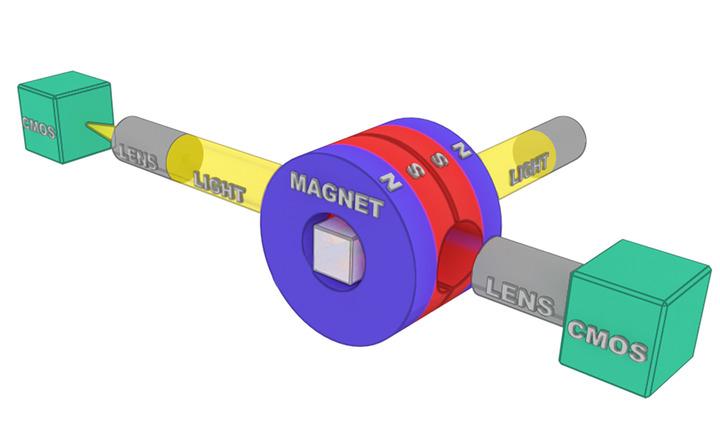 This is a schematic image of an experimental setup with a “magnetic well” trap for holding bio-objects. Credit: Vladislav A Parfenov et al // Biofabrication, 2018

After researching magnetic levitation in the conditions of microgravity, scientists from the Akson Russian Science Communication Association have found a new way to 3D-bioprint tissues.

The researchers believe that the new technology could be applied to create several biological constructs, including estimating the adverse effects of space radiation on astronauts in long-term space missions. The technology could also restore the function of damaged tissues and organs.

“During the period from 2010 to 2017, a series of unique experimental studies were carried out aboard the Russian Orbital Segment of the International Space Station at the experimental setup ‘Coulomb Crystal’,” Mikhail Vasiliev, the head of laboratory of dusty plasma diagnostics in the Joint Institute for High Temperatures of the Russian Academy of Sciences, said in a statement. “The main element of that device is an electromagnet that creates a special inhomogeneous magnetic field in which the structures of the diamagnetic particles [they are magnetized against the direction of the magnetic field] can be formed in the microgravity conditions.”

Most of the current methods for 3D-bioprinting use a certain layer-by-layer framework of the biological tissues, resulting in bulk material sent to an in incubator to continue cultivation.

There are also methods to 3D bioprint without using the multi-layer approach that use magnetic bioprinting, where the cell material is directed to the desired location through magnetic fields. For this method, the cells should be labeled in some way with magnetic nanoparticles.

However, the conventional methods to 3D bioprint are all limited by gravity.

In the new approach, dubbed formative three-dimensional biofactory, the researchers created 3D-biological objects without having to use the layer-by-layer approach or magnetic labels.

The team first reduced the influence of gravitational forces so that they can increase the power of magnetics that control the magnetic field. However, this approach considerably complicated the bioprinter.

Next, they reduced the gravity that enabled them to create 3D biological structures not in layers but immediately from all the sides.

To achieve this new approach, the researchers observed how small charged particles behave in the magnetic field of a special shape under micrgravity conditions, including zero gravity. They then developed a mathematical model of the process based on the methods of molecular dynamics, which help explain how to obtain homogeneous and extended 3D structures consisting of thousands of particles.

The study was published in Biofabrication.