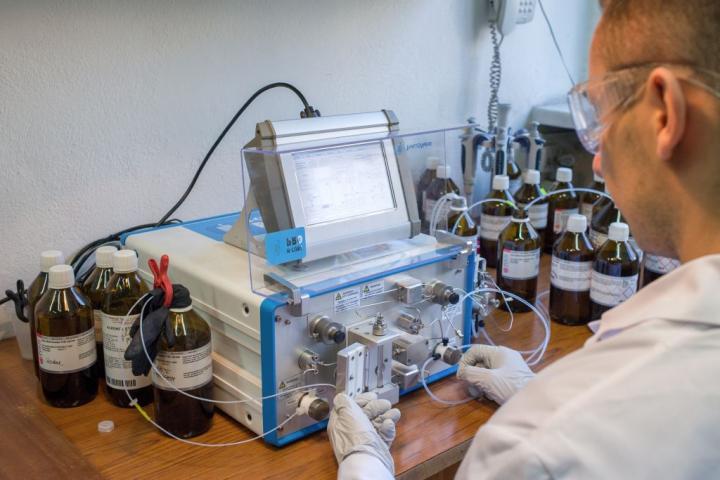 In microfluidic devices, the size of the catalyst nanoparticles can be modified interactively. Credit: IPC PAS, Grzegorz Krzyzewski

5, 10, or maybe 15? How many nanometers should nanoparticles of a catalyst be to optimize the course of the reaction? Researchers usually look for the answer by laborious, repetitive tests. At the Institute of Physical Chemistry of the Polish Academy of Sciences in Warsaw, a qualitatively new technique was developed to improve the process of such optimization in microfluidic systems. The size of the catalyst nanoparticles can now be changed interactively, during a continuous flow through the catalyst bed.

The performance of metal-carrier catalysts often depends on the size of metal nanoparticles. Usually, their size is determined over many consecutive, laborious tests. The method is not flexible enough: once reactions have started, nothing can be done with the catalyst. At the Institute of Physical Chemistry of the Polish Academy of Sciences (IPC PAS) in Warsaw, in the group of Dr. Jacinto Sa, a new technique was developed that allows for optimization of chemical reactions during the continuous microfluidic flow through the catalyst bed, and thus literally “on the fly”. This was achieved through interactive control of the size of the catalyst nanoparticles. Due to its simplicity and efficiency, this innovative technique should soon be used in the research on the new catalysts for the pharmaceutical and perfumery industries, among others.

“Flow catalysis is becoming more and more popular because it leads to the intensification of processes important for the industry. Our technique is the next step in this direction: we reduce the time needed to determine the sizes of catalyst nanoparticles. That means we can faster optimize the chemical reactions and even interactively change their course. An important argument here is also the fact that the entire process is carried out within a small device, so we reduce costs of additional equipment,” says Dr. Sa.

Scientists from the IPC PAS demonstrated their achievement with a system based on a commercially available flow microreactor, equipped with a replaceable cartridge with an appropriately designed metal catalyst. By electrolysis of water, the selected microreactor could supply hydrogen, necessary for the hydrogenation of chemical compounds in the flowing liquid, to the catalyst bed. The reaction medium was a solution of citral, an organic aldehyde compound with a lemon scent.

The nickel catalyst NiTSNH2 used in the experiment, in the form of a fine black powder, was previously developed at the IPC PAS. It consists of grains of polymeric resin covered with nickel nanoparticles. The grain size is approx. 130 micrometers and the nanoparticles of the catalyst are initially 3-4 nanometers.

“At the core of our achievement is to show how to modify the morphology of catalyst nanoparticles in a sequence with a chemical reaction. After each change in the size of the nanoparticles, we get immediate information about the effect of this modification on the catalyst activity. Therefore, it is easy to assess which nanoparticles are optimal for a given chemical reaction,” explains PhD student Damian Gizinski (IPC PAS).

In the system described in the journal ChemCatChem, the researchers increased the size of the catalyst nanoparticles to 5, 9 and 12 nm in a controlled manner. The growth effect was achieved by flushing the catalyst bed with an alcohol solution containing nickel ions. Within the bed, they were deposited on the existing nanoparticles and reduced under the influence of hydrogen. The final size of the nanoparticles depends here on the exposure time to the solution with Ni2+ ions.

In the reaction with citral, the best catalytic performances were attained with 9 nm nanoparticles. The researchers also observed that up to 9 nm the growth of nanoparticles favored the redirection of the reaction towards citronellal production, while above this value the pathway to the citronellol was preferred (differences resulted from the fact that smaller nanoparticles favored selective hydrogenation of unsaturated bond C=C, while larger ones activated both the bond C=C and the carbonyl bond C=O). These two compounds have slightly different properties: citronellal is used to repel insects, especially mosquitoes, and as an antifungal agent; citronellol not only repels insects but also attracts mites, it is also used to produce perfumes.

For potential applications of the new technique, it is important that after the modification, the catalysts were stable at least five hours in a continuous flow of the reaction solution, both in respect to its activity and selectivity.