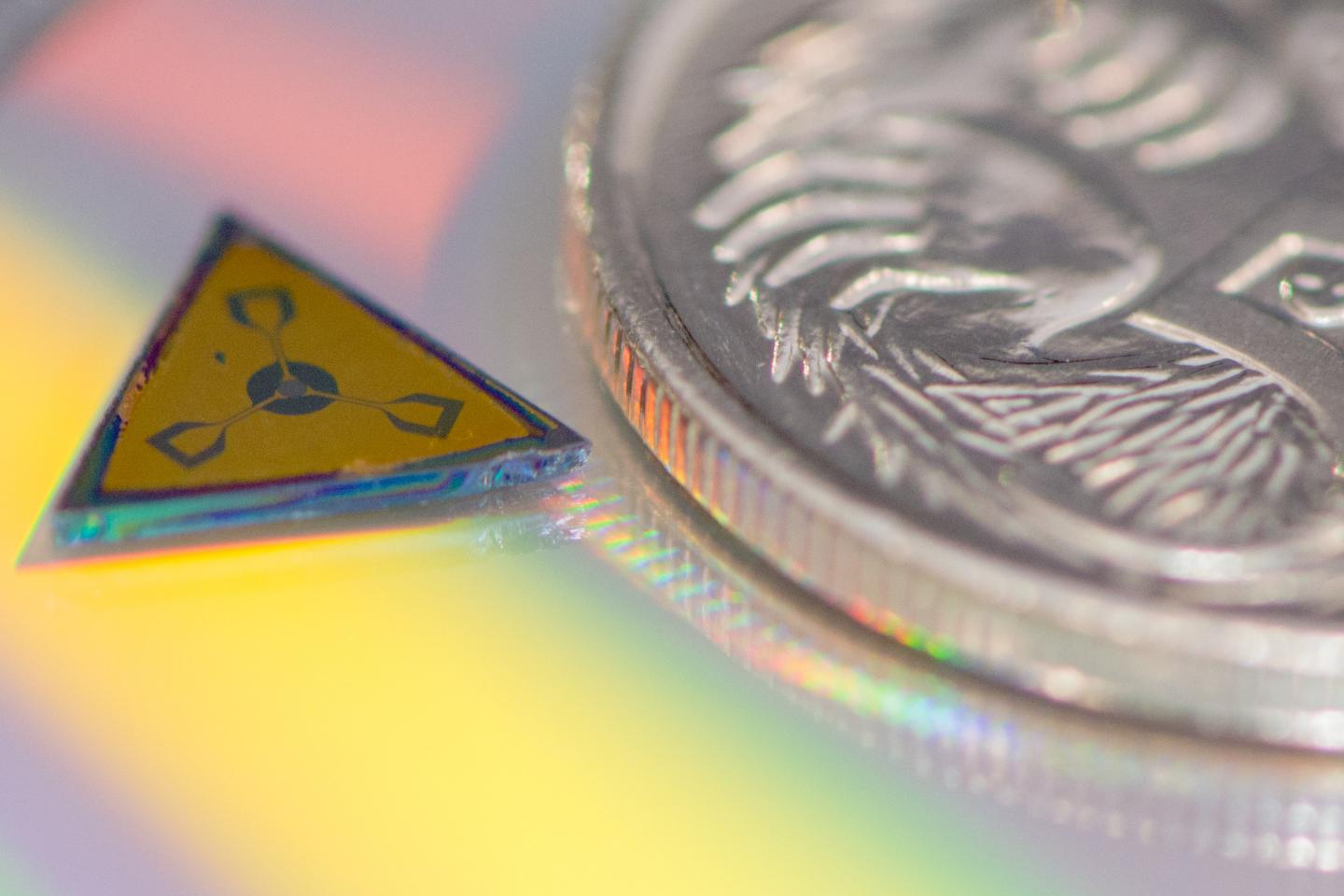 This is a prototype of the microwave circulator, next to an Australian five cent piece (19.41mm diameter).

A team at the University of Sydney and Microsoft, in collaboration with Stanford University in the US, has miniaturised a component that is essential for the scale-up of quantum computing. The work constitutes the first practical application of a new phase of matter, first discovered in 2006, the so-called topological insulators.

Beyond the familiar phases of matter – solid, liquid, or gas – topological insulators are materials that operate as insulators in the bulk of their structures but have surfaces that act as conductors. Manipulation of these materials provide a pathway to construct the circuitry needed for the interaction between quantum and classical systems, vital for building a practical quantum computer.

Theoretical work underpinning the discovery of this new phase of matter was awarded the 2016 Nobel Prize in Physics.

The Sydney team’s component, coined a microwave circulator, acts like a traffic roundabout, ensuring that electrical signals only propagate in one direction, clockwise or anti-clockwise, as required. Similar devices are found in mobile phone base-stations and radar systems, and will be required in large quantities in the construction of quantum computers. A major limitation, until now, is that typical circulators are bulky objects the size of your hand.

This invention, reported by the Sydney team today in the journal Nature Communications, represents the miniaturisation of the common circulator device by a factor of 1000. This has been done by exploiting the properties of topological insulators to slow the speed of light in the material. This minaturisation paves the way for many circulators to be integrated on a chip and manufactured in the large quantities that will be needed to build quantum computers.

The leader of the Sydney team, Professor David Reilly, explained that the work to scale-up quantum computing is driving breakthroughs in related areas of electronics and nanoscience.

“It is not just about qubits, the fundamental building blocks for quantum machines. Building a large-scale quantum computer will also need a revolution in classical computing and device engineering,” Professor Reilly said.

“Even if we had millions of qubits today, it is not clear that we have the classical technology to control them. Realising a scaled-up quantum computer will require the invention of new devices and techniques at the quantum-classical interface.”

Lead author of the paper and PhD candidate Alice Mahoney said: “Such compact circulators could be implemented in a variety of quantum hardware platforms, irrespective of the particular quantum system used.”

A practical quantum computer is still some years away. Scientists expect to be able to carry out currently unsolveable computations with quantum computers that will have applications in fields such as chemistry and drug design, climate and economic modelling, and cryptography.