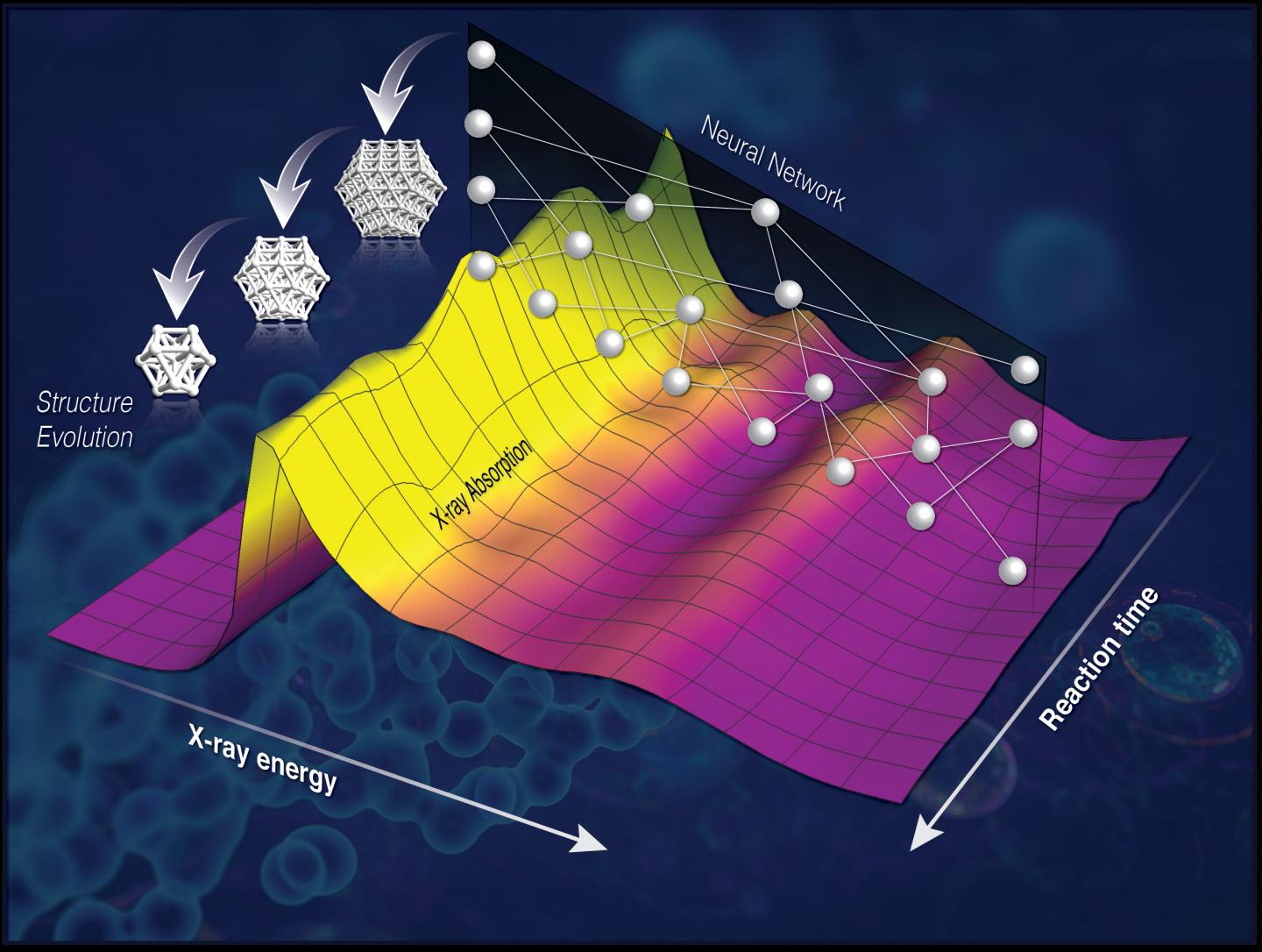 A sketch of the new method that enables fast, ‘on-the-fly’ determination of three-dimensional structure of nanocatalysts. The neural network converts the x-ray absorption spectra into geometric information (such as nanoparticle sizes and shapes) and the structural models are obtained for each spectrum. Source: Brookhaven National Laboratory

Chemistry is a complex dance of atoms. Subtle shifts in position and shuffles of electrons break and remake chemical bonds as participants change partners. Catalysts are like molecular matchmakers that make it easier for sometimes-reluctant partners to interact.

Now scientists have a way to capture the details of chemistry choreography as it happens. The method–which relies on computers that have learned to recognize hidden signs of the steps–should help them improve the performance of catalysts to drive reactions toward desired products faster.

The method–developed by an interdisciplinary team of chemists, computational scientists, and physicists at the U.S. Department of Energy’s Brookhaven National Laboratory and Stony Brook University–is described in a new paper published in the Journal of Physical Chemistry Letters. The paper demonstrates how the team used neural networks and machine learning to teach computers to decode previously inaccessible information from x-ray data, and then used that data to decipher 3D nanoscale structures.

“The main challenge in developing catalysts is knowing how they work–so we can design better ones rationally, not by trial-and-error,” said Anatoly Frenkel, leader of the research team who has a joint appointment with Brookhaven Lab’s Chemistry Division and Stony Brook University’s Materials Science Department. “The explanation for how catalysts work is at the level of atoms and very precise measurements of distances between them, which can change as they react. Therefore it is not so important to know the catalysts’ architecture when they are made but more important to follow that as they react.”

Trouble is, important reactions–those that create important industrial chemicals such as fertilizers–often take place at high temperatures and under pressure, which complicates measurement techniques. For example, x-rays can reveal some atomic-level structures by causing atoms that absorb their energy to emit electronic waves. As those waves interact with nearby atoms, they reveal their positions in a way that’s similar to how distortions in ripples on the surface of a pond can reveal the presence of rocks. But the ripple pattern gets more complicated and smeared when high heat and pressure introduce disorder into the structure, thus blurring the information the waves can reveal.

So instead of relying on the “ripple pattern” of the x-ray absorption spectrum, Frenkel’s group figured out a way to look into a different part of the spectrum associated with low-energy waves that are less affected by heat and disorder.

“We realized that this part of the x-ray absorption signal contains all the needed information about the environment around the absorbing atoms,” said Janis Timoshenko, a postdoctoral fellow working with Frenkel at Stony Brook and lead author on the paper. “But this information is hidden ‘below the surface’ in the sense that we don’t have an equation to describe it, so it is much harder to interpret. We needed to decode that spectrum but we didn’t have a key.”

Fortunately Yuewei Lin and Shinjae Yoo of Brookhaven’s Computational Science Initiative and Deyu Lu of the Center for Functional Nanomaterials (CFN) had significant experience with so-called machine learning methods. They helped the team develop a key by teaching computers to find the connections between hidden features of the absorption spectrum and structural details of the catalysts.

“Janis took these ideas and really ran with them,” Frenkel said.

The team used theoretical modeling to produce simulated spectra of several hundred thousand model structures, and used those to train the computer to recognize the features of the spectrum and how they correlated with the structure.

“Then we built a neural network that was able to convert the spectrum into structures,” Frenkel said.

When they tested to see if the method would work to decipher the shapes and sizes of well-defined platinum nanoparticles (using x-ray absorption spectra previously published by Frenkel and his collaborators) it did.

“This method can now be used on the fly,” Frenkel said. “Once the network is constructed it takes almost no time for the structure to be obtained in any real experiment.”

That means scientists studying catalysts at Brookhaven’s National Synchrotron Light Source II(NSLS-II), for example, could obtain real-time structural information to decipher why a particular reaction slows down, or starts producing an unwanted product–and then tweak the reaction conditions or catalyst chemistry to achieve desired results. This would be a big improvement over waiting to analyze results after completing the experiments and then figuring out what went wrong.

In addition, this technique can process and analyze spectral signals from very low-concentration samples, and will be particularly useful at new high flux and high-energy-resolution beamlines incorporating special optics and high-throughput analysis techniques at NSLS-II.