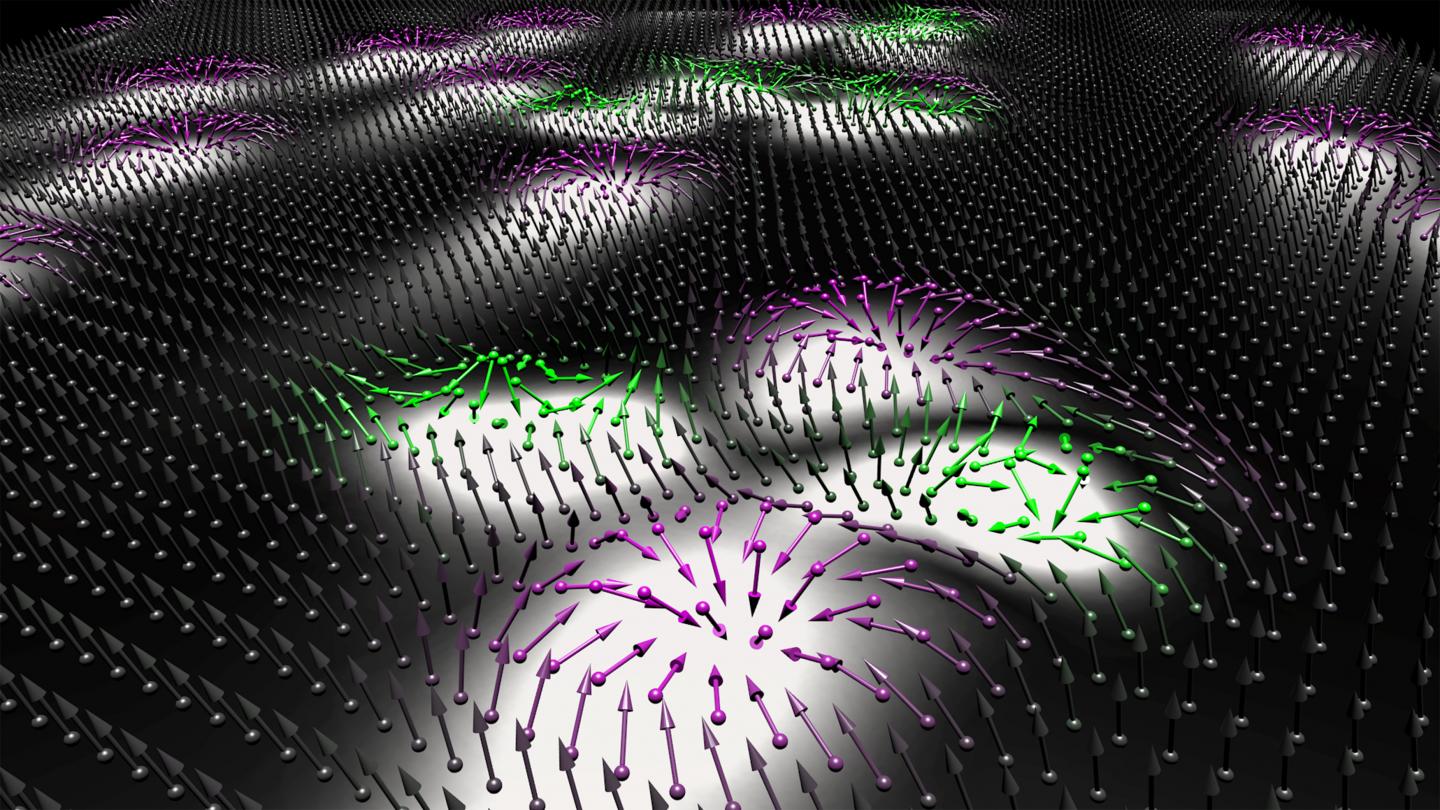 CAPTION Matter and antimatter in the nanoscale magnetic universe: A gas of skyrmions (purple) and antiskyrmions (green) generated from the trochoidal dynamics of a single antiskyrmion seed.

Moving electrons around in circuits is the basis for creating useful functions in electronics. But would their guiding principles still apply for positrons, the antiparticle version of electrons? Besides their scarcity in nature, basic electrodynamics suggests that everything would essentially function the same way with positive charges rather than the negative ones of electrons up to a difference in sign, since electrons and positrons move in opposite directions in electromagnetic fields.

However, this question remains open for nanoscale magnetic particles called skyrmions. Skyrmions represent whirls of magnetic moments that extend across a few nanometres and can be found in magnetic films a few atoms thick. In the same way that spheres and doughnuts have different topologies, skyrmions possess a special property called topological charge which plays a similar role to electric charges when their dynamics are concerned. For example, if an applied force causes skyrmions to be deflected toward the left, then that same force would lead antiskyrmions, their antiparticle counterpart, to deflect toward the right. Since the first experimental observations in 2009, skyrmions have been the focus of intense research because they offer new ways to store data and process information.

Now physicists at Uppsala University in Sweden, the Universities of Kiel and Mainz in Germany, and University Paris-Saclay in France have shown that much richer phenomena can occur in nanometre-thick ferromagnets in which both skyrmions and antiskyrmions coexist. By using state-of-the-art simulation techniques to compute the magnetic properties and dynamics in such films, they studied how skyrmions and antiskyrmions respond when electric currents are applied to exert a force on them. At low currents, the expected behaviour is seen where opposite topological charges get deflected in opposite directions as a result of the same applied forces. As the current is gradually increased, however, their motion no longer mirrors each other. While skyrmions continue to travel in straight lines, antiskyrmions begin to undergo curved trajectories, initially as transients and then continuously as the currents are further increased. In the latter the trajectories resemble trochoids, similar to the curve traced out by the pedal of a bicycle that is pedalled along a straight path. These striking results illustrate that opposite topological charges can in fact behave very differently.

But more surprises were still in store. By increasing the amount of energy transferred to the system from the applied currents, the researchers found that the trochoidal motion can evolve to skyrmion-antiskyrmions pairs being created periodically. Because they move differently, the skyrmions created readily propagate away while the trochoidal motion of antiskyrmions mean they remain more localized to where they are created. Remarkably, each antiskyrmion created subsequently becomes a new source of pairs, resulting in a proliferation of such particles. To put this into perspective, this is akin to sending a single positron through a strong magnetic field and getting a gas of electrons and positrons in return.

Moreover, the onset of trochoidal motion sets the ultimate speed limit of such topological charges, which is an important parameter in designing any future circuits using skyrmions. More fundamentally, the work may provide hints at solving a bigger mystery on cosmological scales, namely, why there is more matter than antimatter in the observable universe. After all, skyrmions are named after Tony Skyrme, a British physicist who proposed a quantum theory of particles based on ‘topological solitons’ – special nonlinear waves just like the whirls in magnetic skyrmions. Because of the asymmetry in the motion of skyrmion and antiskyrmions, the simulations show that there is always an excess of skyrmions after pair creation, so the imbalance between “matter” and “antimatter” in these ferromagnetic films is a natural consequence of their dynamics at high energies. In the nanoscale magnetic universe, at least, matter can arise naturally from a single antiparticle seed.

“The consequences of this theoretical work are potentially far-reaching, since the study suggests that antiskyrmions could be a ready source of skyrmions. This would be crucial for any application that uses skyrmions to transmit and store information.” says Ulrike Ritzmann, guest researcher at the Division of Materials Theory at Uppsala University.