If the 1967 film “The Graduate” were remade today, Mr. McGuire’s famous advice to young Benjamin Braddock would probably be updated to “Plastics … with nanoparticles.”

These days, the mechanical, electrical and durability properties of polymers — the class of materials that includes plastics — are often enhanced by adding miniature particles (smaller than 100 nanometers or billionths of a meter) made of elements such as silicon or silver. But could those nanoparticles be released into the environment after the polymers are exposed to years of sun and water — and if so, what might be the health and ecological consequences?

In a recently published paper, researchers from the National Institute of Standards and Technology (NIST) describe how they subjected a commercial nanoparticle-infused coating to NIST-developed methods for accelerating the effects of weathering from ultraviolet (UV) radiation and simulated washings of rainwater. Their results indicate that humidity and exposure time are contributing factors for nanoparticle release, findings that may be useful in designing future studies to determine potential impacts. 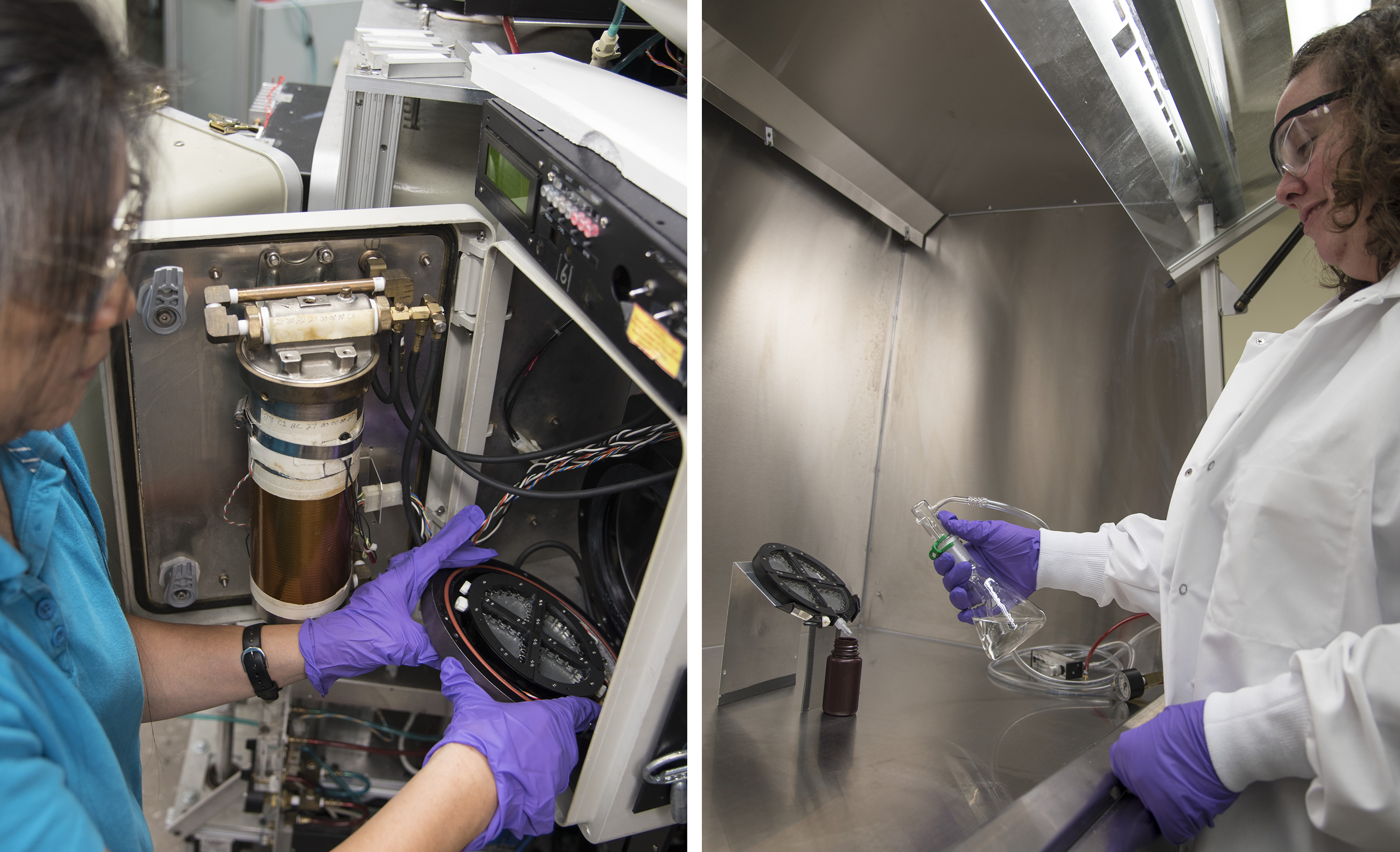 NIST researchers simulate “sun and rain” to determine if weathering causes polymer coatings to release the nanoparticles they contain into the environment. On the left, Li-Piin Sung places a commercially available polymer with silicon dioxide nanoparticles into a chamber of the NIST SPHERE, a device for accelerated weathering that in one day subjects samples to the equivalent of 10-15 days of outdoor exposure. On the right, Deborah Jacobs applies “NIST simulated rain” to the weathered sample to collect any shed nanoparticles in the runoff. Image: F. Webber/NIST

In their recent experiment, the researchers exposed multiple samples of a commercially available polyurethane coating containing silicon dioxide nanoparticles to intense UV radiation for 100 days inside the NIST SPHERE (Simulated Photodegradation via High-Energy Radiant Exposure), a hollow, 2-meter (7-ft.) diameter black aluminum chamber lined with highly UV reflective material that bears a casual resemblance to the Death Star in the film Star Wars. For this study, one day in the SPHERE was equivalent to 10 to 15 days outdoors. All samples were weathered at a constant temperature of 50 C (122 F) with one group done in extremely dry conditions (approximately 0 percent humidity) and the other in humid conditions (75 percent humidity).

To determine if any nanoparticles were released from the polymer coating during UV exposure, the researchers used a technique they created and dubbed “NIST simulated rain.” Filtered water was converted into tiny droplets, sprayed under pressure onto the individual samples, and then the runoff — with any loose nanoparticles — was collected in a bottle. This procedure was conducted at the beginning of the UV exposure, at every two weeks during the weathering run and at the end. All of the runoff fluids were then analyzed by NIST chemists for the presence of silicon and in what amounts. Additionally, the weathered coatings were examined with atomic force microscopy (AFM) and scanning electron microscopy (SEM) to reveal surface changes resulting from UV exposure.

Both sets of coating samples — those weathered in very low humidity and the others in very humid conditions — degraded but released only small amounts of nanoparticles. The researchers found that more silicon was recovered from the samples weathered in humid conditions and that nanoparticle release increased as the UV exposure time increased. Microscopic examination showed that deformations in the coating surface became more numerous with longer exposure time, and that nanoparticles left behind after the coating degraded often bound together in clusters.

“These data, and the data from future experiments of this type, are valuable for developing computer models to predict the long-term release of nanoparticles from commercial coatings used outdoors, and in turn, help manufacturers, regulatory officials and others assess any health and environmental impacts from them,” says NIST research chemist Deborah Jacobs, lead author on the study published in the Journal of Coatings Technology and Research.

This project resulted from a collaboration between NIST’s Engineering Laboratory and Material Measurement Laboratory. It is part of NIST’s work to help characterize the potential environmental, health and safety (EHS) risks of nanomaterials, and develop methods for identifying and measuring them.