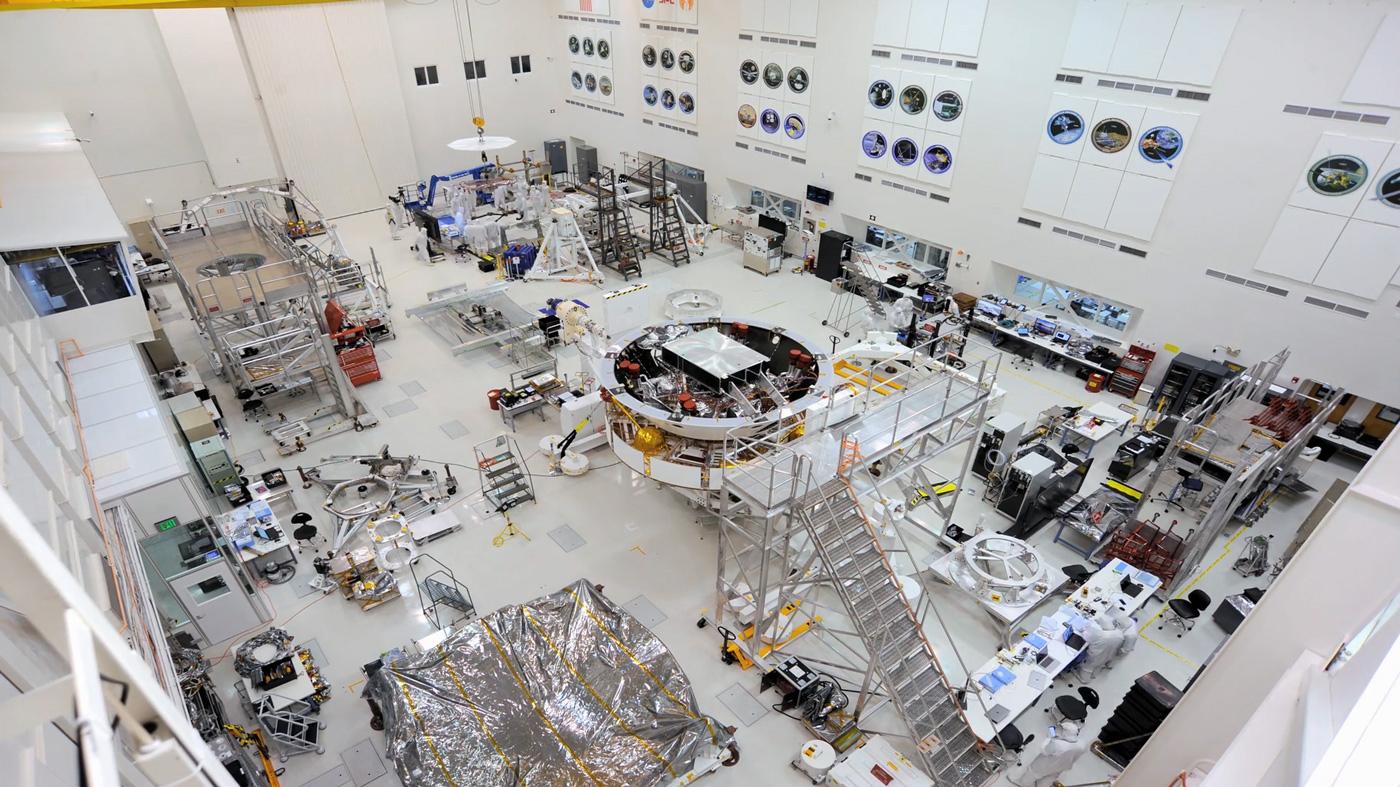 This image shows major components of NASA’s Mars 2020 mission in the High Bay 1 cleanroom in JPL’s Spacecraft Assembly Facility. In the center of Figure 1 is the Mars 2020 spacecraft stack attached to the Spacecraft Assembly Rotation Fixture (SCARF). JPL will build and manage operations of the Mars 2020 rover for the NASA Science Mission Directorate at the agency’s headquarters in Washington. Image: NASA/JPL-Caltech

For the past few months, the cleanroom floor in High Bay 1 at NASA’s Jet Propulsion Laboratory in Pasadena, California, has been covered in parts, components and test equipment for the Mars 2020 spacecraft, scheduled for launch toward the Red Planet in July of 2020.

But over the past few weeks, some of these components—the spacecraft-rocket-laden landing system and even the stand-in for the rover (christened “surrogate-rover”)—have seemingly disappeared.

In reality, they are still there, tucked neatly into the entry capsule, as they will be when it’s time for launch. The procedure is known as vehicle stacking and involves a hyper-detailed plan for what goes where and when.

“One of our main jobs is to make sure the rover and all the hardware that is required to get the rover from here on Earth to the surface of Mars fits inside the payload fairing of an Atlas V rocket, which gives us about 15 feet [5 meters] of width to work with,” said David Gruel, assembly, test and launch operations (ATLO) manager for Mars 2020 at JPL.

The first step is to place the rocket-powered descent stage on top of the surrogate rover (the real rover is being integrated and tested in tandem with the spacecraft stack). Then, when all the holes line up and everything is attached, checked and re-checked again, the back shell is lowered over them via gantry crane.

“That crane has lifted almost every spacecraft that’s come through JPL since Mariner,” said Gruel. “To safely lift the large pieces of the Mars 2020 spacecraft, we utilize a dozen technicians and engineers.”

After the back shell is in place and everything is determined to be fitting properly, the team puts on the parachute nose cone, which protects the parachute during atmospheric entry, followed by the massive doughnut-shaped cruise stage, which will power the Mars 2020 spacecraft on its seven-month voyage to the Red Planet. Then the vehicle stack is turned on its side so technicians and engineers have access to the mating points between the cruise and descent stages to make connections.

The stack is then returned to its original position (cruise stage on top) so the heat shield can be raised into position and attached.

“Stacking is an important milestone in mission development, because as good as our computer models are, we still need to put it together to show that the bolt holes line up and everything fits together,” said Gruel. “It is a great feeling for the entire project when we see the stack sitting there waiting to go for the next part of its journey, which will eventually lead to a launch pad at the Cape Canaveral in July of next year.”

After three weeks, stacking is finished on April 3, and the spacecraft is transported to JPL’s Environmental Test Facility to undergo acoustic testing. During this testing the stack will be bombarded with a thundering wall of sound designed to imitate the sound waves generated during launch.

Then, after a check to make sure no bolts have rattled loose or attachment points have become unstuck, the stack heads to the thermal vacuum chamber for a week-long test that simulates the harsh environment of space to assess how the Mars-bound craft and its instruments operate under flightlike conditions.

“Nothing is static with this mission,” said Gruel. “After the acoustic and thermal vac tests, the stacked spacecraft is returned to the assembly building for de-stack, then more testing and more work. Until the hold-down bolts on the Atlas rocket blow and our rover is headed to Mars in July of 2020, there is almost always something being assembled, tested or modified.”

The Mars 2020 rover will conduct geological assessments of its landing site on Mars, determine the habitability of the environment, search for signs of ancient Martian life, and assess natural resources and hazards for future human explorers.

Scientists will use the instruments aboard the rover to identify and collect samples of rock and soil, encase them in sealed tubes and leave them on the planet’s surface for potential return to Earth on a future Mars mission.

The Mars 2020 Project at JPL manages rover development for the Science Mission Directorate at NASA Headquarters in Washington. NASA’s Launch Services Program, based at the agency’s Kennedy Space Center in Florida, is responsible for launch management.