Researchers at EPFL have found a way to implement an optical sensing system by using spatial multiplexing, a technique originally developed in optical-fiber communication.

Ultrashort optical pulses are becoming more and more relevant in a number of applications including distance measurement, molecular fingerprinting and ultrafast sampling.

Many of these applications rely not only on a single stream of pulses — also known as “optical frequency combs” — but require two or even three of them. Nonetheless, these multi-comb approaches significantly speed up acquisition time over conventional techniques.

Furthermore, the relative timing of pulse trains and their phases must be very well synchronized, which requires active electronics that synchronize the lasers.

In a new paper published in Nature Photonics, the research team of Tobias J. Kippenberg at EPFL, together with the group of Michael Gorodetsky at the Russian Quantum Centre, has developed a much simpler method to generate multiple frequency combs. 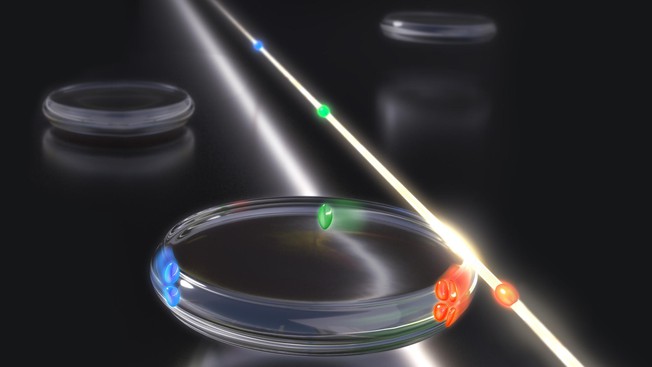 The microresonator consists of a crystalline disk of a few millimeters in diameter. The disk traps a continuous laser light and converts it into ultrashort pulses — solitons — thanks to the special nonlinear properties of the device. The solitons travel around the microresonator 12 billion times per second. At every round, a part of the soliton exits the resonator, producing a stream of optical pulses.

The microresonator the researchers used here has a special property in that it allows the light to travel in the disk in multiple different ways, called spatial modes of the resonator.

By launching continuous lightwaves in several modes at the same time, multiple different soliton states can be obtained simultaneously. In this way, the scientists were able to generate up to three frequency combs at the same time.

The working principle is the same as spatial multiplexing used in optical fiber communication: the information can be sent in parallel on different spatial modes of a multimode fiber. Here, the combs are generated in distinct spatial modes of the microresonator.

The method has several advantages, but the primary one is that it does not require complex synchronization electronics.

“All the pulses are circulating in the same physical object, which reduces potential timing drift, as encountered with two independent pulsed lasers,” explains Erwan Lucas, first author of the paper.

“We also derive all the continuous waves from the same initial laser by using a modulator, which removes the need for phase synchronization.”

Using this multiplexing scheme, the team demonstrated several applications, such as dual-comb spectroscopy, or rapid optical sampling. The acquisition time could be adjusted between a fraction of a millisecond to 100 nanoseconds.

The authors are now working on developing a new demonstration with the triple-comb source.

“We had not planned for a demonstration, as we did not expect our scheme to work so easily,” says Lucas. “We are obviously working on it.”

The technology can be integrated with both photonic elements and silicon microchips. Establishing multi-comb generation on a chip may catalyze a wide variety of applications such as integrated spectrometers or LIDAR, and could make optical sensing far more accessible.