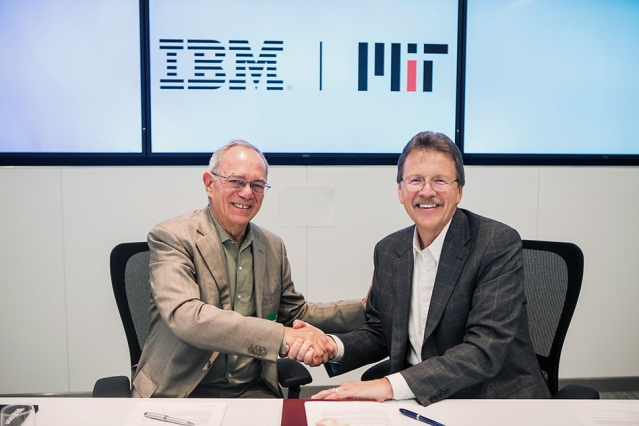 A pair of research titans are partnering on a new laboratory to pursue joint research in artificial intelligence (AI).

IBM announced on Sept. 7 a partnership with the Massachusetts Institute of Technology (MIT) and a 10-year, $240 million investment to create the MIT-IBM Watson AI Lab with the aim of advancing AI hardware, software and algorithms related to several areas, including deep learning.

“The field of artificial intelligence has experienced incredible growth and progress over the past decade,” John Kelly III, IBM senior vice president, Cognitive Solutions and Research, said in a statement. “Yet today’s AI systems, as remarkable as they are, will require new innovations to tackle increasingly difficult real-world problems to improve our work and lives.

“The extremely broad and deep technical capabilities and talent at MIT and IBM are unmatched and will lead the field of AI for at least the next decade,” he added.

The partnership will also aim to increase AI’s impact on industries, including health care and cybersecurity and explore the economic and ethical implications of artificial intelligence on society.

The new lab will mobilize more than 100 scientists, professor and students who specialize in artificial intelligence to pursue research at IBM’s Research Lab in Cambridge, Mass.

The researchers plan on inventing new algorithms that not only leverage big data, but also learn from limited data to augment human intelligence.

The lab will also investigate new hardware materials, devices and architectures to support future analog computational approaches to AI model training and deployment, as well as the intersection of quantum computing and machine learning.

AI may also be used to explore applications to improve security and the privacy of medical data, personalization of health care, image analysis and the optimum treatment paths of specific patients.

The new lab will encourage MIT faculty and students to launch companies that focus on commercializing inventions and technologies developed at the lab.

IBM and MIT have long, proven histories in AI research and have partnered in the past. In 2016, IBM Research announced a multi-year collaboration with MIT’s Department of Brain and Cognitive Sciences to advance the scientific field of machine vision, a core aspect of artificial intelligence.

IBM, MIT and Harvard University have also partnered on a five-year, $50 million research collaboration on AI and genomic projects.

The lab will be co-chaired by Dario Gil, IBM Research VP of AI and IBM Q, and Anantha P. Chandrakasan, dean of MIT’s School of Engineering.