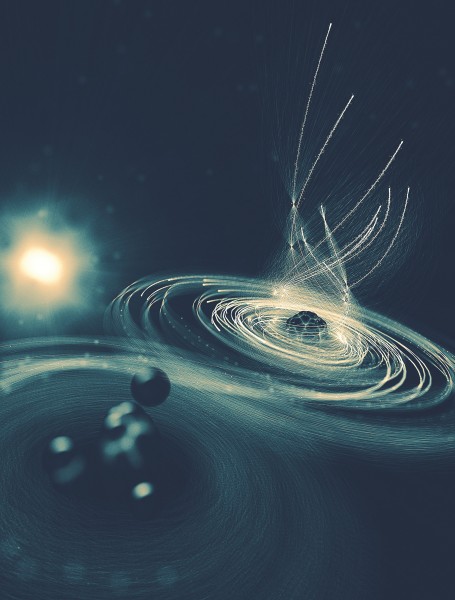 DESY/Science Communication Lab The extremely intense X-ray flash knocks so many electrons out of the iodine atom (right) such that it pulls in the electrons of the methyl group (left) like an elecetromagnetic version of a black hole, before finally spitting them out.

When scientists at the Department of Energy’s SLAC National Accelerator Laboratory focused the full intensity of the world’s most powerful X-ray laser on a small molecule, they got a surprise: A single laser pulse stripped all but a few electrons out of the molecule’s biggest atom from the inside out, leaving a void that started pulling in electrons from the rest of the molecule, like a black hole gobbling a spiraling disk of matter.

Within 30 femtoseconds – millionths of a billionth of a second – the molecule lost more than 50 electrons, far more than scientists anticipated based on earlier experiments using less intense beams, or isolated atoms. Then it blew up.

The results, published today in Nature, give scientists fundamental insights they need to better plan and interpret experiments using the most intense and energetic X-ray pulses from SLAC’s Linac Coherent Light Source (LCLS) X-ray free-electron laser. Experiments that require these ultrahigh intensities include attempts to image individual biological objects, such as viruses and bacteria, at high resolution. They are also used to study the behavior of matter under extreme conditions, and to better understand charge dynamics in complex molecules for advanced technological applications.

“For any type of experiment you do that focuses intense X-rays on a sample, you want to understand how it reacts to the X-rays,” said Daniel Rolles of Kansas State University. “This paper shows that we can understand and model the radiation damage in small molecules, so now we can predict what damage we will get in other systems.”

The experiment, led by Rolles and Artem Rudenko of Kansas State, took place at LCLS’s Coherent X-ray Imaging instrument. CXI delivers X-rays with the highest possible energies achievable at LCLS, known as hard X-rays, and records data from samples in the instant before the laser pulse destroys them.

How intense are those X-ray pulses?

“They are about a hundred times more intense than what you would get if you focused all the sunlight that hits the Earth’s surface onto a thumbnail,” said LCLS staff scientist and co-author Sebastien Boutet.

For this study, researchers used special mirrors to focus the X-ray beam into a spot just over 100 nanometers in diameter – about a hundredth the size of the one used in most CXI experiments, and a thousand times smaller than the width of a human hair. They looked at three types of samples: individual xenon atoms, which have 54 electrons each, and two types of molecules that each contain a single iodine atom, which has 53 electrons.

Heavy atoms around this size are important in biochemical reactions, and researchers sometimes add them to biological samples to enhance contrast for imaging and crystallography applications. But until now, no one had investigated how the ultra-intense CXI beam affects molecules with atoms this heavy.

The team tuned the energy of the CXI pulses so they would selectively strip the innermost electrons from the xenon or iodine atoms, creating “hollow atoms.” Based on earlier studies with less energetic X-rays, they thought cascades of electrons from the outer parts of the atom would drop down to fill the vacancies, only to be kicked out themselves by subsequent x-rays. That would leave just a few of the most tightly bound electrons. And, in fact, that’s what happened in both the freestanding xenon atoms and the iodine atoms in the molecules.

But in the molecules, the process didn’t stop there. The iodine atom, which had a strong positive charge after losing most of its electrons, continued to suck in electrons from neighboring carbon and hydrogen atoms, and those electrons were also ejected, one by one.

Rather than losing 47 electrons, as would be the case for an isolated iodine atom, the iodine in the smaller molecule lost 54, including the ones it grabbed from its neighbors – a level of damage and disruption that’s not only higher than would normally be expected, but significantly different in nature.

“We think the effect was even more important in the larger molecule than in the smaller one, but we don’t know how to quantify it yet,” Rudenko said. “We estimate that more than 60 electrons were kicked out, but we don’t actually know where it stopped because we could not detect all the fragments that flew off as the molecule fell apart to see how many electrons were missing. This is one of the open questions we need to study.”

For the data analyzed to date, the theoretical model provided excellent agreement with the observed behavior, providing confidence that more complex systems can now be studied, said LCLS director Mike Dunne. “This has important benefits for scientists wishing to achieve the highest resolution images of biological molecules (for example, to inform the development of better pharmaceuticals). These experiments also guide the development of a next-generation instrument for the LCLS-II upgrade project, which will provide a major leap in capability due to the increase in repetition rate from 120 pulses per second to 1 million.”