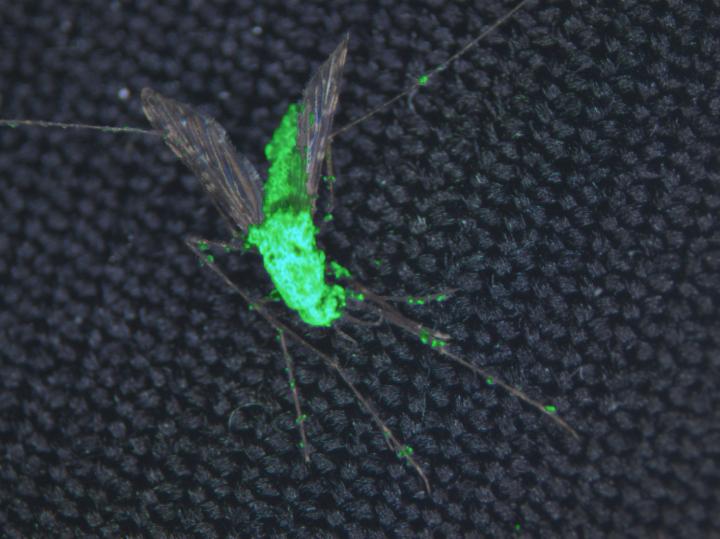 This composite image shows a dead female Anopheles gambiaeMetarhizium pingshaense, which has been engineered to produce spider and scorpion toxins. The fungus is also engineered to express a green fluorescent protein for easy identification of the toxin-producing fungal structures. Credit: Brian Lovett

Malaria kills nearly half a million people every year, according to the World Health Organization (WHO). In some of the hardest-hit areas in sub-Saharan Africa, the mosquitoes that carry the malaria parasite have become resistant to traditional chemical insecticides, complicating efforts to fight the disease.

A new study from the University of Maryland and colleagues from Burkina Faso, China and Australia suggests that a mosquito-killing fungus genetically engineered to produce spider and scorpion toxins could serve as a highly effective biological control mechanism to fight malaria-carrying mosquitoes. The fungus is specific to mosquitoes and does not pose a risk to humans. Further, the study results suggest that the fungus is also safe for honey bees and other insects. The study was published online in the journal Scientific Reportson June 13, 2017.

“In this paper, we report that our most potent fungal strains, engineered to express multiple toxins, are able to kill mosquitoes with a single spore,” said Brian Lovett, a graduate student in the UMD Department of Entomology and a co-author of the paper. “We also report that our transgenic fungi stop mosquitoes from blood feeding. Together, this means that our fungal strains are capable of preventing transmission of disease by more than 90 percent of mosquitoes after just five days.”

The researchers used the fungus Metarhizium pingshaensei, which is a natural killer of mosquitoes. The fungus was originally isolated from a mosquito and previous evidence suggests that the fungus is specific to disease-carrying mosquito species, including Anopheles gambiae and Aedes aegypti. When spores of the fungus come into contact with a mosquito’s body, the spores germinate and penetrate the insect’s exoskeleton, eventually killing the insect host from the inside out.

On its own, however, the fungus requires fairly high doses of spores and a large amount of time to have lethal effects. To boost the fungus’ deadly power, the researchers engineered the fungus with several genes that express neurotoxins from spider and scorpion venom–both alone and in combination with other toxins. The toxins act by blocking the calcium, potassium and/or sodium channels required for the transmission of nerve impulses.

The researchers then tested the engineered fungal strains on wild-caught, insecticide-resistant mosquitoes in Burkina Faso. Each engineered strain killed mosquitoes more quickly and efficiently than the unaltered fungus. But the most effective strain used a combination of two toxins, one derived from the North African desert scorpion Androctonus australis and another derived from the Australian Blue Mountains funnel-web spider Hadronyche versuta. The scorpion toxin blocks sodium channels, while the spider toxin blocks both potassium and calcium channels. Both of these toxins have already been approved by the U.S. Environmental Protection Agency for insecticidal use.

“The WHO has identified insecticide resistance as the major threat to effective mosquito control, which is relevant not only to malaria but to a number of mosquito-borne diseases such as dengue, yellow fever, viral encephalitis and filariasis,” said Raymond St. Leger, a Distinguished University Professor in the UMD Department of Entomology and senior author of the study. “Unlike chemical insecticides that target only sodium channels, many spider and scorpion toxins hit the nervous system’s calcium and potassium ion channels, so insects have no pre-existing resistance.”

When Lovett, St. Leger and their colleagues inserted the toxin genes into the Metarhizium fungus, they included an additional failsafe: a highly specific promoter sequence, or genetic “switch,” which ensures that the toxin genes can only be activated in the blood of insects. As a result, the fungus will not release the toxin into the environment.

To further ensure the safety of non-target insect species, the researchers also tested the engineered fungal strains on honey bees. Working in Burkina Faso, the team deliberately infected local bees using both passive methods (exposing the bees to spore-coated fabric) and direct methods (spraying the bees with spores suspended in liquid). After two weeks, no bees had died as a result of the toxin-boosted fungus.

“The toxins we’re using are potent, but totally specific to insects. They are only expressed by the fungus when in an insect. Additionally, the fungus does nothing at all to bees and other beneficial species,” St. Leger said. “So we have several different layers of biosecurity at work.”

Encouraged by the results of the current study, the researchers plan to expand their on-the-ground testing regimen in Burkina Faso. Currently, the team is testing the spores on mosquitoes contained in a custom-built enclosure that resembles a greenhouse, with walls made of netting instead of glass. The researchers are also testing the fungus on insect species that are closely related to mosquitoes, such as midges and gnats, to ensure that the fungus is completely safe for non-target insects. Eventually, the team hopes to deploy the spores in the field, on wild mosquito populations.

“This is our first in-depth study of the effects toxin-expressing fungi have on mosquitoes, beyond their ability to kill faster. This is also our broadest characterization of our arsenal of insect-killing spider and scorpion toxins,” Lovett said. “Our results directly extend our understanding of how these technologies may be used in the field against mosquito pests.”